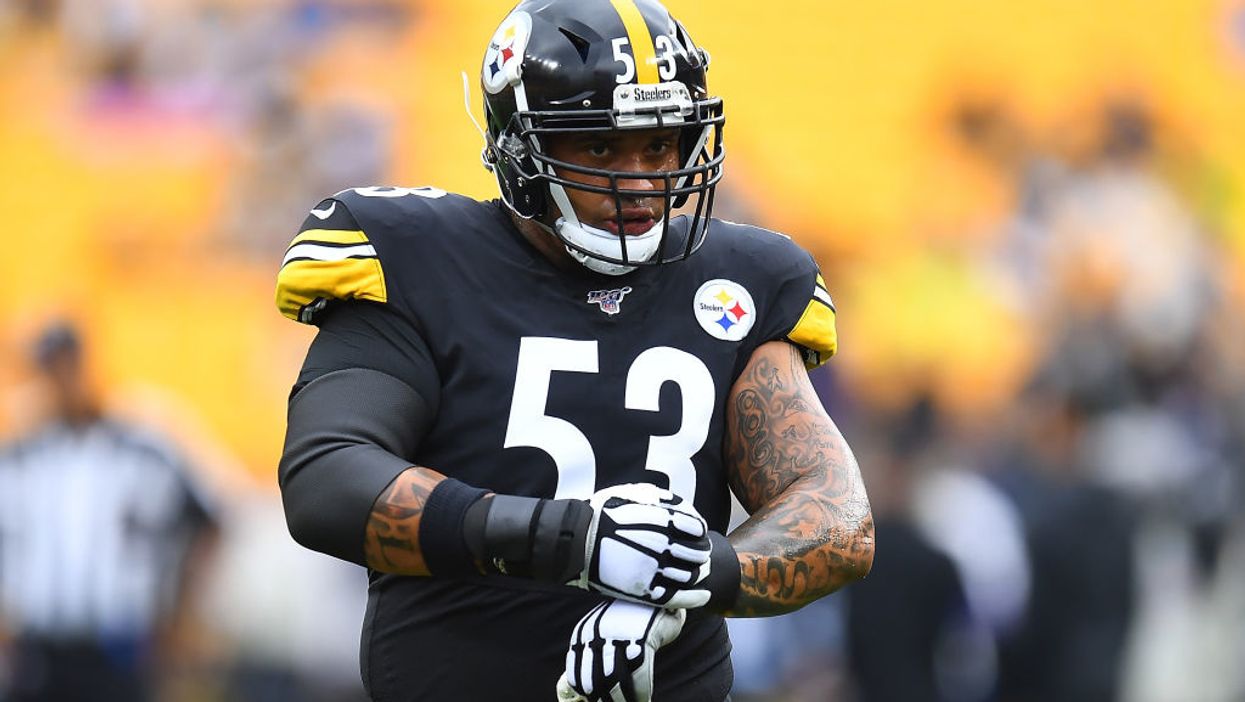 Pittsburgh Steelers center and co-captain Maurkice Pouncey said earlier this week that he was "unaware of the whole story" about the teen that the team was honoring. Pouncey said, "Moving forward, I will make my own decision about what to wear on the back of my helmet." For Sunday's Steelers game, Pouncey made his decision to pay tribute to a fallen police officer.

The Steelers announced that the team would honor Antwon Rose Jr., a Pittsburgh teen who was shot and killed by a police officer minutes after he was pulled over in a car that was reportedly involved in a drive-by shooting of two men. Steelers players will have the name "Antwon Rose Jr." on the back of their helmets.

Pouncey, who wore Rose's name on his helmet in the Week 1 game before learning about possible involvement in a drive-by shooting, wore the name "Eric Kelly" on his helmet this week.

Erick Kelly is one of three police officers who were killed and two others who were injured in a 2009 standoff in the Stanton Heights neighborhood of Pittsburgh. Pittsburgh police officers responded to a domestic violence call, where a heavily armed 22-year-old man, who was reportedly wearing a bulletproof vest, fired at the cops from a barricaded house.

"Some of the wounded officers remained for a time where they fell because other officers could not reach them with bullets continuing to fly over their heads," according to Diane Richard, Pittsburgh Police spokeswoman.

"Tell my wife and kids I love them," a wounded Kelly told Officer Timothy McManaway before passing away.

Officer Kelly, a 14-year veteran of the force, was married and had three daughters, ages 11, 16, and 22. The other slain officers were Stephen Mayhle and Paul Sciullo II.

It took more than four hours for over 100 officers from the city, the state, the district attorney's office, the Port Authority, and the FBI to apprehend the shooter, Richard "Pop" Poplawski. He was armed with an AK-47 rifle, a .357 Magnum revolver, a .380-caliber handgun, and a .45-caliber handgun.

Despite the Steelers claiming that Pittsburgh players and coaches were "united as one to wear a single name on the back of their helmets and hats for the entire 2020 season," other players have decided not to wear Rose's name on their helmets.

On Sunday, Steelers running back Benny Snell wore "Breonna Taylor" on the back of his helmet, according to the Pittsburgh Tribune-Review.

Pittsburgh quarterback Ben Roethlisberger had the phrase "It Takes All of Us" written on his helmet. Defensive tackle Cameron Heyward, running back James Conner, and wide receiver Diontae Johnson had "End Racism" written on their helmets.

Pittsburgh defensive end Stephon Tuitt and wide receiver James Washington reportedly did not have any names on their helmets. In July, Tuitt announced that he would not be kneeling during the national anthem during games.

Earlier this week, Steelers safety Minkah Fitzpatrick revealed that the decision to honor Antwon Rose Jr. came from upper management and not players.

"It was made from people upstairs and everything else like that," Fitzpatrick said. "Don't know exactly who. Don't know exactly how. But we did. We knew that we were going to have somebody on the back of our helmets, and it wasn't exactly clear on what it was going to be. It was mostly made by everyone upstairs."