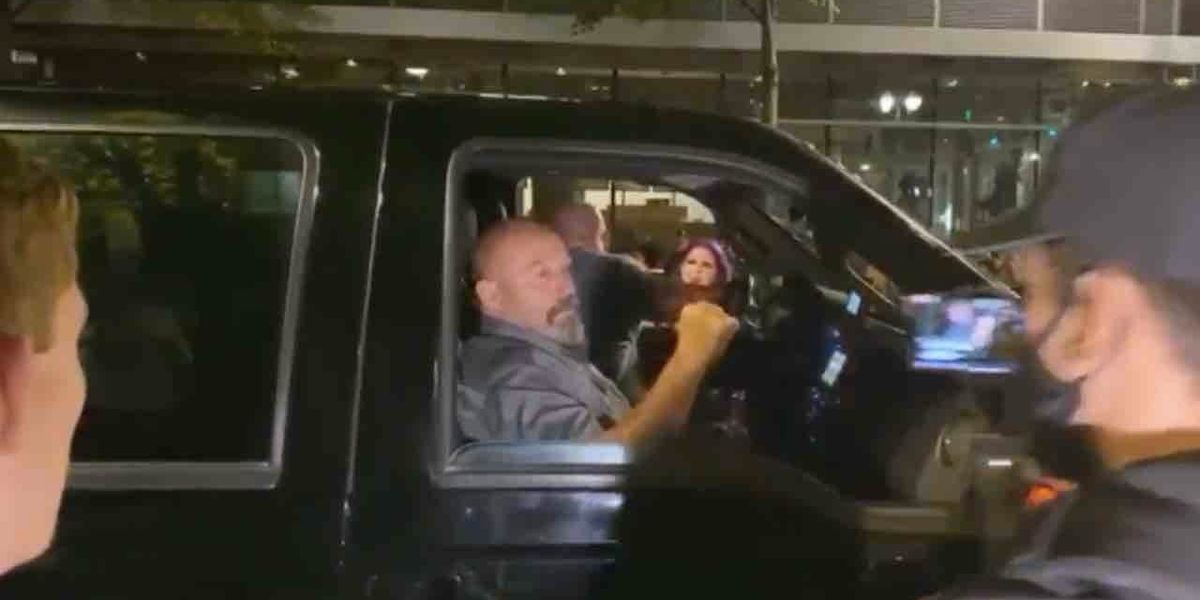 Sitcom actor Anthony Anderson may have been joking when he angrily ordered Emmys host Jimmy Kimmel to chant "Black Lives Matter!" with him louder and louder onstage at the audience-less awards show Sunday night, but leftists in Portland weren't speaking in jest when they gave the same command to a truck passenger over the weekend.

The camera focuses on the truck's passenger being confronted by the mob as its members order to him to "say Black Lives Matter, homie!"

The man — who in any other situation might appear imposing with his bald head and facial hair — meekly raises his fist but apparently isn't able to say the magic words.

"It lets us know that you're cool!" another voice shouts from the crowd, offering the man a reason for repeating the phrase.

"You put the fist up, and you've got to say Black Lives Matter!" a voice instructs him.

At one point the man apparently insists that he did say the phrase, but one of the leftists isn't convinced: "I didn't hear s**t, bro!"

"Loud and proud!" a voice hollers.

Finally the truck passenger apparently satisfies the leftists, and the mob appears to back off: "OK, I appreciate it," one voice says before the clip ends.

A subsequent clip from Shackleford shows what appears to be the same truck with its passenger window smashed out — and the man who apparently was behind the wheel during the earlier confrontation walks toward the vehicle and discovers the damage.

He is not pleased.

It's worth pointing out that if anyone from the mob surrounding the truck earlier told the driver to put up his fist and say "Black Lives Matter," he didn't play along.

Soon the furious man is seen sprinting down a sidewalk, presumably to find the culprit who damaged his truck.

The truck was smashed up later. #PortlandRiots #BLM #antifa https://t.co/NZk8nzoLdE

Back where we started, here we go around again

It probably won't surprise you that this wasn't the first time militant leftists took to the streets and demanded verbal tolls before letting motorists pass.

A few months ago, one unhinged protester on a Maryland street near Interstate 270 was caught on video screaming a question at passing cars: "Do black lives matter to you?!"

When a woman driver apparently ignored the question, the protester ran after the vehicle and screamed obscenities at the "Karen." Then other protesters joined in the fray and began assembling near the vehicle: "She ain't goin' nowhere ..." a male declared as a protester banged on the hood of the SUV.

The clip ends before we get to see how it was resolved.