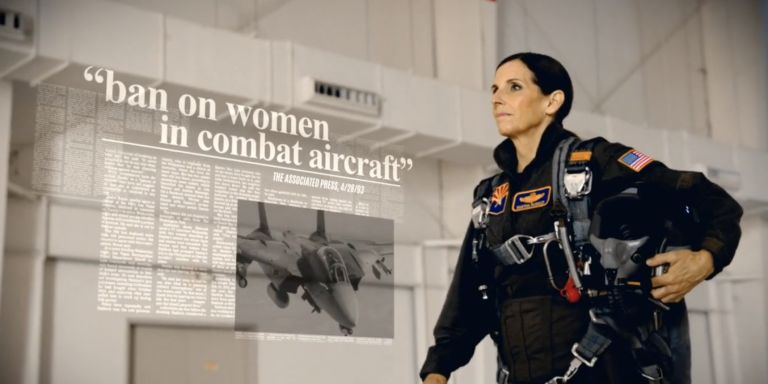 Arizona Republican senator Martha McSally is highlighting her biography as a trail-blazing female Air Force pilot who overcame family tragedy and sexual assault in a new ad out Monday, as she seeks to close a polling deficit against her Democratic opponent Mark Kelly.

The ad gives a softer, more personal view of McSally—and is a contrast to some of her prior gloves-off ads. It portrays her as a "fighter" compared with "flashy" Mark Kelly, a former astronaut and gun-control activist.

"Then I became the first woman to fly a fighter jet in combat and help lead the air war after 9/11. America faces serious challenges, but we will overcome them," continued McSally. "If you want flashy, you’ve got a guy. But if you want a fighter, I’m your girl."

A poll released last week by OH Predictive Insights showed McSally trailing Kelly 42 percent to 52 percent. Another Sept. 17 poll by Monmouth found a slightly closer race, with Kelly leading by six points. The special election race has taken on new national significance after the death of Supreme Court justice Ruth Bader Ginsburg. If Kelly wins, he could be confirmed early to the Senate in December, potentially costing Republicans a crucial vote in the fight to confirm President Donald Trump’s Supreme Court pick after the election.

The new ad will run on TV and online, according to her campaign.

McSally served in the U.S. Air Force in Iraq and Afghanistan, becoming the first female combat pilot to lead a fighter squadron. She ran unsuccessfully for Senate against Sen. Kyrsten Sinema (D.) in 2018, but was later appointed to fill John McCain’s seat after his death in December 2018.

She has spoken out about her experience as a victim of sexual assault by her high school track coach at age 17 and later by a superior officer in the Air Force.

McSally’s ads have previously criticized her opponent Kelly for his business interests in China, including an investment in one of his companies by controversial Chinese tech giant Tencent.