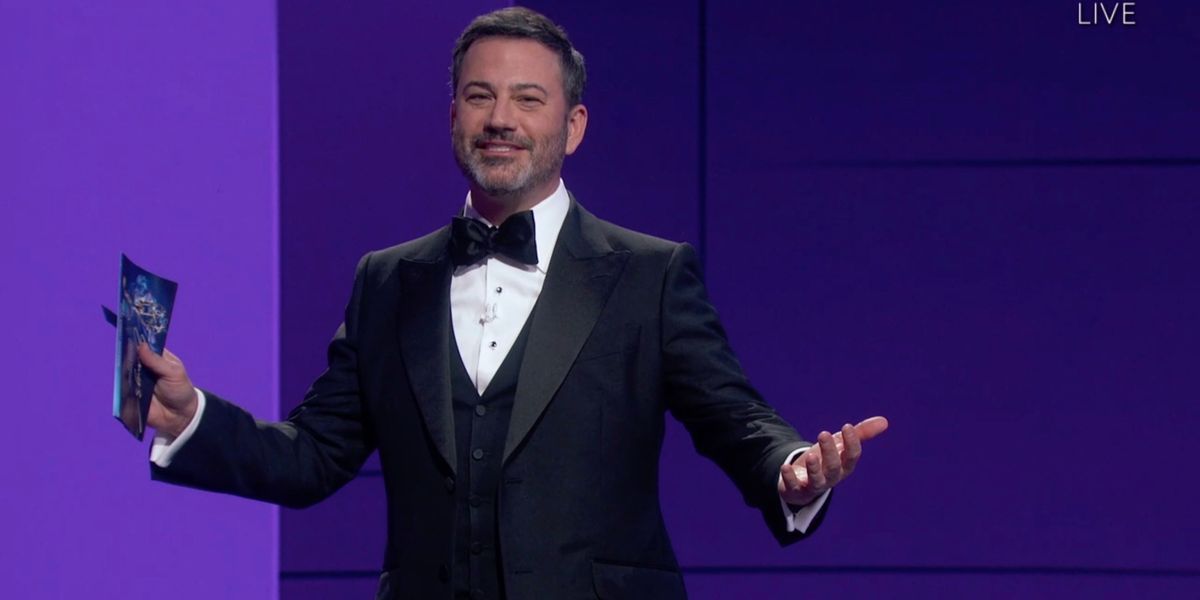 The awards show was held virtually, and the nominees — dressed in typically ostentatious awards ceremony garb — livestreamed themselves from their homes in a production that resembled a vast conference call.

What did Kimmel say?

Kimmel, following news that he lost the Emmy for Outstanding Variety Talk Series to British TV host John Oliver, made a joke about calling Immigration and Customs Enforcement on Oliver.

Oliver's show — which is broadcast on HBO — has won the award for the last five years.

As highlighted by the
Daily Mail, Kimmel quipped, "Congratulations again to John Oliver. I will be reporting him to ICE."

In response, social media said that Kimmel was guilty of using "white privilege" in making such an off-handed remark.

The great David @Letterman hitchhikes to the #Emmys! https://t.co/nkvp11TyvB

A bevy of social media users took to their respective channels to condemn Kimmel for the remark.

One user wrote, "The amount of white privilege it took for jimmy kimmel to get up on stage at a nationally televised event and make a joke about ice and not have one tell him that it isn't okay, is absolutely astonishing to me."

Another added, "[I] don't think Kimmel is all that funny. Particularly when he jokes about ICE and the systemic terror that they cause, or any of his other highly weird jokes."

"My dad was deported," another user wrote. "He was literally placed on a plane with two federal agents. He was in chains. He was dropped off at Heathrow Airport and that's it."

Another user complained, "I didn't know that it was needed, but @jimmykimmel making a joke about calling #ICE on @iamjohnoliver is not only poor taste, but completely out of touch w/ everything happening right now."

"Happy Hispanic Heritage Month from the #Emmy's where the only Latinx representation we got was Count von Count ft. Lin Manuel [and] America Ferrara presenting an award and Jimmy Kimmel's tasteless and hurtful ICE joke," another user said.

Another added, "[J]immy kimmel should be kicked off the show for making an ice joke."

Kimmel has yet to respond to the ensuing controversy at the time of this reporting.

Of note, Oliver became an American citizen in December.

In June, Kimmel
admitted to benefiting from white privilege.

During a monologue on "Jimmy Kimmel Live!" the longtime TV host said that he understood the damage caused by the notion of white privilege and said that he and other white people shouldn't be offering insight on the police killing of George Floyd, who died the last week in May.

"Over the past week, I've been hearing, I've been reading very thoughtful posts and words from very smart people, some of whom say white people shouldn't be talking right now, they should be listening. And I get that," he said during the monologue. "And I don't disagree with that. But I'm the only one here and it's a talk show. So, I want to share what I've been thinking about and trying to sort through."

“I know that a lot of white people bristle when they hear the word 'privilege,' as in 'white privilege,' because there are millions of white people who didn't grow up with money, or a good education, or a solid family background, or maybe even a family at all," he said. "So when they hear the word 'privilege,' they go, 'What privilege? ... You hear the phrase 'white privilege' and it's easy to get defensive. The first time I heard it, I did. To me, white privilege was what Donald Trump had, a wealthy father and a silver spoon in his mouth. It wasn't what I grew up with, so I rejected it because I didn't understand what white privilege meant. But I think I do now. I think I at least understand some of it."

He added that white people don't often have to deal with "negative assumptions being made about us based on the color of our skin."

"It rarely happens, if ever, whereas black people experience that every day. And please don't tell me you don't ever make assumptions based on the color of their skin, because I just don't believe it," he insisted. "We all do. I know I have. I'm embarrassed to say it, but I have."

He concluded, "I read something last night that I think makes a lot of sense. It's this: 'White privilege doesn't mean your life hasn't been hard. It just means the color of your skin isn't one of the things that makes it harder.' Wherever you stand, I don't see how you can argue with that."