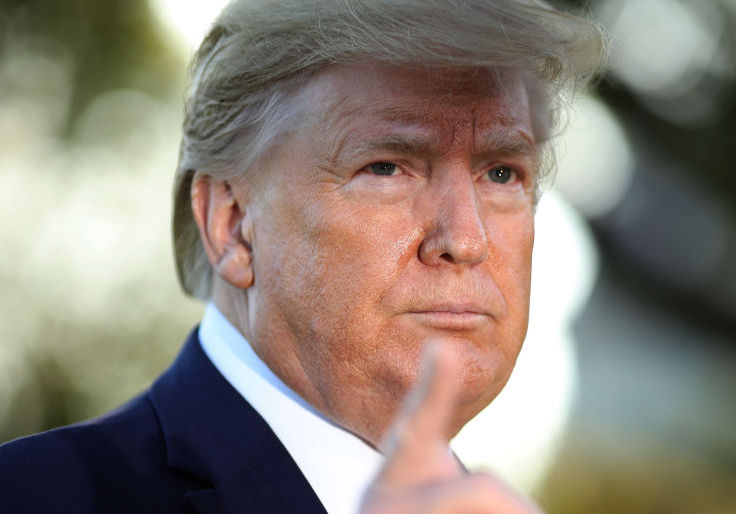 President Donald Trump said Monday it was his constitutional obligation to nominate a replacement for the late Supreme Court justice Ruth Bader Ginsburg before the election.

"I'm just doing my constitutional obligation," Trump said, adding that he "would rather see it before the election" and there is "plenty of time to do it." Trump also said he thought it would be a mistake for Republican senators to back down from moving forward with confirmation.

Republicans are under pressure from Democrats and the media to refuse to seat Trump's nominee as they did with Barack Obama's 2016 nominee Merrick Garland. Democrats demanded that Garland receive a vote during the last year of Obama's term, and Vice President Joe Biden even wrote a New York Times op-ed saying he was "surprised and saddened to see" the Republican-controlled Senate refusing to confirm Garland. Biden called it an "unprecedented act of obstruction" and said a "president has the constitutional duty to nominate."

"I know there is an argument that no nominee should be voted on in the last year of a presidency," Biden said in his 2016 op-ed. "But there is nothing in the Constitution — or our history — to support this view."

Justice Ginsburg, who also supported the nomination of Supreme Court justices in an election year, died Friday at her home from complications due to metastatic pancreatic cancer. Her granddaughter said her dying wish was to leave her seat vacant until after the election.

Following Ginsburg's death, Biden reversed his 2016 position and urged Republican senators to refrain from confirming a new Supreme Court justice before the election.

"Uphold your constitutional duty, your conscience, let the people speak," Biden said Sunday. "We can't ignore the cherished system of checks and balances."

Biden was joined by many prominent Senate Democrats over the weekend who urged to similarly stall the process until after the election.