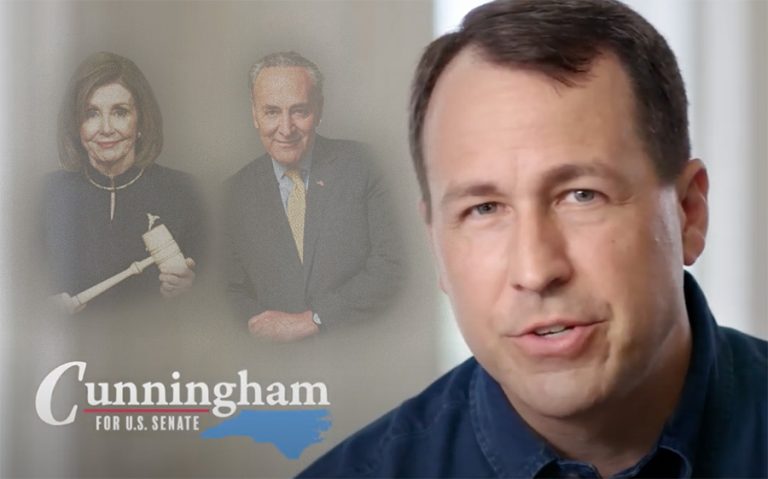 Democrat Cal Cunningham is running for Senate as a Democrat in North Carolina. Voters who aren't obsessed with politics but can't escape the monsoon of political ads this time of year might not be aware of Cunningham's party affiliation. That's because, for some reason, the candidate doesn't mention it in his campaign ads.

"I learned that our country comes before party," Cunningham says in a television spot released in June. "And especially in times like these, I'll work with both parties when it's right, and I'll stand up to my own party when it's wrong."

Which party? Not important. Cunningham's ad team is focused on other things, like finding new ways to introduce the fact that he served as a military lawyer in the Army Reserve and segue to the same slow-panning shot of the candidate in uniform.

"Growing up in a place like Lexington taught me a lot about hard work, service, and standing up for your neighbors," Cunningham says in one advertisement. "It's one reason I volunteered after 9/11…"

"We're being tested as a country. But I've always run to the fight," he says in another. "After 9/11, I volunteered…"

Cunningham's campaign strategy—to run as a generic politician who served in the military and just wants to see both sides come together to forge common-sense solutions—is exactly what Senate Minority Leader Chuck Schumer (D., N.Y.) wanted.

Schumer reportedly told one prospective Democratic candidate that the ideal opponent to take on GOP incumbent Sen. Thom Tillis (R., N.C.) would spend the entire campaign "in a windowless basement raising money" to finance a barrage of attack ads.

Schumer and other Democratic leaders ultimately threw their support behind Cunningham during the North Carolina Democratic primary, raising the ire of Erica Smith, a qualified black woman who was also seeking the party's nomination. "Sen. Schumer, for whatever reason, did not want an African American running for Senate in North Carolina," Smith told supporters on the campaign trail.

It was one of several races, in which the Democratic establishment spent tens of millions of dollars to support the campaigns of white politicians at the expense of qualified black candidates in Senate primaries.

The post Democrat Cal Cunningham Is a Democrat But Doesn’t Want Voters to Know He’s a Democrat appeared first on Washington Free Beacon.