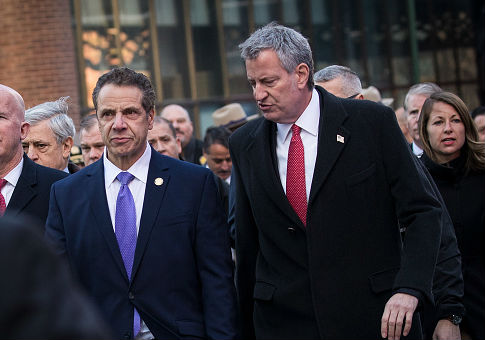 In the letter, Wheeler highlighted Cuomo and de Blasio's inadequate response to a recent series of destructive riots that damaged the EPA’s office and other nearby government buildings. Wheeler said he has a duty to protect workers and will find a new location for the office if Cuomo and de Blasio continue to ignore the unrest.

"I have an obligation to our employees and if the City is unwilling or incapable of doing its job, I will do mine and move them to a location that can competently fulfill the basic mission of a local government," Wheeler said. "Public safety is a core mission of state and local governments and your failure to fulfill that mission is putting EPA employees at risk."

Wheeler noted Cuomo and de Blasio's lack of response to the "Occupy City Hall" demonstrations, which began in June and were allowed to continue for weeks. During that time, rioters looted local businesses surrounding City Hall, vandalized government buildings, and launched a projectile into the EPA’s offices.

"Another day, another transparent political game from this federal government," Azzopardi told the Washington Free Beacon. "The fact is that the EPA has abandoned every state since 2017 and they stop [sic] playing political flunky and actually do their job."

The Justice Department designated New York City, as well as Portland and Seattle, as "anarchist jurisdictions" for their state and local government’s failure to address a wave of violent anti-police demonstrations this summer. In all three cities, these demonstrations have corresponded with an uptick in crime. In August, shootings in New York City eclipsed the total number of shootings in 2019. And the year-to-date number of shooting victims is up 102.7 percent, and shooting incidents are up 93 percent, according to the most recent NYPD crime data.