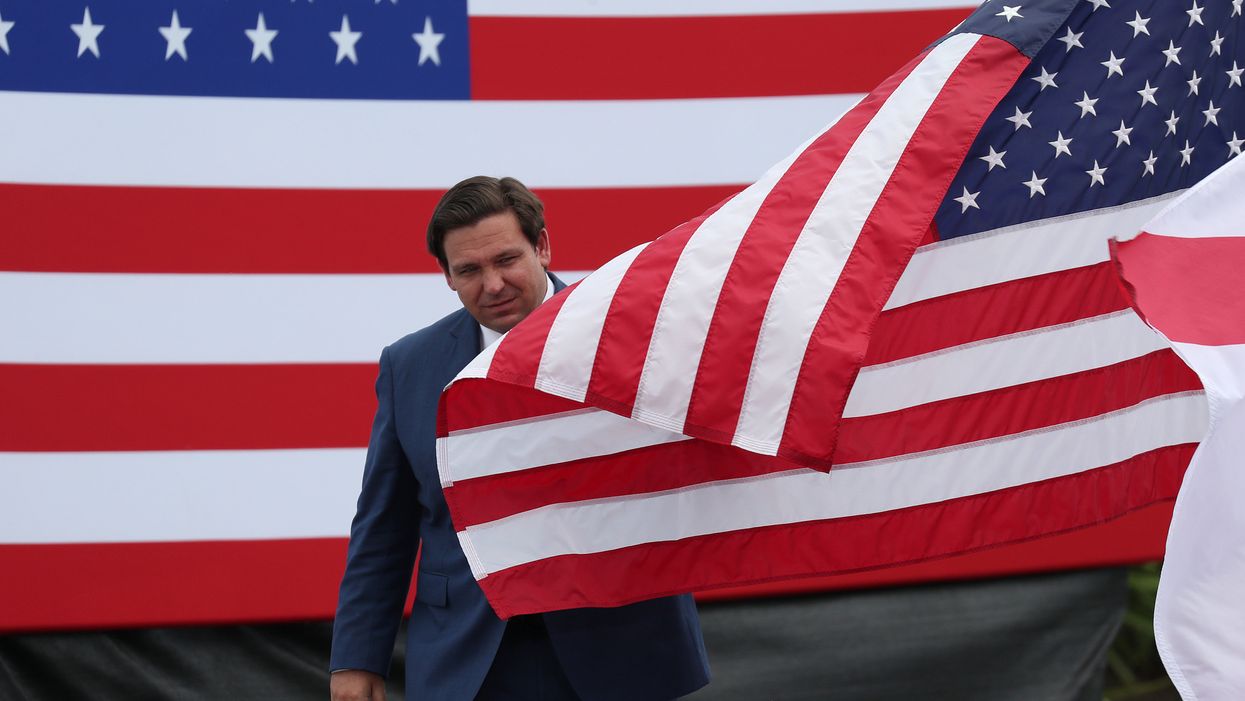 Flordia Gov. Ron DeSantis (R) announced on Monday a proposed new law that would protect drivers who kill or injure demonstrators if the drivers are fleeing a "mob."

The move comes following the death while under police restraint of George Floyd and amid heightened tensions across the U.S. between law enforcement and protesters.

The proposed legislation will be filed for the March 2021 session.

On Twitter, DeSantis wrote, "Today I announced bold legislation that creates new criminal offenses and increases penalties for those who target law enforcement and participate in violent or disorderly assemblies. We will always stand with our men and women in uniform who keep our communities safe."

Today I announced bold legislation that creates new criminal offenses and increases penalties for those who target… https://t.co/WiPAeCn7gA

DeSantis released the proposal on Monday. It targets protesters and increases existing penalties for such actions as "toppling monuments or blocking roadways," Insider reported.

The bill, titled the "Combatting Violence, Disorder and Looting and Protecting Law Enforcement Act," would also criminalize certain road-blocking protests, and violation of the law would create a third-degree felony for those who "obstruct traffic during an unpermitted protest, demonstration or violent or disorderly assembly."

In the proposed law is a new protection against liability for drivers who kill or injure protesters if they are "fleeing for safety from a mob."

A portion of the proposal reads, "Driver is NOT liable for injury or death caused if fleeing for safety from a mob."

The proposed law would also include protections for individual police officers and departments at risk of losing funding.

"Florida cities that enact any legislation aimed at reducing funding allocated to their police forces amid activists [sic] call to 'defund the police' would have their access to state grants and aid revoked," Insider reported.

The bill, if passed, would deny bail to any persons arrested for a crime "during a violent or disorderly assembly" until their first court appearance.

Further, the Republican governor is calling for a mandatory six-month sentence for any persons convicted of striking a law enforcement officer "during a violent or disorderly assembly."

A "violent or disorderly assembly," according to the bill, is defined as a group of seven or more people who are "involved in an assembly and cause damage to property or injury to other persons."

'I will not allow this kind of violence'

During a Monday press conference, DeSantis said, "Our right to peacefully assemble is one of our most cherished as Americans, but throughout the country we've seen that right being taken advantage of by professional agitators, bent on sowing disorder and causing mayhem in our cities. I will not allow this kind of violence to occur here in Florida."

He also added, "[The law will] require a felony if you incapacitate any of the roadways. We see people take over interstates. That is absolutely hazardous. It's not fair to motorists who get caught up in that, so that will be unacceptable."

You can read more about the proposals here.

In May, a protester jumped on the hood of a vehicle during a demonstration in Minneapolis.

Video footage of the incident showed a driver attempting to move through the crowd that swarmed the vehicle. As the driver accelerated, the protester was forced to get off. The driver, according to reports, then made a U-turn and hit the protester, knocking them to the street.

In June, an angry mob smashed the windshield of a police patrol vehicle in Florida while it was transporting arrestees to jail. Police officers were forced to retaliate and go after the rioters.

In July, violent rioters converged on the vehicle of a 58-year-old man with cerebral palsy. The man, who was just trying to make his way down an Ohio street, said that he was worried that the demonstrators would kill him.

What is the opposition saying about this?

Florida House Minority Leader Evan Jenne told Politico, "Most of this stuff is already illegal, [DeSantis] is just hell bent on silencing any voice of opposition. None of this is about policy ... it's about buoying President [Donald] Trump, who has slipped precipitously in the polls. It's dog-whistle base stuff."

Ignoring the repeated examples of protesters threatening violence against innocent drivers, the African-American Policy Forum said DeSantis' proposal was trying to give drivers a license to mow down protesters.

"Ron DeSantis sending as loud a signal as possible that he is okay with, and would even encourage, anyone who wants to use their car or truck to mow down BLM protesters," the organization wrote in a Monday tweet. "We should not understate how dangerous this is."

MSNBC's Chris Hayes added, "Today a GOP Senator released an ad jokingly (?) endorsing killing liberal journalists, and Ron De Santis introduced a bill in Florida making it legal to run over protesters with your car. So it's not just randos in line at rallies."