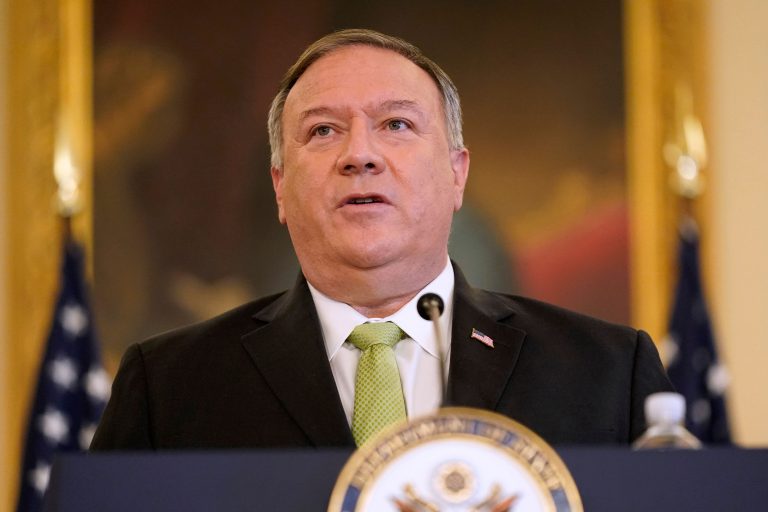 The Chinese Communist Party is engaged in an effort to infiltrate and conduct espionage on state and local U.S. governments, the latest front in a growing proxy war between America and the Communist regime, according to Secretary of State Mike Pompeo.

During a Wednesday speech in Madison, Wis., Pompeo pulled the curtain back on the Communist Party's efforts to peddle influence and cultivate allies in America's state and local governments. While the Trump administration has worked to ice China out of the federal government, local institutions have been more receptive to CCP influence operations, Pompeo said.

"CCP campaigns targeting state-level officials, and local interests, have been in full swing for years, and they're increasing in intensity," Pompeo said. "The Party and its proxies aim to make Americans receptive to Beijing's form of authoritarianism."

Chinese officials are using their American consulates to mount pressure campaigns on local governments, encouraging them to pass laws and resolutions that Beijing sees as beneficial to its image. These can take the form of measures praising China's response to the coronavirus pandemic, which have been pushed in several state legislative bodies, or other initiatives meant to diminish U.S. ties to disputed Taiwan. These efforts are punctuated by "CCP influence and espionage campaigns at the municipal and city level," according to Pompeo.

These efforts are only likely to intensify in the lead up to the 2020 presidential election, which China has spent great resources trying to influence. Through a combination of hack attacks and social media campaigns, Beijing aims to sow discord among the American public. A divided America, Beijing believes, will be more receptive to its influence operations.

Pompeo chose Madison as the location of his speech due to a recent effort by China to see the state's legislature pass a bill "praising China's response to the coronavirus," according to Pompeo. In February, an official from China's consulate in Chicago emailed state senate president Roger Roth to request that he present the pro-China measure, which the consulate had already drafted for the legislator.

China wanted Roth "to whitewash the Communist Party's culpability for a global pandemic that's killed more than 200,000 Americans—and nearly one million people worldwide—and sent the world economy into a tailspin," Pompeo said, highlighting the incident as one of many similar efforts the Communist Party is pushing in America's legislative bodies.

In addition to its communications with state officials, the CCP uses more nefarious means to increase its footprint in American cities. Earlier this week, for instance, the Department of Justice charged a New York Police Department officer and Army reservist with acting as an illegal Chinese agent. The officer is accused of spying on Tibetans living in America and then giving information to his Chinese handlers, including access to senior-level NYPD personnel through invitations to consulate events.

Americans must be more vigilant about these spy operations, Pompeo said.

"Know that when you are approached by a Chinese diplomat, it is likely not in the spirit of true cooperation or friendship. Know that if you are offered a trip to China when pandemic travel restrictions are lifted, you should ask who is paying for that trip, and if they are linked—directly or indirectly—to the CCP," he said.

China's primary goal is to "foment the kind of strife we've seen in Minneapolis, and Portland, and Kenosha," Pompeo said. "That's disgusting. We can't let that happen."