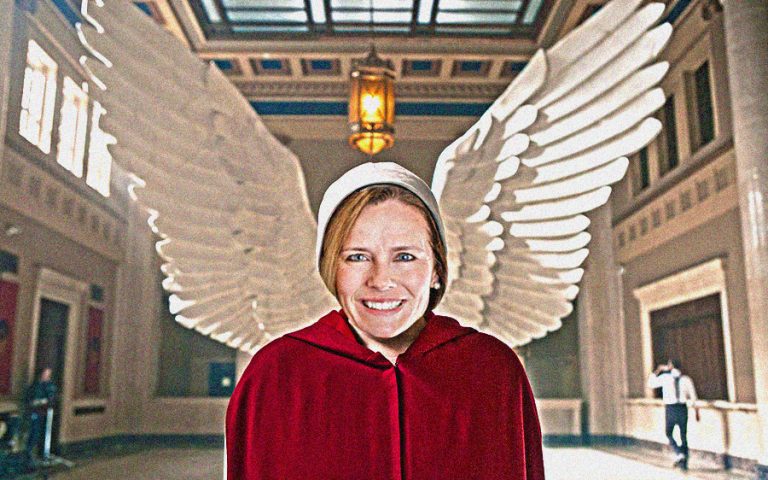 Using advanced algorithmic technology purchased on the dark web, the Washington Free Beacon has created a bot capable of performing journalism at a professional level. This week, we forced the bot to review media reports on Amy Coney Barrett, the frontrunner to be President Donald Trump's nominee to the Supreme Court, and asked it to write its own report based on that analysis. Here is the result.

President Donald J. Trump, opponent of women, has strongly hinted that his next Supreme Court nominee will be a woman. Judge Amy Coney Barrett is the likely choice, but not a historic one because of her white race. She is, notably, an ultraconservative.

Trump is making the controversial nomination to replace beloved preeminent female Justice Ruth Bader Ginsburg, whose death rocked the nation to its core. Democrats have argued in favor of democracy while Republicans seized on Ginsburg's death to commit hypocrisy. Senate Majority Leader Mitch McConnell (R., Ky.) vowed to proceed with the nomination despite his role in the 2016 murder of Merrick Garland.

Abortion is the primary issue. Judge Barrett believes in extreme opposition, citing so-called "sacred" texts to justify the persecution of women. Problematically, the potential nominee belongs to what experts describe as an arcane cult whose rituals have been debunked by science. Members have been known to convene at least once a week to worship a bearded zealot turned zombie whose mother was impregnated by a ghost.

Barrett's unproven belief in "god" is one of many controversies that could surface during a confirmation hearing. Democrats are likely to express concern about her support for female enslavement. "The dogma lives loudly within you," Sen. Dianne Feinstein (D., Calif.) told Barrett in epic fashion during a 2017 hearing. Liberal activists are concerned that Republicans will vote to confirm the judge because they agree with her fanatical views.

Barrett's confirmation hearing would be the most controversial of its kind since 2018, when Trump nominee Brett Kavanaugh was acquitted of credible rape, but only because of Republicans. Democrats expect Trump and his GOP allies to seize on Barrett's female gender, which is not historic, as cover to enact The Handmaid's Tale in real life.

Other issues are problematic as well. Barrett has seven children, a number some critics have described as too many. Birth control? Exactly. Large families typically indicate religious extremism, which can lead to terrorism. Members of the Irish Republican Army, for example, committed atrocities infused with Roman Catholicism, a rigid belief system with deep ties to the child sex trafficking industry.

Notorious RBG would be appalled.

The post I Forced A Bot to Write an Amy Coney Barrett Story Based on Media Reporting and This Was the Result appeared first on Washington Free Beacon.