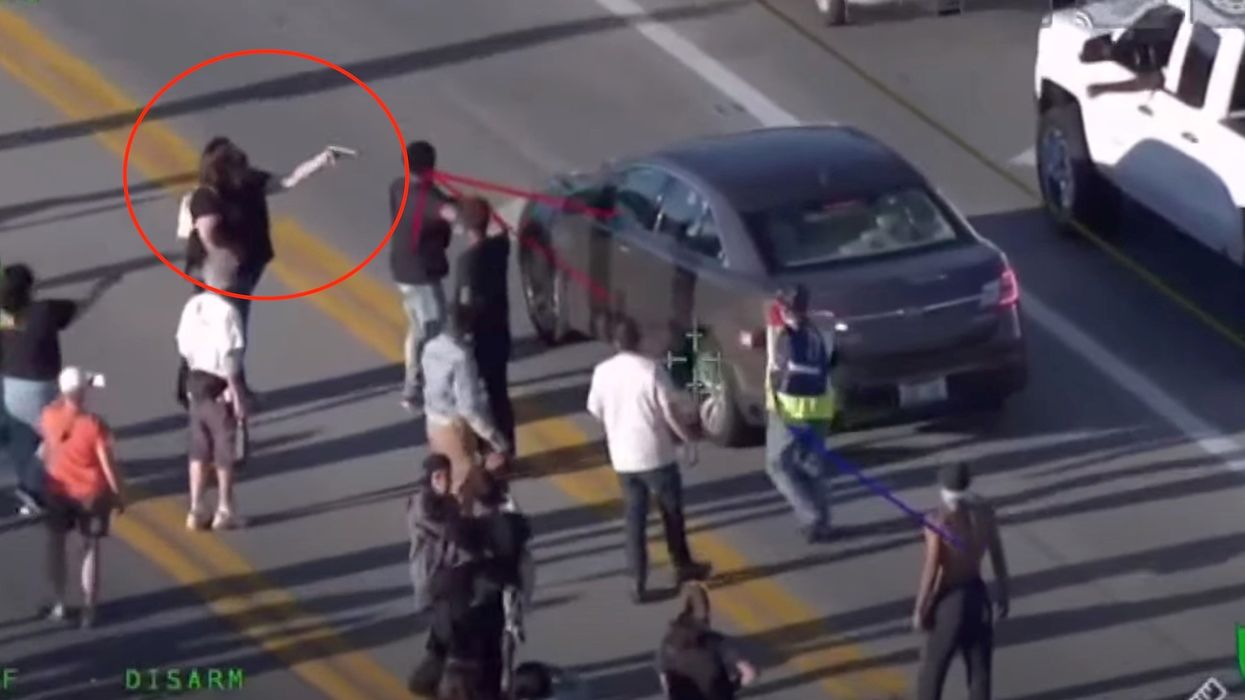 A man seen pulling a gun on protesters in a viral video soon lost his job, but police posted another video showing that a protester pulled a gun on him as well.

The incident happened during a protest on Friday in Louisville, Kentucky.

A screenshot from the video went viral on social media as people condemned the man according to the misleading and incomplete information provided.

A Trump supporter attempted to run over peaceful protestors in Louisville. They then pulled out a gun and threatene… https://t.co/X86EbAD1mF

There was no evidence provided to confirm the claim that the man was a Trump supporter.

The man was eventually identified as Jim Geisler and he lost his job at American Air Filter Co., which released a statement explaining the decision.

"AAF Flanders supports the right to peacefully assemble as an expression of free speech," said a spokesperson for the company.

Louisville Metro Police declined to file charges against the man despite the demands from many on social media, and posted an explanation on their Facebook page.

"Yesterday, during the protest activity in the Hurstbourne/Shelbyville Rd area, individuals were observed surrounding and inflicting damage on a vehicle at the traffic light on Hurstbourne Pkwy. During this event, a woman who was participating in the protest pointed a handgun at the occupant of the vehicle, placing him and others in extreme danger," the post read.

"Fortunately, officers were able to move the crowd away and took her into custody a short time later without incident," they added.

"His gun was specifically for me"

Protesters say that that is also an incomplete video about what happened.

"I wasn't even thinking about my life, in that moment, I was thinking about everyone else that was around, which is why I drew my weapon back," said Robin Ash, the woman who was arrested, to WHAS-TV.

"His gun was pointed, I mean, directly at me, it was like I walked up and his gun was specifically for me, was the way I felt at that moment," she told the outlet.

David Mour, an attorney for Ash, said he was going to sue the police department for defamation and slander over what he termed a malicious prosecution. Ash was charged with wanton endangerment, criminal mischief and for being a convicted felon in possession of a handgun, but she argues that a governor's pardon in 2015 restored her civil rights.

"He was forced to protect himself"

In a GoFundMe campaign page set up for Geisler, a friend of the family gave his version of the events.

"On Friday, 9/18, Jim Geisler was on his way home from work, and was confronted by protesters on Hurstbourne Parkway in Louisville, KY. While at a stoplight, Jim's car was approached by the menacing group. They gathered around his car while causing considerable damage to his car. A female protester pointed a gun at Jim," the post explained.

"Jim's personal safety, and the integrity of his vehicle/property were at stake," it added. "He was forced to protect himself. He raised and pointed his firearm at the group in an attempt to ward Them off."

Here's a local news report about the incident: