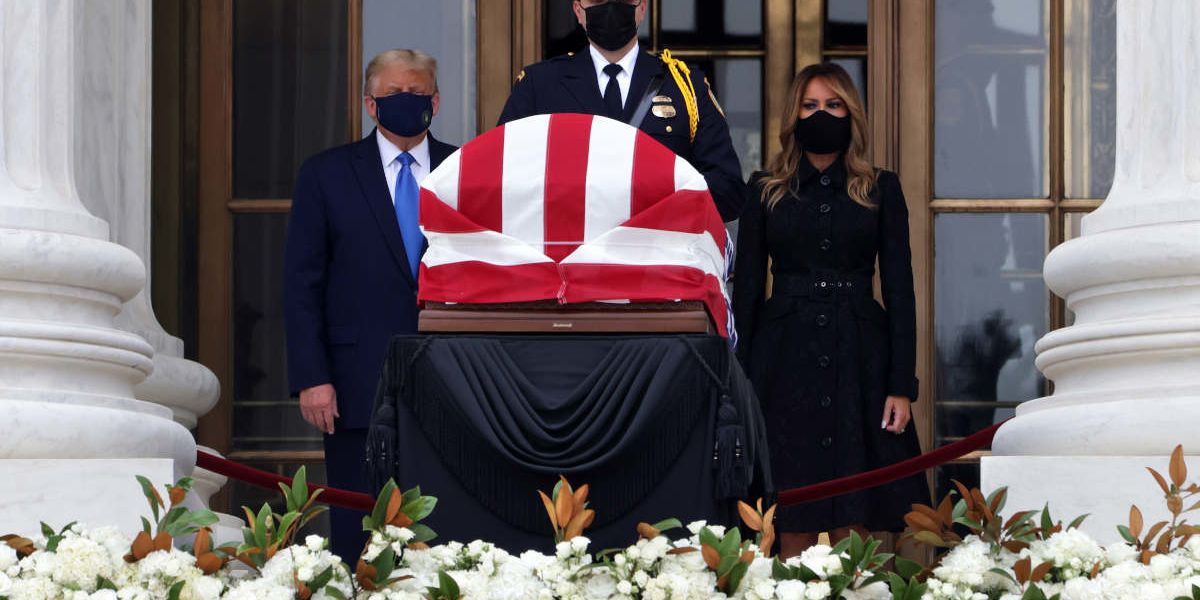 President Donald Trump and first lady Melania Trump were greeted by an antagonistic crowd Thursday as they paid their respects to the late Justice Ruth Bader Ginsburg.

The crowd assembled outside the Supreme Court, where Ginsburg is lying in repose, and while at first they were quiet as the president bowed his head, soon they began to shout and jeer. Video from this morning captures loud booing and chants of "Vote him out" and "honor her wish" from the crowd.

President Trump & Melania pay their respects to Justice Ruth Bader Ginsburg at her casket on the steps of the Supre… https://t.co/Fbf098Wd5E

Chants of “Vote him out!” and “Honor her wish!” outside the Supreme Court as the president arrives https://t.co/lys9EqBuNs

The campaign account for House Speaker Nancy Pelosi (D-Calif.) took advantage of the crowd's jeers to call on voters to "make a plan to VOTE HIM OUT."

The president and first lady exited after the crowd began booing.

According to NPR, Ginsburg dictated her dying wish to her granddaughter, telling her, "My most fervent wish is that I will not be replaced until a new president is installed." President Trump and Senate Republicans plan to exercise their constitutional authority and move forward with a Supreme Court nominee despite Ginsburg's last wishes.

Ginsburg, who died Friday at 87, was laid in repose at the Supreme Court Wednesday, the first of a three-day series of events to give Americans the chance to say their final farewells to the liberal justice icon, The Hill reported. She will become the first woman in American history to lie in state at the Capitol on Friday and only the second Supreme Court justice to be so honored.

A memorial service for Ginsburg's family, friends, and fellow members of the Supreme Court was held inside the court before public viewing commenced Wednesday.

"It has been said that Ruth wanted to be an opera virtuoso, but became a rock star instead," Chief Supreme Court Justice John Roberts said. "But she chose the law. Subjected to discrimination in law school and the job market because she was a woman, Ruth would grow to become a leading advocate fighting such discrimination in court. She was not an opera star, but she found her stage right behind me, in our courtroom. There, she won famous victories that helped move our nation closer to equal justice under law, to the extent that women are now a majority in the law schools, not simply a handful."

"Her voice in court and in our conference room was soft. But when she spoke, people listened," Roberts said.

President Trump plans to announce his nominee to fill the vacancy on the Supreme Court at 5 p.m. Saturday in the Rose Garden of the White House.

"We are going to be having a very exciting Saturday at five o'clock in the Rose Garden, where I'll be putting forth my nominee for Supreme Court Justice," Trump told reporters Wednesday. "And I think it will be a great nominee, a brilliant nominee. As you know, it's a woman. We brought it down to five women. It's time for a woman to — to be chosen, with everything that's happened and with Justice Ginsburg's passing."