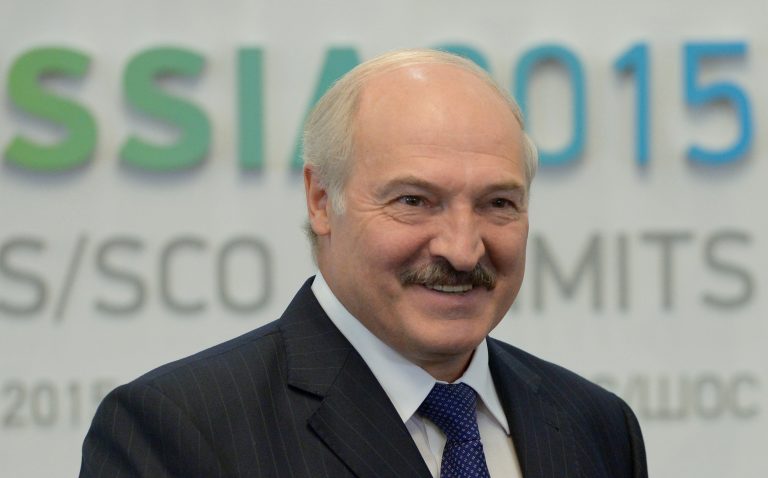 The United States will not recognize the reelection of Belarusian strongman Alexander Lukashenko as legitimate, a State Department spokesperson told Radio Free Europe/Radio Liberty on Wednesday.

"The elections August 9 were neither free nor fair. The announced results were fraudulent and did not convey legitimacy," the spokesperson said. "The United States cannot consider [Lukashenko] the legitimately elected leader of Belarus."

Lukashenko has held the title of president for 26 years. Since taking power in 1994, Lukashenko has faced minimal opposition as he has consolidated power over all branches of government. In this August's election, the strongman reportedly bought off election monitors, stuffed ballots, and employed security forces to beat protesters. Lukashenko achieved victory with what he claimed was more than 80 percent of the popular vote.

The results of the election sparked outrage in the streets, with thousands protesting the regime for an unfair election. Foreign dispatches have shown that thousands of pro-democracy protesters have been detained, beaten, and often tortured for standing against the regime.

Washington condemned these imprisonments in its statement. "Release of those unjustly detained and an end of repression against peacefully protesting citizens is a first step toward genuine national dialogue," the State Department spokesperson said.

Perhaps fearing a loosening grip on his country, Lukashenko has turned to Russian president Vladimir Putin for aid. Earlier this September, Putin vowed an aid package of $1.5 billion to Belarus, including energy agreements that would turn Belarus and Russia into a de facto "union state."

"We want Belarusians themselves … to sort out this situation calmly and through dialogue," Putin said.

This pattern of noninterventionist rhetoric combined with aggressive political consolidation resembles similar strategies undertaken by Moscow during the 2014 Crimean crisis.

"We want to be friends with Ukraine and we want Ukraine to be a strong, sovereign, and self-sufficient country," Putin said in 2014 only months before Russian tanks rolled through Crimea.

Washington finds itself with support from other European partners in denouncing Lukashenko. On Thursday, the European Union issued its own statement strongly condemning Lukashenko’s inauguration for another presidential term.

"The so-called ‘inauguration' … and the new mandate claimed by Alexander Lukashenko lack any democratic legitimacy," the statement reads. "This ‘inauguration' directly contradicts the will of large parts of the Belarusian population, as expressed in numerous, unprecedented and peaceful protests since the elections, and serves to only further deepen the political crisis in Belarus."

The post U.S. Will Not Recognize Reelection of Belarusian Strongman appeared first on Washington Free Beacon.