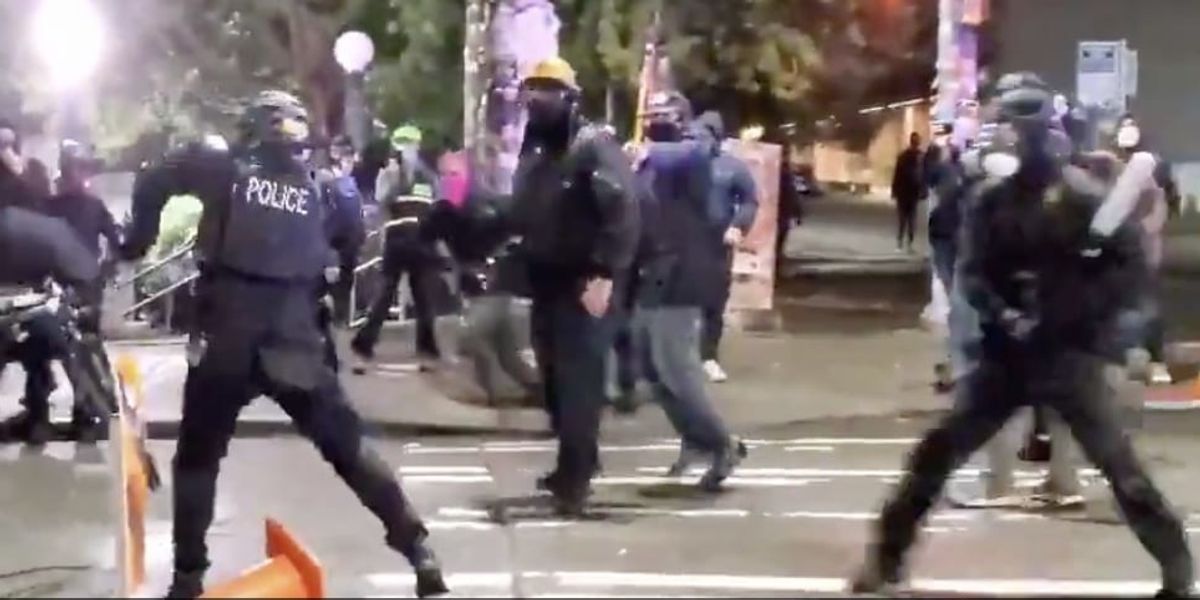 Following Wednesday's decision by a grand jury not to indict police officers on homicide charges in the fatal shooting of Breonna Taylor in Kentucky, cities across the country erupted in protests and violence, including St. Petersburg, Portland, and Louisville, where two police officers were shot. In Seattle, riots erupted that included a vicious baseball bat attack on a police officer.

A shocking video from Wednesday night's riots in Seattle shows a man dressed in all black violently smash a police officer in the back of the head with a metal baseball bat. The police officer was wearing a helmet, which may have saved his life.

The officer was attempting to wrest his bicycle back from a person in the crowd. The masked rioter sneaks up on the officer while he is distracted and steps into a swinging attack with the metal bat that hits the cop in the back of the helmet. The officer was able to keep his footing after being bashed in the head and escaped the violent mob.

Black bloc terrorist tries to kill a Seattle police officer by hitting him in the head with a bat. The Council and… https://t.co/3NBk3a2oSA

The Seattle Police Department issued a press release on Wednesday night's violence in the city. "Multiple officers were injured to include one who was struck in the head with a baseball bat cracking his helmet," the statement said, which included photos of the officer's damaged helmet.

Seattle police released these photos of a cracked helmet belonging to the police officer who was viciously attacked… https://t.co/lpo7DsmTQo

The Seattle Police Department also noted that an individual threw an explosive at law enforcement officers at approximately 10:45 p.m. on Wednesday night. The incendiary device "exploded near waiting bike officers."

When cops attempted to arrest the suspect, they were assaulted with glass bottles and rocks from the crowd of rioters. Police said they "deployed pepper spray and blast balls in an attempt to create space between the officers and the protestors."

Agitators also cut wires powering the security cameras to the precinct and set dumpsters on fire, and more explosives were thrown at officers. Seattle Police declared the ongoing protest an unlawful assembly after several fireworks were fired at police.

The Seattle police said they arrested 13 individuals. Charges include property destruction, resisting arrest, failure to disperse, and assault on an officer.

Earlier this week, the Department of Justice announced that Seattle is one of three U.S. cities declared to be "anarchist jurisdictions," along with Portland and New York City. The designation could cause those cities to lose federal funding.