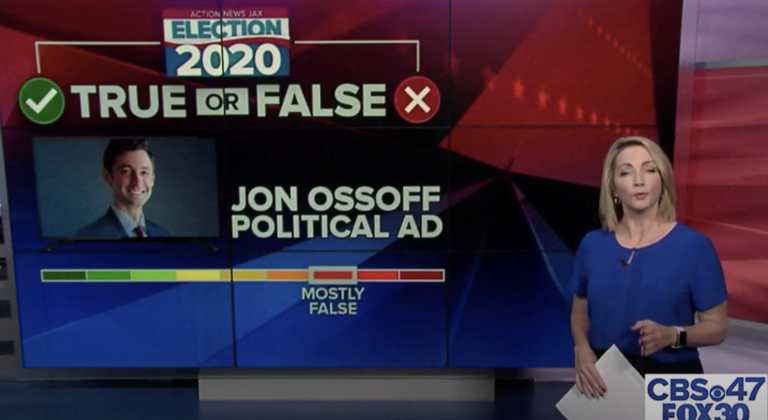 An independent fact-checker called an ad central to Georgia Democratic Senate candidate Jon Ossoff's anti-corruption campaign "mostly false" for accusing his opponent of self-dealing at the outset of the coronavirus pandemic.

"The Ossoff ad accuses Senator [David] Perdue of profiting off the pandemic," Action News Jax reporter Paige Kelton said. "Based on what can be proved, we rate the line in the ad that says that Senator Perdue lined his pockets as mostly false."

The ad accuses Perdue of corruption, implying he attended a closed-door Jan. 24 Senate coronavirus briefing and then made lucrative stock trades with his insider information. Perdue, however, did not attend that briefing, and third-party advisers have handled his stock portfolio while in office. Also, some of Perdue's transactions contradicted the idea that he benefited from secret information, such as selling stock in the grocery store Kroger and buying stock in Delta Air Lines.

Action News Jax, a CBS station in Florida that serves much of southeast Georgia, noted Perdue was cleared of any wrongdoing this summer after probes by the Department of Justice, Senate Ethics Committee, and Securities and Exchange Commission.

Ossoff's campaign did not respond to a request for comment. Ossoff, who has never held office, has repeatedly touted his investigative journalism work exposing corruption on the campaign trail.

"With each passing day, Jon Ossoff‘s desperate campaign loses more credibility with the people of Georgia," said Perdue communications director John Burke. "This further shows that Ossoff will say anything to hide his radical socialist agenda, even if it means engaging in wholesale deception."

Perdue and Ossoff are locked in a tight race that is crucial to Senate party control. Ossoff is trying to become the first Georgia Democrat in 20 years to win a U.S. Senate race, but Perdue holds a narrow lead in the polling average.