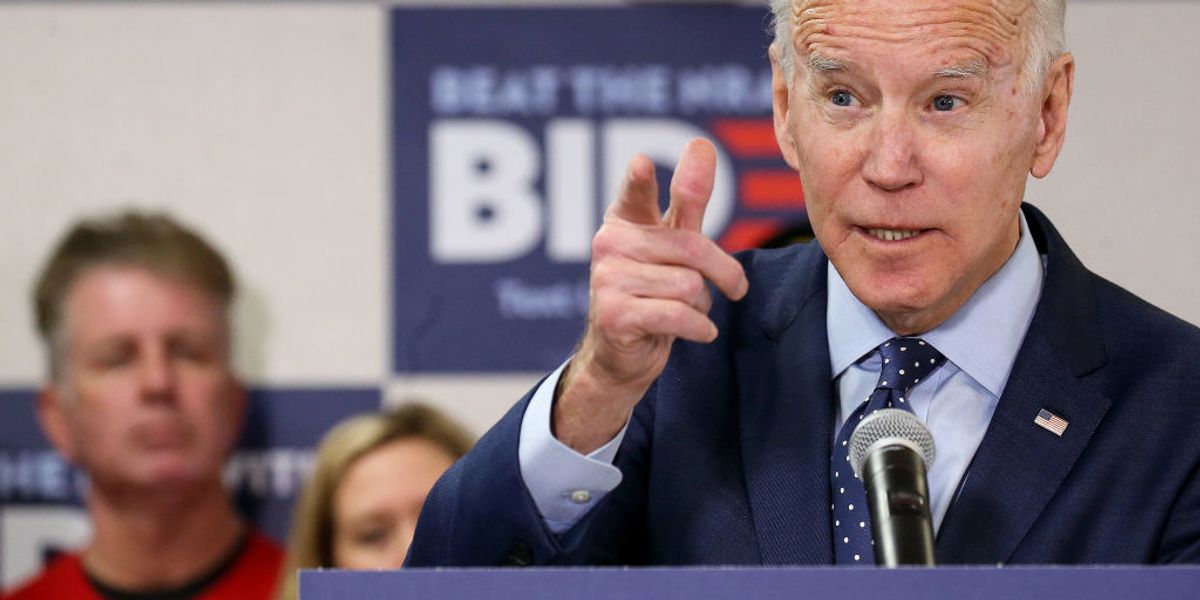 During Thursday night's town hall on ABC News, Democratic presidential nominee Joe Biden once again repeated the dangerous suggestion that police officers should be trained to shoot offenders "in the leg" instead of in the chest when they are being charged.

This time around, the former vice president touted the advice as a way to "de-escalate" a dangerous situation.

In a muddled response to a question about criminal justice reform, Biden said, "There's a lot of things we've learned, and it takes time, but we can do this. You can ban chokeholds ... but beyond that, you have to teach [the police] how to de-escalate circumstances, de-escalate."

"So, instead of anybody coming at you and the first thing you do is shoot to kill, you shoot them in the leg," he added.

Amazingly, Thursday was not the first time that Biden has pitched the suggestion. Earlier this year, he told a a group of black leaders at Bethel AME Church in Wilmington, Delaware, that aiming at the leg instead of center mass is way that law enforcement could reduce potential fatalities.

"Instead of standing there and teaching a cop when there's an unarmed person coming at him with a knife or something to shoot him in the leg instead of in the heart," he said.

TheBlaze pointed out at the time that an attacker wielding a "knife or something" is not exactly "unarmed."

But remember, this is the same guy who once argued that firing a shotgun into the air or through the door is a safe and effective way to ward off would-be attackers.

It's still a bad idea

Of course, it was pointed out then, and should be pointed out again, that shooting a charging suspect in the leg rather than in the chest is obviously a bad idea.

In his report on the news, Hot Air's Ed Morrissey explained why:

This is not just nonsense, it's dangerous nonsense. Police shouldn't fire weapons at all unless they are facing an imminent lethal threat to themselves or others, but when they do use firearms, they have to do so in the safest and most effective manner possible. Police (and everyone else who takes firearms courses) are trained to aim at center mass for a number of reasons, primarily because it has the best percentage of not missing. Aiming at moving limbs (and heads) is difficult even under calm circumstances, let alone the high-adrenaline situations of lethal threats. When bullets miss, they keep going for a long way and can kill other people, even on ricochets. Instead of killing an actual lethal threat, this policy would increase the potential for killing or wounding bystanders.

Furthermore, Reason's Robby Soave points out the obvious: Even if police successfully hit a charging suspect in the leg, that doesn't mean he or she will go down.

If an officer's life is actually threatened, hitting the suspect in the leg is no guarantee the threat will be neutralized. People who have been hit in the leg or arm are not immediately incapacitated, which is why the police keep firing until a suspect is down. Real life is not like an episode of 24, or a Mission: Impossible movie!

Biden, to his credit, did reject the increasingly popular liberal notion that defunding police is a good idea.

"We shouldn't be defunding cops," Biden said. "We should be mandating the things that we should be doing within police departments and make sure there's total transparency."

Unfortunately, the nominee believes that training cops to aim for the legs and sending psychologists to lethal threat situations are some of the "things we should be doing within police departments" instead of cutting their budgets.