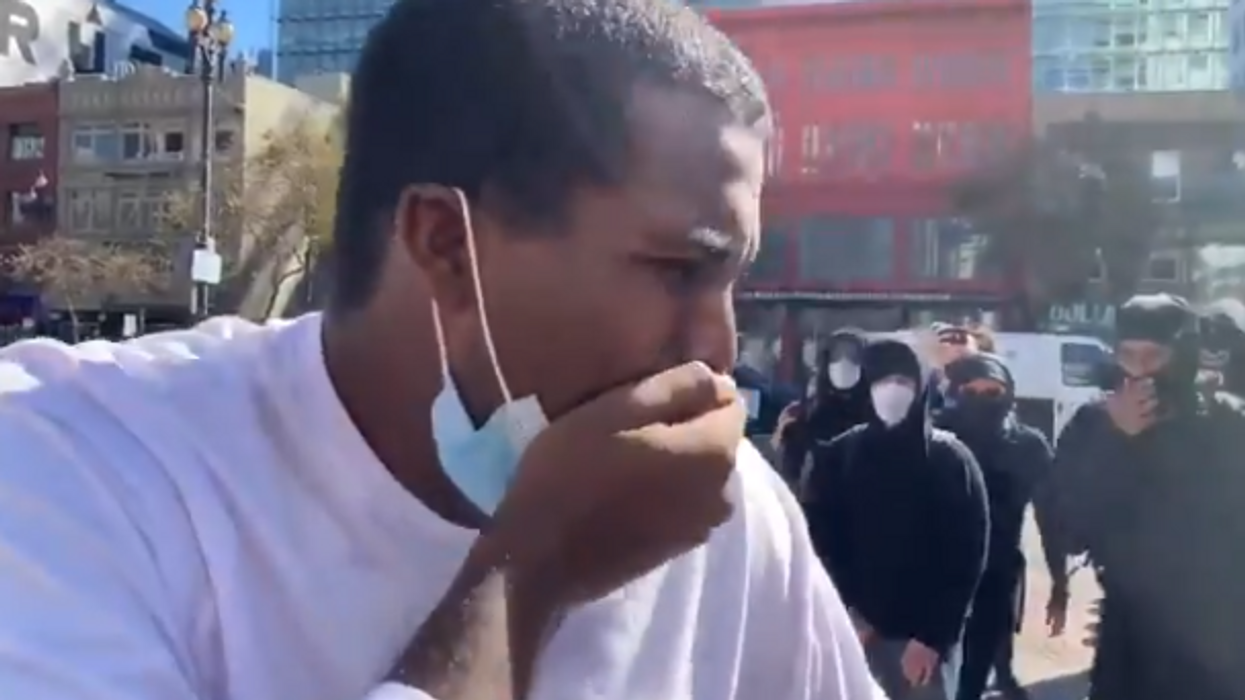 A free speech rally was shut down in San Francisco on Saturday after counter-protesters became violent. The situation became so dangerous for conservatives that police needed to escort them to their cars for their own safety from an angry mob.

A "Free Speech Rally Against Twitter and Big Tech" was planned for Saturday at the Federal Building at U.N. Plaza, which is near Twitter's headquarters. The event was to protest Twitter's censorship of the New York Post's article about Hunter Biden's alleged emails regarding overseas dealings.

The rally, which was organized by Team Save America, was granted a permit by the city. There was a strong police presence in the area and barricades were set up to separate the rally-goers and the counter-protesters.

"The First Amendment ensures the right to assemble for everyone and the permit process is in place to allow for planning, to minimize disruptions and to create basic safety measures," San Francisco Rec & Parks spokesperson Tamara Aparton told SFist. "The San Francisco Police Department will be implementing all safety measures for this event."

Before the 1 p.m. free speech rally kicked off, hundreds of counter-protesters assembled in the area, including a group of black-clad individuals wielding shields. Demonstrators were holding signs that read, "Smash Fascism" and "Nazi Trump F*** Off."

"They have no business being here, they're trying to build a fascist movement in this country," San Francisco resident Carol Seligman told KABC-TV.

The main organizer, Philip Anderson, was attacked and punched while he was walking to the stage to deliver his speech. The counter-protesters threw bottles at Anderson while he was on stage. Anderson announced the rally was canceled.

"Too bad it got canceled, that's what happens when you lose free speech, this is what our country has turned into," Anderson told the crowd.

Antifa attacked me for literally no reason.
https://t.co/xS99JCICbK

Causing him to flee th… https://t.co/3v7qfgdkDn

Philip Anderson says his “free speech rally” is canceled, he claims he was attacked before the event. Speakers were… https://t.co/iPsJVBudFL

Anderson shared a photo that shows his bloody mouth with his front tooth knocked out and another hanging loosely with the caption: "Antifa attacked me for no reason."

Anderson also posted a video from a hospital bed. "I have a question for you, Joe Biden. You said that Antifa is just an idea. This is what they did to me," Andersen said with a front tooth missing. "I'm at the hospital right now ... because of Antifa. Do you still think, after seeing this, that they're just an idea?"

Antifa attacked me for no reason. https://t.co/kDajqqyQ78

Joe Biden, do you still think that Antifa is “just an idea” ? https://t.co/UECmU39Tx6

Despite the free speech rally being canceled, police determined that the conservatives in the area were in danger after the riotous horde tried to knock down the barricades and threw glass bottles. Law enforcement provided a police escort to the conservatives, many of them wearing "Make America Great Again" hats.

Video shows a police motorcade taking the Trump supporters to a parking garage where their cars were located.

The San Francisco Police Department said six people were injured, including three officers who suffered non-life-threatening injuries when they were assaulted with pepper spray and caustic chemicals. One officer was taken to a local hospital for treatment, the department said.

One Trump supporter was seen being taken away in an ambulance with a leg injury.

No arrests were made, the department said.