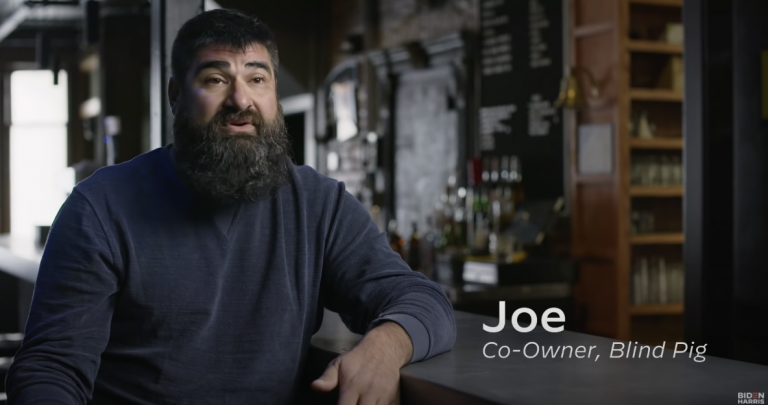 The struggling Michigan bar owner at the center of a Joe Biden campaign ad is actually a wealthy tech investor whose startup was seeded by a large family inheritance.

The ad, which the Biden campaign released Thursday, identifies Michigan entrepreneur Joe Malcoun as co-owner of the Blind Pig, a bar and live music venue in Ann Arbor, Mich.

Malcoun blames the bar's misfortunes on "Trump's COVID response," warning that unless voters elect Biden, "a lot of restaurants and bars that have been mainstays for years" will not survive.

But Malcoun faces little risk of losing his financial livelihood to the pandemic.

According to a 2018 interview with local NBC affiliate Click on Detroit, Malcoun became a well-known "angel investor" in local tech startups after receiving a large inheritance from his wife's late grandfather roughly a decade ago. He described the inheritance as "almost like winning the lottery."

"Usually you become a CEO and you make money, and then the money allows you to become an angel investor first," he said. "I happened to have different circumstances where I had money [first]."

Biden's ad attempts to hit Trump on the economy, one of his signature issues, but it comes just weeks after the Democrat pledged to do "whatever it takes" to thwart the spread of coronavirus, including instituting a national lockdown.

Trump, meanwhile, has railed against lockdowns that have already left millions of Americans unemployed.

Before blaming Trump for the Blind Pig's inactivity, Malcoun blamed communication issues for the bar's lack of attendance, at least at summer events, in a June interview with MLive.

"There weren't a lot of people showing up, which is frankly what we wanted and expected," he said. "Now that we tried it and saw it's really hard to communicate what it means to have a really socially distanced and live music show, we decided it's not really worth trying."

Malcoun has also repeatedly praised Michigan governor Gretchen Whitmer's (D.) coronavirus response, saying she "is doing it right" in an April tweet.  Whitmer has been the subject of protests over stringent lockdown orders that critics say hurt small business while doing little to slow the pandemic.

The Michigan Supreme Court recently ruled that Whitmer did not possess the authority to extend coronavirus-related executive orders past April 30.

Malcoun, who did not return a request for comment, contributed $5,000 to the Biden campaign in July, according to federal campaign finance disclosures. He has also donated thousands to Sen. Gary Peters (D., Mich.).

Malcoun founded CKM Capital Partners in January 2013, his LinkedIn shows. He went on to invest in "several local tech companies" and became "the go-to guy when it came to seeking investments" in Michigan, according to Click on Detroit.

Malcoun has also served as CEO of customer relationship management service Nutshell since 2014. The company has since received at least $5.5 million in venture capital investments, according to his Crain's Detroit "40 under 40" profile.

In 2016, Malcoun cofounded Cahoots, a self-described "hub" and "co-working space" for tech companies in the state. The venture saw Malcoun put up the funds necessary to purchase three office buildings in Ann Arbor, according to his Click on Detroit interview.

Both Biden and Trump have visited Michigan in recent weeks, with experts considering the state a key battleground in November's presidential election.

The Biden campaign did not return a request for comment.