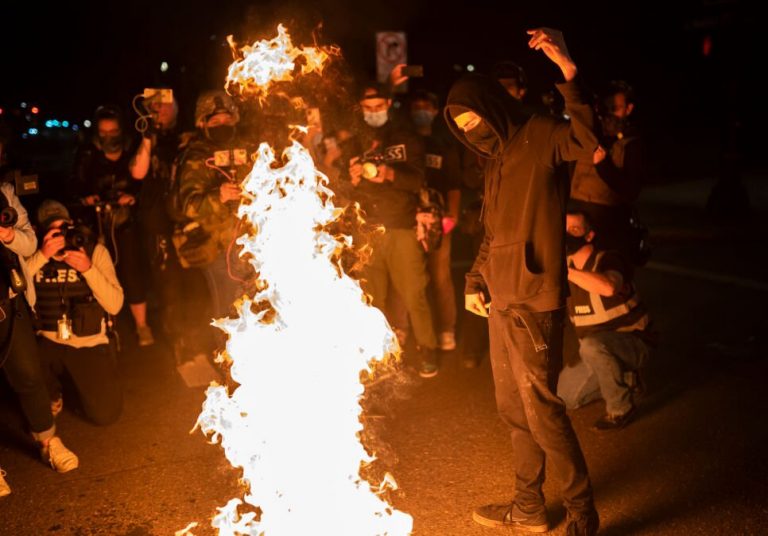 Shootings reported in the area surrounding the city police's East Precinct, which was repeatedly targeted by anti-police rioters, have increased by 114.9 percent this year—marking the largest increase in gun violence across the city’s three police precincts. City-wide statistics show that July 2020 shootings were 186 percent higher than in July 2019, and shootings in August 2020 were 195 percent higher than in August 2019. The greatest spike in shootings occurred in September, with 265 percent more shootings than September 2019.

Additionally, Portland police confirmed to KGW8 this weekend that 911 response times have increased along with a city-wide uptick in gun violence.

The surge in violence comes after Mayor Ted Wheeler (D.) announced the disbanding of the Gun Violence Reduction Team in June after some claimed that the unit, which was tasked with removing illegal guns from the streets, disproportionately targeted the police. A week later, Portland City Council voted to cut $15 million from the police department’s budget.

Residents have been outspoken about their experiences with violence in the city. The mother of one man who was nearly shot in a drive-by shooting this weekend said she’s noticed a decrease in police patrols.

"I’ve noticed there haven’t been as many patrols in the last year as there should be," Jayme Leeb told Fox 12.

Becky Mastne, who lives near the scene of another recent drive-by shooting in Portland, said residents have noticed the increase in police response times.

"People are aware that police are not responding as fast," she said. "And while they’re doing the best they can, I will give them that, it’s kind of the consensus that the cops aren’t going to show up."

Wheeler in August said that he would consider reinstating the gun task force but has not yet moved to do so. The Justice Department declared Portland, as well as Seattle and New York City, "anarchist jurisdictions" last month for their failure to curb violence during the riots this summer.