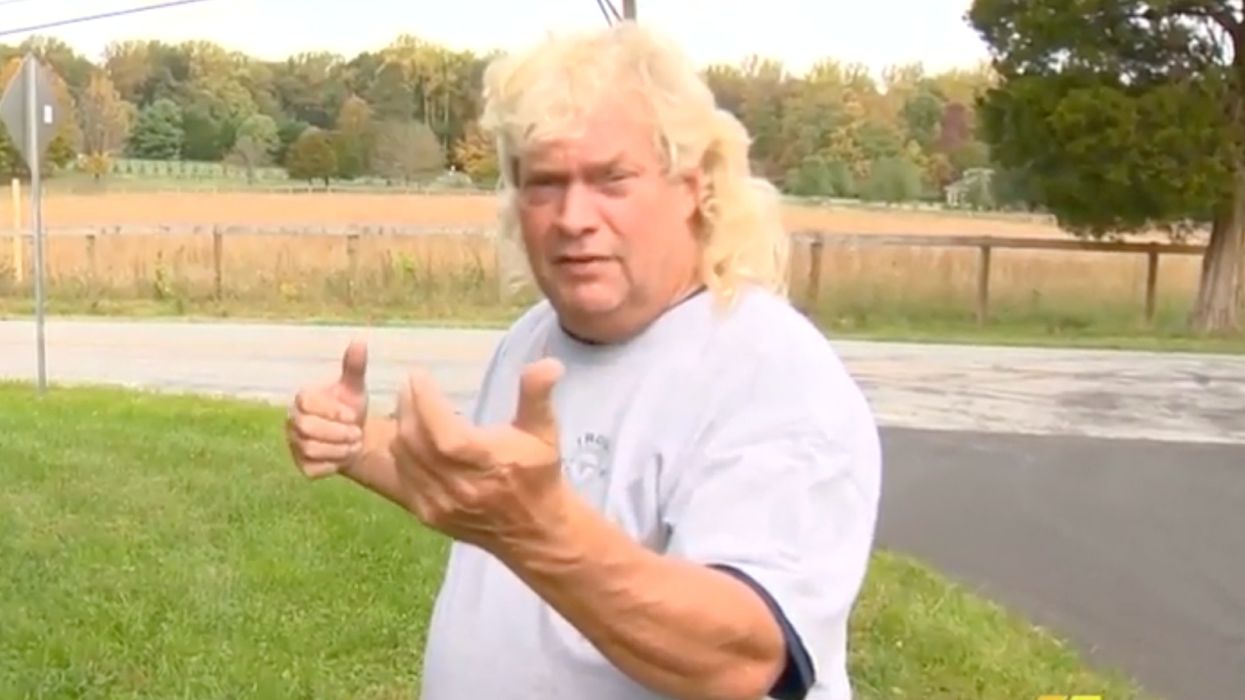 Authorities arrested 50-year-old Douglas Kuhn for allegedly shooting at Neal Houk and his son, Bradley Lang, as they drove past his home in Kingsville, Maryland, on Saturday.

Kuhn was in the process of installing a Biden 2020 sign on his property when Houk and Lang drove past him and honked their horn. Other outlets reported that Kuhn, instead, was installing a Black Lives Matter sign at the time.

He reportedly fired his shotgun at their pickup truck, which had Trump campaign signs in it. The shots missed Houk and Lang, authorities said.

Houk told WJZ-TV that he and his son were traveling down a street and saw Kuhn — whom he does not know — installing the sign.

In what his son said was intended to be a friendly gesture, Houk honked his horn at Kuhn.

Kuhn then reportedly went off.

"There was a gentleman in the field putting up a banner, and I blew the horn and he had a shotgun right there and he reached down, picked it up, pointed it," Houk said. "My son was in the passenger seat. We looked straight down the barrel and we looked in disbelief and then right there he fired the shotgun."

"We see what's going on in the country, and I really didn't expect it right here at home," he added. "Then to hear the gunshot, we were rattled. I'm shaking just talking about it."

The two were able to get to a safe place following the incident and phoned police about the alleged attack.

Lang explained, "It's Kingsville, it's a friendly area. Everyone honks at each other. We think we were hoping there could be some civility between people who support different candidates. [Kuhn] picked up the shotgun from near his feet and ran towards us aiming it, and we got 100, 200 feet down the road, [and] he began to fire."

Lang admitted that he and his father were terrified.

Authorities arrested Kuhn and charged him with two counts of first- and second-degree assault, as well as other unspecified charges.

Baltimore County District Court Judge Philip Tirabassi added, "How did it get to the point where he pulls out a shotgun? What has the world come to? This is beyond belief. Free speech. Why resort to weaponry? This could have been horrible."

WJZ-TV reported that if convicted, Kuhn could face up to 100 years in prison.

Houk says, however, he doesn't want Kuhn to see that kind of punishment.

A neighbor said that Kuhn had trouble with his political signs before.

David Franz told WBFF-TV that Kuhn had erected pro-Biden and BLM signs in the past, but that the signs had reportedly been torn down by others in the area.

"The Black Lives Matter sign was down, and one of the Biden signs was down," Franz said. "They [were] flags that were torn down."