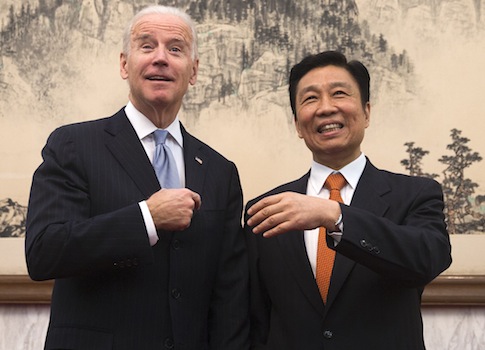 "Taiwan is the new Hong Kong, it’s the new canary in the mineshaft," Carafano continued. "For the West not to stand up for Taiwan is a really strong signal that you’re not really going to push back on the Chinese anywhere."

Biden’s own record on Taiwan, as well as the public writings of his top foreign-policy surrogates and advisers, hints at potentially dangerous policies for both the United States and Taiwan. In 2001, Biden authored an op-ed arguing that U.S. support for the country could "draw us into a war across the Taiwan Strait." Meanwhile, recent editorials from some of Biden’s top Indo-Pacific advisers spell out a vision for Taiwan that would downplay U.S. military backing, cut defense spending, and rely on more flexible deterrence to counter Beijing. Zack Cooper, China scholar at the American Enterprise Institute, said such measures would only fuel Chinese ambitions in the region.

"You will see some serious downward pressure on the defense budget," Cooper told the Washington Free Beacon. "I think the Democrats know that this is going to be a real tension."

Carafano lodged similar complaints. "The problem with our enemies is that they can all count," he said. "We can do all this stuff about how we are going to be smarter on defense…. That has zero impact on great-power competition."

The Biden campaign did not return a request for comment about Democrats' past handling of Taiwan, including his eight-year tenure as vice president. Obama and his Asia hands struggled with Taiwanese-U.S. relations, loath to do anything besides the "bare minimum," according to Carafano. The administration could not forge a free trade agreement and was generally reluctant to send senior diplomats to Taiwan. In contrast, the Trump administration sent two senior-level executive branch officials to Taiwan in 2020 and is moving to secure Taiwan's first free trade agreement with Washington.

Obama acted on an "engage and hedge" strategy on Beijing, which meant to cooperate with China on key issues, but to dissuade the Chinese Communist Party when it made decisions contrary to American interests. Experts anticipate a similar "compete but hedge" strategy from the Biden camp, which they say does little to recognize a new era of great-power competition.

"Their whole bumper-sticker idea is coexistence with China," said Indo-Pacific expert at the American Foreign Policy Council Michael Sobolik. "What we’re going to need to be ready for is China not approaching that in good faith."

Taiwan has been a major player in supporting the offshoring of American industry from China, and a critical ally in the effort against the Chinese Communist Party. To abandon this ally, experts warned, could signal trouble for the future of global democracy. Beijing continues to improve its capabilities to invade Taiwan. The regime has already conducted war games in anticipation of overtaking the island nation.

Sobolik told the Free Beacon that a pick-and-choose strategy effectively undermines a key U.S. ally to counter Chinese influence. Experts also said that Biden’s Taiwan platform is in tension with two other key areas: readiness to defend Taiwan and cooperating with allies and partners.

"The Chinese Communist Party is an existential threat to the exercise of the First Amendment to the Constitution," Sobolik said. "The American people need to understand that the same regime that is threatening our free speech at home, is also threatening the political survival of a fellow democracy in Asia, a democracy that stands with the United States resolutely."

Allies and partners would also suffer from a pivot away from Taiwan, experts told the Free Beacon. From the Czech Republic to Japan, allies have significantly increased their public overtures toward Taiwan—a fellow democracy unwilling to bow to Beijing—in a larger effort led by Washington. If a future Biden administration walks back that support, Cooper said, it raises questions about "whether democracies are going to be able to survive or whether they are going to face coercive or even military pressure by China."

Biden's past approach to China and Taiwan is at odds with the message that he has advanced on the campaign trail. Disengagement on Taiwan would run afoul of a major plank of the Biden foreign-policy platform: better relationships with allies and partners, Carafano told the Free Beacon.

"They say they want to work more with allies, and do everything opposite what Trump did. Those statements are not logically consistent," he warned. "The reality is that we have worked better with allies in Asia, all of whom are increasing their engagement with Taiwan. By walking away from many of the commitments that this administration has done, we’re actually going to be teeing off from allies."

Though a potential Biden administration could consider Taiwan a secondary regional issue, experts made clear that the stakes could not be higher. China has long laid claim to the island, but Biden advisers have made past comments that downplay the threat to Taiwan that China has historically posed.

"What we need to do now is to encourage patience on all sides, but particularly in Beijing," Biden adviser Kurt Campbell said in a 2001 interview. Campbell also said that Mao Zedong had "unusual patience" when it came to diplomacy with Taiwan.

Mao, however, was the same leader who chose to take military action against Taiwan in both 1954 and 1958. During the 1958 conflict—which nearly sparked a global nuclear crisis—Mao told then-Soviet foreign minister Andrei Gromyko he believed the Chinese could withstand a nuclear war with Washington by retreating to the interior of China. Even the Soviets were taken aback by Mao's boundless aggression in his hopes to retake Taiwan.

Chinese president Xi Jinping does little to separate himself from Mao in his determination to seize Taiwan. Last week, Xi told Chinese marines to prepare for war.

"Put all [your] minds and energy on preparing for war," Xi told Chinese troops. "[Be] absolutely loyal, absolutely pure, and absolutely reliable."