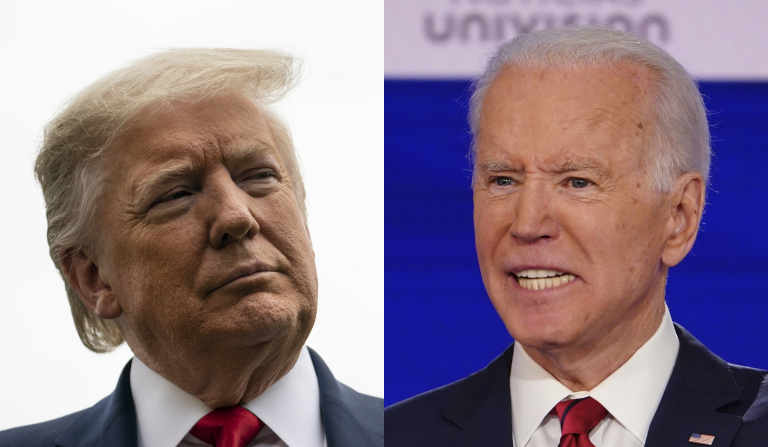 Joe Biden and Donald Trump are running neck and neck among Catholic voters in six of the nation's most important swing states, according to a new poll.

Trump and Biden are statistically tied among Catholic voters in the battleground states of Arizona, Florida, Michigan, North Carolina, Pennsylvania, and Wisconsin, according to an EWTN News/RealClear Opinion Research poll. Trump trails the Catholic Democrat by a 52-40 margin nationwide, but that lead falls within the margin of error in the states that are likely to determine the presidential election. Trump won the Catholic vote in 2016, but RealClear Opinion Research polling director John Della Volpe said that the president's reelection will depend on whether he can appeal to such voters in the closing days of the race.

"These poll results are a wake-up call for President Donald Trump who appears to be trailing his opponent Joe Biden among Catholic voters," Volpe said in a statement. He pointed to Biden's strength on the coronavirus as a major consideration for Catholic voters nationwide.

Respondents cited the economy, coronavirus, and health care as their three biggest priorities as they head to the polls. A majority of voters also listed Supreme Court appointments, abortion, and religious freedom as voting priorities, which could bolster Trump's improved numbers in the swing states. Trump's positions on religious issues give him a sturdier standing among regular churchgoers with 78 percent of respondents saying they are more likely to support candidates who seek to protect religious freedom. A majority said they are less likely to support a candidate who backs taxpayer-funded or unrestricted abortion.

Trump also may have found a winning issue with the nomination of appeals court judge and Notre Dame Law School professor Amy Coney Barrett to the Supreme Court. Catholics favored Barrett's confirmation by nearly 20 points with just 28 percent expressing opposition. Two-thirds of respondents said a nominee's faith should not be a topic for questioning during confirmation hearings.

"Likely Catholic voters favor the confirmation of Amy Coney Barrett by almost twenty percentage points, and a majority also agree that her faith should not be considered by the U.S. Senate in the confirmation process," Matthew Bunson, executive editor of EWTN News, said in a release. "These are concerns among Catholics about religious liberty that we have been tracking in our previous polls, and clearly Catholics do not like policies or politics that threaten to use religious attacks to achieve a specific agenda."

In 2016, Trump won the Catholic vote by 7 points, thanks to a dominating margin of victory among white Catholic voters. Hispanic Catholics overwhelmingly backed Democratic nominee Hillary Clinton. Immigration and social issues that have typically defined the battle for Catholic voters may take a backseat in 2020, according to Volpe. The coronavirus may remain the great equalizer in the election.

"If President Trump wants to change his polling among Catholics, this data suggests it would be wise to address the concerns they have about the coronavirus and the economy," Volpe said.

Both campaigns have courted Catholic voters in the closing months of the election, as Trump has signaled support for abortion restrictions and defended religious adoption agencies. Biden, meanwhile, has centered his appeal on his personal life. The Biden campaign launched a multimillion-dollar advertising campaign aimed at shoring up support among Catholic voters who may be skeptical about Biden's support for taxpayer-funded abortion and opposition to a Supreme Court ruling on religious liberty. The ads highlighted Biden's stories of loss and invoked his father's faith. If elected, Biden would be the country's second Catholic president.