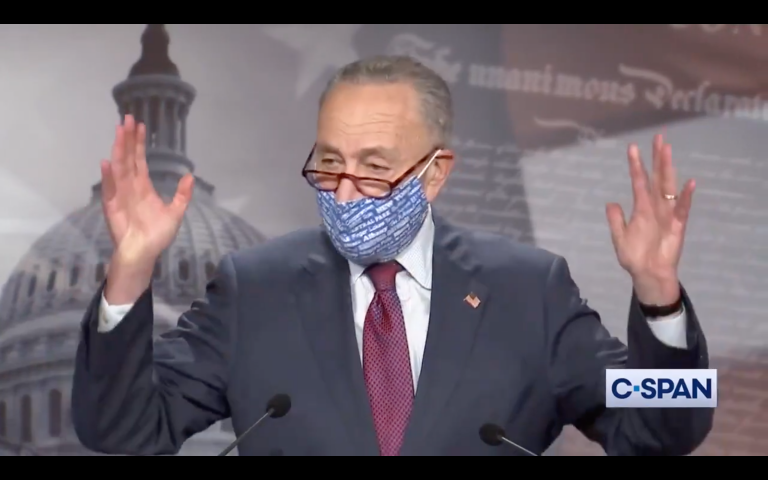 A reporter asked Schumer if he was considering pulling Feinstein from her perch as ranking member on the Senate Judiciary Committee in light of liberal criticism of her, and he did not give a definitive answer.

"I've had a long and serious talk with Senator Feinstein, that's all I'm going to say about it right now," Schumer said.

Feinstein came under fire for complimenting the committee's chairman, Sen. Lindsey Graham (R., S.C.), on the way he conducted the confirmation hearings for Trump's Supreme Court nominee. Many of her allies expected an all-out battle to stop Barrett, but Feinstein tempered her criticism following the controversy she created by criticizing Barrett's Catholic faith in a prior hearing. After the mostly civil hearings concluded, left-wing groups called for Feinstein to step down from her leadership position on the committee.

Feinstein's warmth toward Graham, who is in a fierce reelection fight, included praising the hearing's "fairness" and giving the South Carolina senator a hug.

"This has been one of the best set of hearings that I’ve participated in," Feinstein said as the hearings were adjourned. "It leaves one with a lot of hopes, a lot of questions and even some ideas perhaps of good bipartisan legislation we can put together."

Some of Feinstein's colleagues defended her, however. Sen. Mazie Hirono (D., Hawaii) said that Feinstein was "being gracious" in her praise of Graham.

The post Schumer Had ‘Long and Serious Talk’ With DiFi After Barrett Hearings appeared first on Washington Free Beacon.