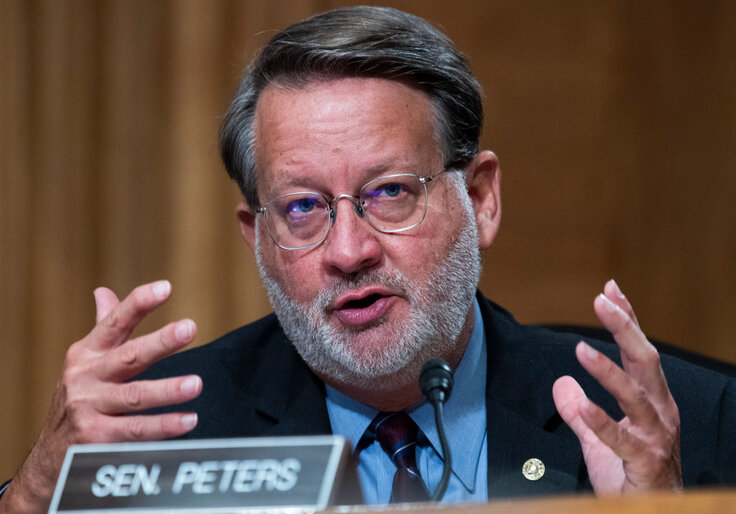 Peters has rarely shown up in black communities during the last six years and historically hired few black staffers, according to Detroit community leaders. They say that the senator's absence in the state's African-American community has eroded his standing with a demographic that typically leans heavily Democratic. The lack of African-American enthusiasm particularly stings for Peters because he is running against John James, a 39-year-old black Republican born in Detroit.

Pastor M.J. Reid, a conservative clergyman who works in a Detroit suburb, said that many Detroit residents struggle to even recognize Peters.

"Guys like Peters are considered to be just basically career politicians who are not really doing anything that's really had an effect in the black community," Reid told the Washington Free Beacon. "I would go as far as to say that if you would have talked to most black people, they probably would tell you they don't even know who he is in the city of Detroit."

Peters's lack of black support is one of the many reasons he has been forced into an unexpectedly difficult fight for political survival. Several pollsters say James is within striking distance of the senator, and a recent New York Times survey found Peters leading James by only 1 point. The race has become one of the most expensive in the country and presents an opportunity for the GOP to flip a Senate seat in an election cycle even as incumbent Republicans face their own tough reelection battles.

Before his election to the Senate in 2014, Peters represented a House district in Detroit that was 58 percent African American. Despite this, Peters's top Senate staffers—many of them holdovers from his time in the House—included no people of color in 2015, according to a report by the Joint Center for Political and Economic Studies. Peters's office has become more diverse since 2015—one in four staffers in his office are now African American or black, according to data published by Senate Democrats. Detroit community leaders, however, see little of that diversity represented in day-to-day politicking, especially compared to the office of Sen. Debbie Stabenow, Michigan's senior Democratic senator.

"In Stabenow's office, you always saw African Americans around. Debbie Stabenow was always cognizant of having people of color, but I just never knew many to be with Peters," said Steve Hood, a Detroit community activist and radio show host.

Hood, who identified himself as a "lifelong Democrat," said that Peters made limited efforts to reach out to the African-American community before the election year. Hood said that he will vote for Biden come November, but might split the ticket and support James.

"Gary Peters … hasn't shown up. That's the big problem," Hood said. "I'm a lifelong Democrat, and the guy hasn't shown up. And that's why he's not placing higher in the polls when he should be blowing James out."