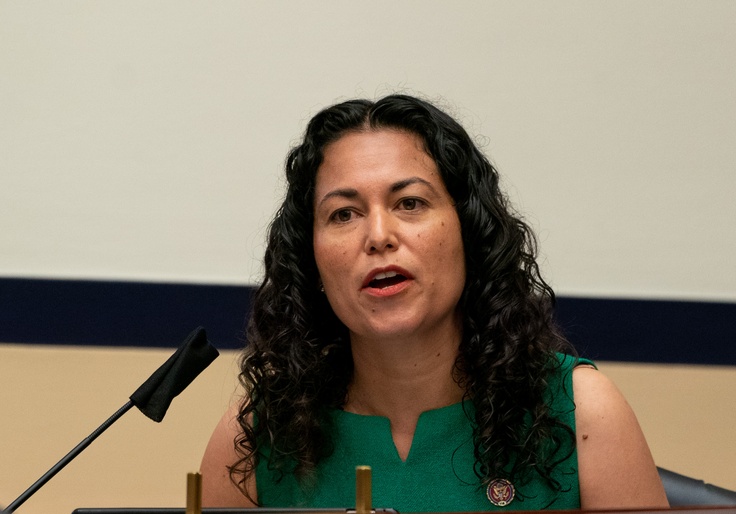 A vulnerable New Mexico Democrat campaigning as an advocate for the energy industry in an oil-rich district is scrambling to separate herself from presidential nominee Joe Biden and her past anti-oil activism.

Rep. Xochitl Torres Small (D., N.M.) has repeatedly tried to reassure constituents in New Mexico of her support for the oil and natural gas industry. Biden and vice-presidential nominee Kamala Harris have not made the job any easier, as both expressed support for fracking restrictions in the Democratic primary before walking back those positions in the general election campaign. Torres Small has her own history of campaigning to shut down fossil fuels and boost alternative energies.

In 2008, Torres Small participated in an anti-oil industry protest with approximately a dozen residents of New Mexico in support of then-U.S. Senate candidate Tom Udall (D.). She called for resistance to "Big Oil" and an increase in alternative energies in response to spiking gas prices.

"We're here fighting Big Oil and supporting someone who is not only against high gas prices, but is in favor of alternative energies," Torres Small, 23 years old at the time, told a reporter for the Las Cruces Sun-News. "Say no to Big Oil. Say yes to jobs," the group Torres Small was part of chanted.

Torres Small's campaign said the quote no longer reflects where the congresswoman stands on the issue of fracking.

"Rep. Torres Small's record is clear, she has stood up to her party and opposed its efforts to ban fracking and cut oil and gas workers out of COVID-19 relief," the Torres Small campaign told the Washington Free Beacon. "Her actions speak much more loudly than a completely out of context quote about the high cost of gasoline from when she was 23."

Torres Small's support for fracking while in Congress stands in opposition to many elements inside the Democratic Party. In February, she opposed a ban on fracking introduced by New York congresswoman Alexandria Ocasio-Cortez (D.).

"I’ve consistently opposed a fracking ban because if we shut down oil and gas drilling in New Mexico today, we’d have to shut down our schools tomorrow," she said in a statement.

Torres Small's stated support for fracking puts her at odds with the top of the Democratic ticket.

Joe Biden has changed his position multiple times over the course of the campaign regarding fracking. He told a climate-change activist he would "love to" ban fracking in December and told another voter in January that he agreed with a call to end fracking. In a March primary debate, he said there would be "no ability for the oil industry to continue to drill, period." He also said he favored banning all fracking, although his campaign later said he misspoke.

Kamala Harris also said there was "no question" she favored banning fracking during the Democratic primary, before reversing herself after being selected as Biden's running mate.

Biden's wavering on the issue caused a major Pennsylvania labor union to withdraw its support for him. Biden claimed to have "sat down" with union leaders to discuss his plans for energy production, which union officials said never happened.

"[Biden] said I will do away with fracking, then it was just fracking on federal land, so I don't know what his story is," the official said. "But I do know President Donald Trump has embraced our energy independence and wants to grow the infrastructure on energy—and the Boilermakers absolutely want to be a part of it."

Torres Small won the seat by a 2-point margin over Republican Yvette Herrell in the 2018 midterms. She will once again face Herrell in November in a district that President Trump carried by 10 points in 2016. The race is listed a toss-up by the Cook Political Report.

The post New Mexico Dem Scrambles to Distance Herself From Biden on Fracking appeared first on Washington Free Beacon.