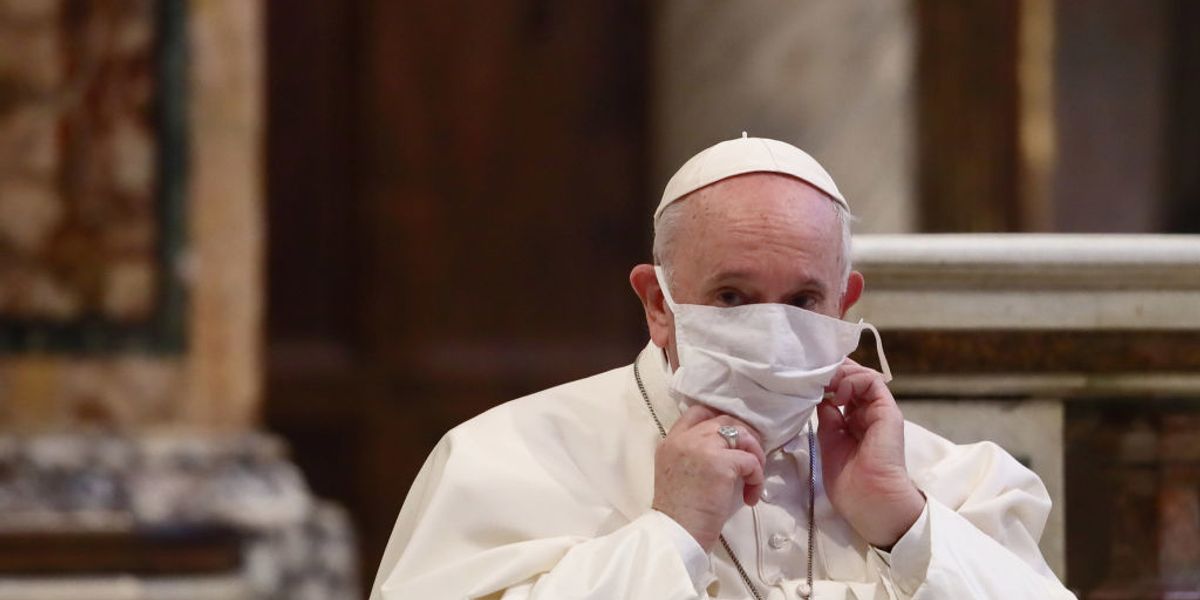 Pope Francis reportedly gave his approval to same-sex civil unions in a documentary released Wednesday, the first time he has done so as pope.

During an interview for the feature-length documentary "Francesco," which premiered at the Rome Film Festival Wednesday, the pope departed from his predecessors and Vatican doctrine to call for same-sex civil union laws for those who identify as homosexual, Catholic News Agency reported.

"Homosexuals have a right to be a part of the family. They're children of God and have a right to a family. Nobody should be thrown out, or be made miserable because of it," Pope Francis reportedly said in the film.

According to CNA, the comments were made during a discussion on Francis' views on pastoral care for those who identify as LGBT.

"What we have to create is a civil union law. That way they are legally covered," the pope reportedly said. "I stood up for that."

The film "Francesco" is a documentary exploring the life and ministry of Pope Francis. According to CNA, it "chronicles the approach of Pope Francis to pressing social issues, and to pastoral ministry among those who live, in the words of the pontiff, 'on the existential peripheries.'"

Francis' reported remarks seem to confirm reports that he previously voiced support for same-sex civil unions before he became the pope.

In 2010, while Francis was the archbishop of Buenos Aires, he opposed the legalization of same-sex marriage. Sergio Rubin, the pope's future biographer, claimed in 2013 that the newly elected pope had supported civil unions as a compromise position to prevent the full legalization of same-sex marriage. Rubin's claims were disputed by Miguel Woites, the director of AICA, the Catholic news agency of Argentina.

Activist and former theology professor Marcelo Marquez made similar claims, telling CNN in 2013 that during a 2010 phone call, the pope, formerly known as Jorge Mario Bergoglio, said he was in favor of gay rights.

"He told me. ... 'I'm in favor of gay rights and in any case, I also favor civil unions for homosexuals, but I believe that Argentina is not yet ready for a gay marriage law,'" Marquez claimed.

Pope Francis' new comments, specifically his reported statement "I stood up for that," would indicate the reports that he supported same-sex civil unions before he became pope were true.

CNA noted that in his 2013 book, "On Heaven and Earth," the pope wrote that laws "assimilating" homosexual relationships to marriage are "an anthropological regression." The pope also seemed to criticize adoption rights for gay couples, writing that if they "are given adoption rights, there could be affected children. Every person needs a male father and a female mother that can help them shape their identity."

In 2003, under the leadership of Cardinal Joseph Ratzinger and at the direction of Pope John Paul II, the Vatican's Congregation for the Doctrine of the Faith taught that "respect for homosexual persons cannot lead in any way to approval of homosexual behaviour or to legal recognition of homosexual unions. The common good requires that laws recognize, promote and protect marriage as the basis of the family, the primary unit of society."

"Legal recognition of homosexual unions or placing them on the same level as marriage would mean not only the approval of deviant behaviour, with the consequence of making it a model in present-day society, but would also obscure basic values which belong to the common inheritance of humanity. The Church cannot fail to defend these values, for the good of men and women and for the good of society itself," the CDF added, calling support for such unions from politicians "gravely immoral."

"Not even in a remote analogous sense do homosexual unions fulfill the purpose for which marriage and family deserve specific categorical recognition. On the contrary, there are good reasons for holding that such unions are harmful to the proper development of human society, especially if their impact on society were to increase," the document said.