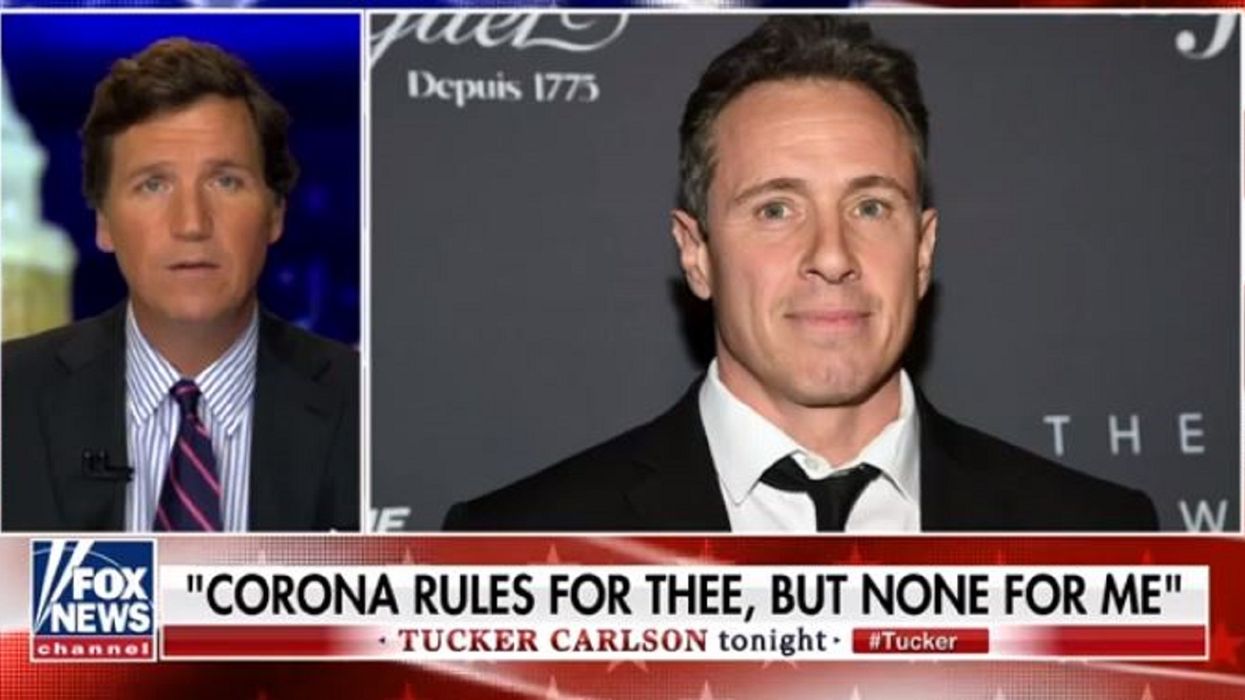 Fox News host Tucker Carlson has unveiled a letter addressed to CNN host Chris Cuomo from the building superintendent of his New York City residence, scolding the brother of New York Gov. Andrew Cuomo (D) and threatening to turn him in for repeatedly flouting the governor's mask mandate.

"Dear Mr. Cuomo," the letter begins. "As I am sure you know, because of the ongoing COVID-19 health crisis, on April 15, 2020 Governor Cuomo issued Executive Order 202.17, which requires anyone over the age [of] two to wear a face mask or cloth that covers their mouth and nose while in a public space."

It continues, "You have been observed entering and exiting the building and riding the elevator without the required face coverings. Even though staff members have asked you to comply with this requirement, you have refused to do so. This is a violation of the Executive Order, building policy, and places other residents and our staff at risk. There are no exceptions to this rule, and you are required to comply."

The letter reportedly goes on to threaten Cuomo with a $500 fine if he continues to violate the mask policy.

According to Carlson, his show, "Tucker Carlson Tonight," was able to speak with Cuomo's building manager and verified the letter's authenticity. The Fox News host joked that the letter itself belongs "in the museum of hypocrisy."

Carlson goes on to play several clips of Chris Cuomo urging others to wear masks, and shows footage of Andrew Cuomo telling New Yorkers that they "could literally kill someone" by refusing to wear a mask in public spaces.

This is not the first time Carlson has exposed Chris Cuomo's hypocrisy on mask-wearing.

Earlier this month, the Fox News host shared photos purportedly showing Cuomo maskless in public while smoking a cigar outside a restaurant believed to be on Long Island.

The Daily Mail noted that "Cuomo scrutinized Trump for flouting face masks after numerous members of his inner circle, White House staffers, journalists and workers at the Cleveland presidential debate contracted COVID-19 after his diagnosis."

Cuomo himself contracted the coronavirus in the Spring, and was roundly criticized after he was busted fibbing about remaining in quarantine as required.

The "Cuomo Prime Time" host went viral in April for videotaping his "official reentry" from quarantine into the rest of society following his own COVID-19 diagnosis. During his dramatic reentry, Cuomo insisted that he'd been stuck in the family's basement for weeks during his convalescence.

However, it was shortly revealed that Cuomo was seen walking outside of his second property, and even engaged in an altercation with a cyclist while he was on the mend and purportedly confined to the family's basement.