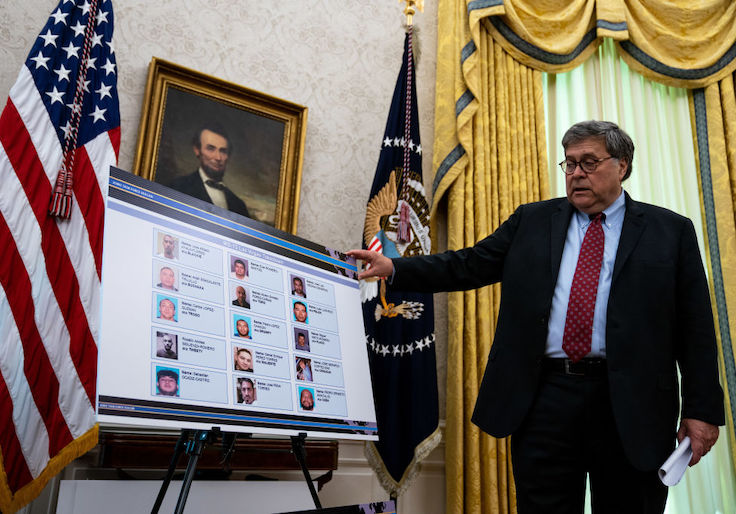 Seventy-four percent of MS-13 gang members charged by federal prosecutors between 2016 and 2020 were in the country illegally, according to a Wednesday Justice Department report.

The report details law enforcement agencies' efforts to take down MS-13, one of the world's most violent gangs, during President Donald Trump's term.

The department charged 749 MS-13 members between 2016 and 2020. Of those charged, only 11 percent were legally present in the United States. Eight percent were U.S. citizens, and the other 3 percent were otherwise in the country legally.

Most of the federally prosecuted MS-13 gang members, though, had entered the United States illegally through the southern border, the report noted.

During the Trump administration, critics have painted the president as anti-immigration for his efforts to ramp up border security.

Federal authorities, however, have cited "weaknesses" in immigration policies as reasons for the expansion of MS-13 and other international crime organizations across the United States and Central America.

Murder, human trafficking, assault, conspiracy to commit terrorism, felony possession of a firearm, and narcotics distribution were among the primary charges federal authorities brought against the gang.

Of gang members charged, 504 have been convicted, and federal authorities are seeking the death penalty for two who have been charged with murder.

In a 2017 executive order, President Trump instructed the Justice Department to coordinate efforts with other federal law enforcement agencies, including the FBI and Department of Homeland Security, to begin cracking down on "Transnational Crime Organizations" such as MS-13.

In a statement, Attorney General William Barr said that while the United States still has work to do in dismantling MS-13, U.S. law enforcement agencies have successfully thwarted key elements of the gang's "command and control" and "significantly degraded" its capabilities.

Started in the late 1970s by Salvadoran immigrants to Los Angeles, MS-13 is notorious for its brutal and indiscriminate murders, often by machete. Its operations extend across 24 U.S. states as well as El Salvador, Guatemala, Honduras, and Mexico, and some believe MS-13 cells now exist in Italy and Spain.