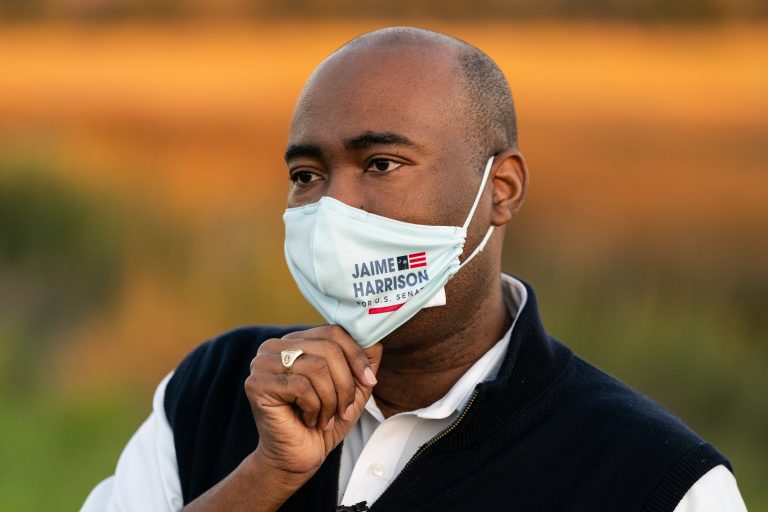 Liberal outside groups have adopted the playbook set by South Carolina Democrat Jaime Harrison, pouring money into an effort to boost a conservative third-party candidate who dropped out of the Senate race weeks ago.

A political action committee founded by national Democratic operatives to help Harrison's campaign—Lindsey Must Go PAC—recently spent more than $133,000 on mailers highlighting former Constitution Party candidate Bill Bledsoe, who has dropped out of the race and thrown his support behind Republican Sen. Lindsey Graham. The mailers say Bledsoe is "the only true conservative on the ballot." 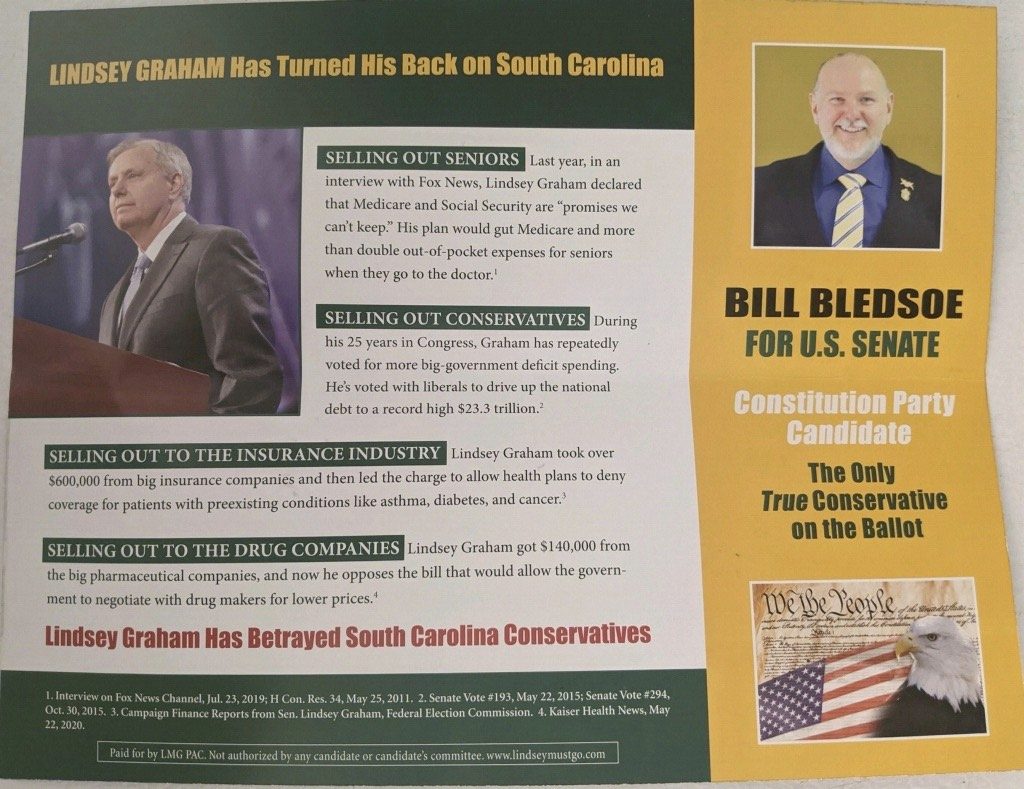 The mail campaign comes just days after Harrison launched a series of ads emphasizing Bledsoe's conservative agenda. The ads call Bledsoe "the only Senate candidate who stood with President Trump on day one" and note that he "opposes all abortions" and "believes that any gun-control law infringes upon the Second Amendment." The ads also link to a website paid for by the South Carolina Democratic Party, which calls Bledsoe "pro-Trump," "pro-gun," and "anti-abortion."

Bledsoe, however, ended his campaign to endorse Graham on October 1, telling the Associated Press that Trump "asked that conservatives stand together and reelect Lindsey Graham in order to help make America great again." His campaign failed to raise a single dollar, according to Federal Election Commission disclosures.

Harrison is not the only red-state Democrat working to siphon votes away from a Republican opponent by boosting a third-party candidate. A liberal super PAC backing Kentucky Senate nominee Amy McGrath—Fire Mitch Save America—spent more than $77,000 on mailers propping up libertarian candidate Brad Barron. The mailers call Barron, whose campaign has disbursed less than $17,000, a "better choice for U.S. Senate" who "believes in freedom, liberty, and individual rights." McGrath's campaign asked "people who are interested in contributing beyond the legal limits" to give to Fire Mitch Save America in January.

Harrison, who did not respond to a request for comment, personally boosted Bledsoe's candidacy during an October MSNBC appearance.

"It's Lindsey Graham, myself, and Bill Bledsoe, who's a Constitution Party candidate," Harrison said. "He's also listed on the ballot."

Bledsoe ended his campaign after ballots were already printed in South Carolina, meaning his name will appear alongside Graham and Harrison come November. Graham blasted the liberal effort to boost Bledsoe during a Monday campaign event, suggesting that the tactic is a sign of desperation for Harrison.

The PAC has raised more than $3.4 million as of September 30 and spent roughly $1.15 million as of October 14, FEC disclosures show. More than $460,000 of the PAC's disbursements have been funneled to Washington, D.C.-based firm PDG Strategies for "fundraising consulting," "legal services," and other expenses. PDG Strategies is listed on the PAC's "about us" page, and the firm's website lists the same address and phone number as the Peter Damon Group, where Groves serves as a "senior advisor."

Lindsey Must Go PAC has also funneled $20,000 to SPEAK Strategic, a South Carolina consulting firm founded by PAC spokesman Tyler Jones, meaning at least 42 percent of the PAC's total expenditures have gone to firms tied to its members.

Lindsey Must Go PAC did not return a request for comment.