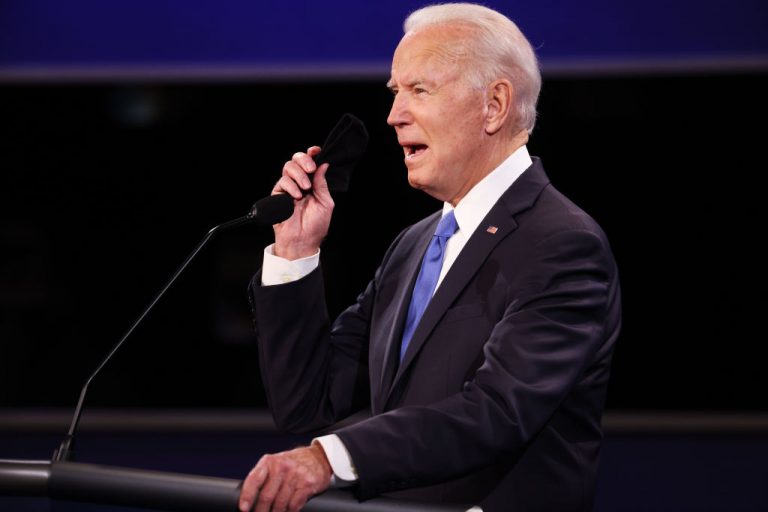 "To all you teachers out there: Not that many of you are going to die, so don't worry about it. C'mon!"

So said former Vice President Joe Biden during the final presidential debate on Thursday, defying the Democrat-aligned teachers' unions that have fought to keep schools closed across the country.

"Social Security will be bankrupt by 2023, with no way to make up for it," said Biden, who could have pushed for Social Security reform during his decades-long career in federal office.

"We're about to go into a dark winter," Biden said, laying out his vision for America's future, which was rife with criticism of his former boss, President Barack H. Obama.

"I support private [health] insurance," said Biden, who conspicuously refused to condemn pedophiles during the debate. "I beat all those other people [in the Democratic primary] because I disagreed with them."

In addition to dissing his running mate, failed presidential candidate Kamala Harris, the former VP boasted that if he wins the election, and the Supreme Court strikes down Obamacare, the U.S. health care system will "become Bidencare," which unlike Obamacare "will, in fact, provide for … affordable health care."

Biden attempted to position himself as above the fray of partisan politics, but didn't always succeed in doing so. "I don't look at this as red states, blue states. These are the United States," Biden said in response to a question about increasing rates of COVID-19 infections. "But look at where the spikes are happening, they're all the red states."

Once again, Biden refused to accept the consensus of scientific experts and acknowledge the existence of his seventh grandchild, a boy identified in Arkansas court documents as "NJR"—the son Hunter Biden fathered with an exotic dancer who goes by the stage name "Dallas."

Speaking of Hunter Biden, the former VP insisted that there was nothing "inappropriate or unethical" about his renegade son's international business dealings in China and Ukraine, and denounced President Donald J. Trump's efforts to "bring up all this malarky."

At the end of the day, Biden's dark vision for American was "trumped" by the president's expectations-shattering performance on the debate stage. Trump concluded the evening by reiterating his pledge to make America great again. "If [Biden] gets in, you will have a depression the likes of which you have never seen," Trump said.

The post ‘We’re About to Go Into a Dark Winter’: Joe Biden Lays Out Positive Vision for America’s Future appeared first on Washington Free Beacon.