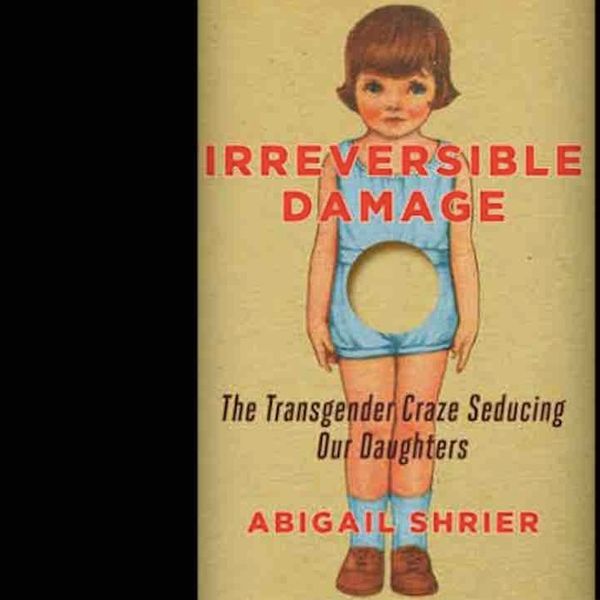 UPDATE, 4:01 p.m.: Target told TheBlaze Friday afternoon that "Irreversible Damage" is back on sale on its website: "Yesterday, we removed a book from Target.com based on feedback we received. We want to offer a broad assortment for our guests and are adding this book back to Target.com. We apologize for any confusion."

TheBlaze on Friday afternoon checked Target's site, and "Irreversible Damage" is back on it.

Target is being blasted for removing a book — "Irreversible Damage: The Transgender Craze Seducing Our Daughters" by noted Wall Street Journal contributor Abigail Shrier — after a complaint on Twitter that the book is spreading "transphobia."

Shrier's book was released in June, and the likes of
Joe Rogan, Ben Shapiro, and Dennis Prager have interviewed her about it.

As indicated in the title, the book isn't about transgenderism generally but specifically about the impact it's having on girls — "who had never experienced any discomfort in their biological sex until they heard a coming-out story from a speaker at a school assembly or discovered the internet community of trans 'influencers,'" according to the book's
description.

"Unsuspecting parents are awakening to find their daughters in thrall to hip trans YouTube stars and 'gender-affirming' educators and therapists who push life-changing interventions on young girls — including medically unnecessary double mastectomies and puberty blockers that can cause permanent infertility," the description also says.

What was the complaint about the book?

Twitter user @BlueIris04 complained to Target that "Irreversible Damage" is guilty of "transphobia" and said the "trans community deserves a response" from Target as to why it's selling the book.

Incidentally, @BlueIris04 uses "ACAB" — which stands for "all cops are bastards" — as well as the word "Ten" with an image of a skull for a Twitter handle. At some point @BlueIris04 blocked access to his or her tweets — but a screenshot of the complaint was saved:

@AskTarget @BlueIris04 lol they changed it but screenshots are forever https://t.co/TmCC5AYnWu

Later @AskTarget replied to @BlueIris04 that "Irreversible Damage" was
removed from its "assortment" of books: 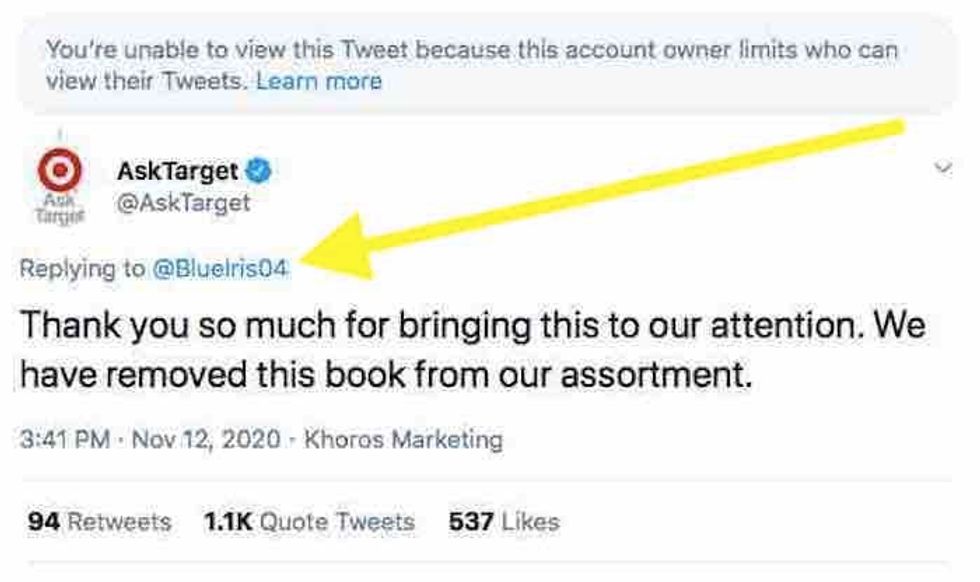 TheBlaze on Friday morning conducted a search on Target's website for Shrier's book, but it did not show up.

How are folks reacting to Target removing the book?

While some applauded Target's removal of "Irreversible Damage," other Twitter users weren't so keen on the decision:

What did the book's publisher have to say?

The "Woke, Inc." trend is, sadly, only getting worse. The mob has sufficiently trained big corporations like Target to live in fear — so much so that it only took *one* complaint from a Twitter user to convince Target to pull a bestselling book from its website. But as Target and other cowardly corporations cower in fear of leftist mobs, Regnery has always and will continue to stand proudly behind powerful voices like Abigail Shrier and the tremendously important work she has done in researching and writing "Irreversible Damage."

What did Target have to say?

Target on Friday morning didn't immediately respond to TheBlaze's request for comment on the retailer's rationale behind removing "Irreversible Damage" from its website.

This story has been updated.