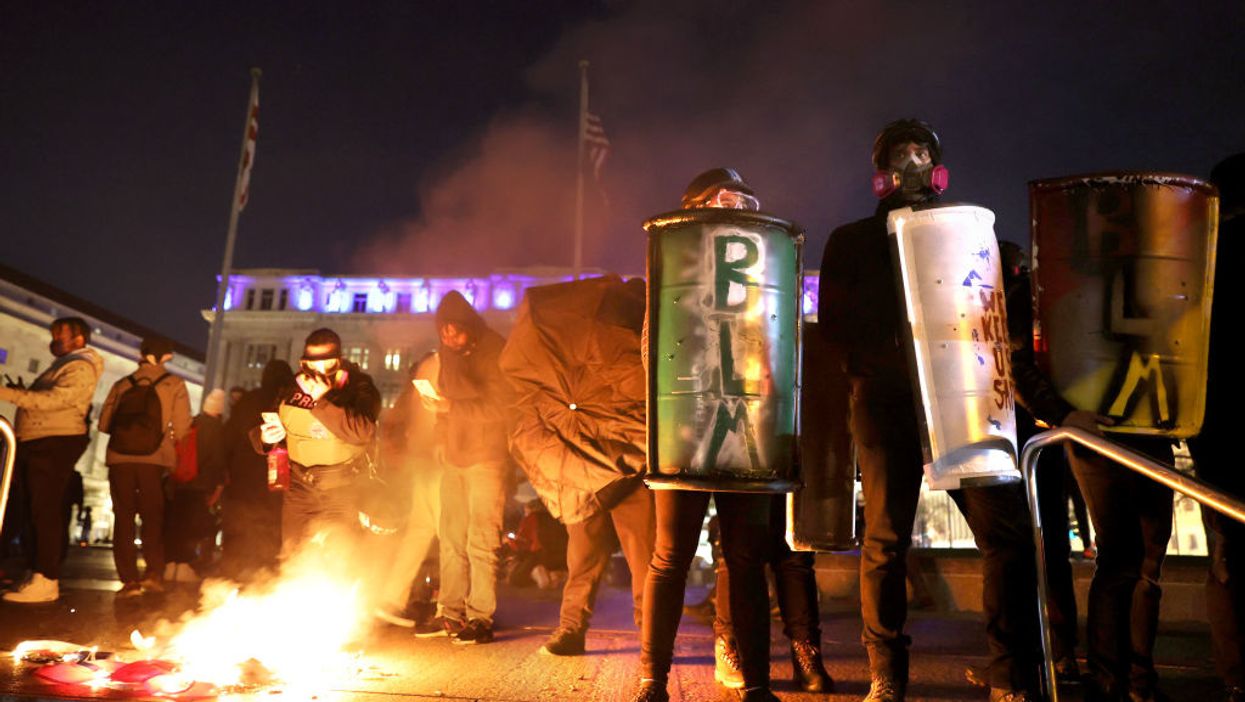 Thousands of Trump supporters gathered in Washington, D.C., on Saturday for the Million MAGA March. The first hours of the rally for President Donald Trump was a peaceful protest. Then counterprotesters entered the area by mid-afternoon. Right before nightfall, there were numerous attacks on Trump supporters, including an assault of a multiracial family and one man was knocked out. The violence against Trump supporters only grew as the massive crowds from the "Stop the Steal" rally diminished and the sun set.

A swarm of counterprotesters surrounded and harassed an elderly couple holding a Trump flag in Washington, D.C. Some in the group were holding signs for Refuse Fascism, a self-described "national movement organizing to drive out the Trump/Pence regime."

Washington DC: an elderly couple is accosted for having a trump flag. https://t.co/4dy9U5Ww5r

An elderly man was shoved to the ground when he attempted to get on a bicycle in Black Lives Matter Plaza. Then an agitator held the man's bike down, and he retaliates by shoving him. As the man is walking away, the crowd tosses a liquid at him and starts chanting: "Black lives matter!"

DC: BLM and Antifa threaten and intimidate an elderly Trump Supporter out of BLM Plaza

Unknown liquids can be see… https://t.co/XGyFoEf5VI

A teen couple attempted to flee from a gang of counterprotesters; the girl is seen terrified and crying. They are hit with liquid, and then two women try to rip the girl's "Make America Great Again" hat from her hands, as seen in footage taken by Drew Hernandez.

Black bloc assailants brutally attack a man and then beat him with a flagpole attached to an American flag. A person on a megaphone shouts, "What the f*** did you think was gonna happen?"

DC: Antifa and BLM physically assault a Trump Supporter by macing him and beating him over the head with a flag pole https://t.co/FG63zpe7Tl

Black bloc protesters shot fireworks at Trump supporters who were dining outside. One of the fireworks exploded dangerously close to a couple.

Antifa and BLM members attack people who are eating dinner near BLM Plaza. They threw projectiles and a large firew… https://t.co/SYFhe7ta9S

Hundreds of anti-fascist and Black Lives Matter supporters swarmed hotels that Trump supporters were staying in try to intimidate them. The crowd, some waving Biden flags, chant: "F*** Donald Trump."

Police used a chemical agent on anti-Trump protesters after they refused to back away from the Capital Hilton.

Protesters are at the police line as they chant against Trump supporters that have returned outside the hotel… https://t.co/MAenuUHUjM

DC: Hundreds of Antifa and BLM have swarmed “The Capital Hilton” hotel on an effort to intimidate Trump Supporters… https://t.co/1aBec2mFjq

Protesters have surrounded the front of the Capital Hilton, chanting “F*** Donald Trump” next to the line of police… https://t.co/Lo5XEywS1r

DC: Antifa and BLM get mopped up by MPD after they swarmed “The Capital Hilton” hotel on an effort to intimidate Tr… https://t.co/ghVXLRpRNL

Protester hit by chemical agent by police cries as she gets her eyes washed out with water https://t.co/EfGRbecb2R

There was a huge brawl between Proud Boys and anti-fascists.

Open violence, projectiles being thrown, batons and sticks being used in a full melee down here. https://t.co/iq8ZjgH5Cd

Despite all of the violence directed against them, Trump supporters rallied on Saturday night to sing the national anthem in unison.

Daily Caller photojournalist Jorge Ventura shared his footage of physical attacks that occurred during the Million MAGA March with authorities, which reportedly led to the arrest of five assailants.

The footage of the brutal assault was captured by myself and @FromKalen. We gave the footage to authorities and the… https://t.co/WzkFqo4Wnw