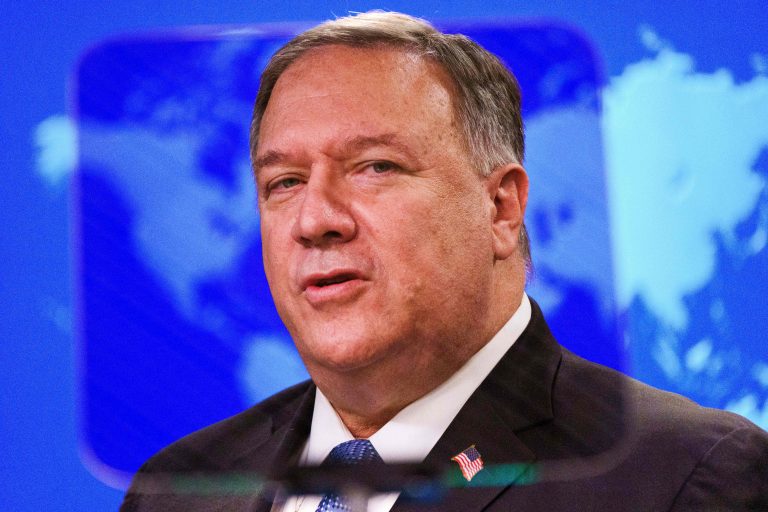 PARIS—Secretary of State Mike Pompeo arrived in a locked down Paris Saturday morning to start a 10-day jaunt across Europe and the Middle East that comes amid a backdrop of the Trump administration’s last-ditch legal efforts to remain in office.

The nation’s top diplomat is likely to offer private assurances to world leaders that if former vice president Joe Biden takes office, the Trump administration will assist with an orderly transition. Many of the leaders Pompeo is scheduled to meet have already congratulated Biden on his win. Pompeo’s seven-nation tour also will take him to several Middle Eastern hotspots—including Israel, Saudi Arabia, Turkey, Qatar, and the United Arab Emirates—where Iran’s global terrorism operation is likely to be a secondary focal point with world leaders.

Pompeo raised eyebrows on Friday when he stated during a press conference at the State Department that there will be a "smooth transition to a second Trump administration." While Pompeo, like other top administration figures, maintains that Trump won the 2020 presidential election, he clarified a day later in an interview with CBS News that an orderly transition will take place before Jan. 20 no matter who is declared the victor.

"Our adversaries should know that we're ready, we're continuing to work, we'll work all the way through January. And then on January 20th, we'll have a transition, whether it's to a Trump administration—a second Trump administration as I spoke about today—or to an administration led by former vice president Biden," Pompeo said.

The trip also comes amid the still growing coronavirus pandemic, which has initiated a new wave of global lockdowns. Pompeo had virtually no public press conferences scheduled as the trip began, which are usually customary with visits by senior U.S. officials. In Paris, the city is two weeks into a monthlong, full-scale lockdown. Most of the Middle Eastern countries Pompeo is scheduled to visit also are shut down due to the virus.

The trip began with a spark of controversy: Pompeo will visit Istanbul, Turkey, but will not take meetings with the country’s leaders in the capital, Ankara. U.S. officials who briefed reporters ahead of the trip said Pompeo wants to focus on issues of religious liberty, and he is scheduled to meet several prominent figures, including the Greek Orthodox Christian leader Ecumenical Patriarch Bartholomew I. Turkish political leaders view Pompeo’s agenda as a snub, with the country’s foreign ministry calling his meetings "extremely inappropriate."

During his two days in Paris, Pompeo will meet with French president Emmanuel Macron and participate in a wreath-laying ceremony to honor victims of the city’s most recent terrorist attacks. These events will be tightly managed and limited to a small pool of reporters that excludes most of those traveling with the secretary on his plane.

From Paris, Pompeo will head to Istanbul.

He also will travel to Georgia for meetings with President Salome Zourabichvili, Prime Minister Giorgi Gakharia, and Minister of Foreign Affairs David Zalkaliani. While there, Pompeo will "reaffirm our support of Georgia’s sovereignty and territorial integrity within its internationally recognized borders," according to a senior State Department official, who emphasized the Trump administration "condemn[s] Russia’s invasion in 2008 of the Georgian regions of Abkhazia and South Ossetia, which still remain occupied by Russia."

As with past trips to the Middle East, Pompeo will work to "counter the Iranian regime," according to the State Department. This will include powwows with Israeli prime minister Benjamin Netanyahu and leaders in Saudi Arabia, Qatar, and the U.A.E—all of which share the United States’ concerns about Iranian-backed terrorism.