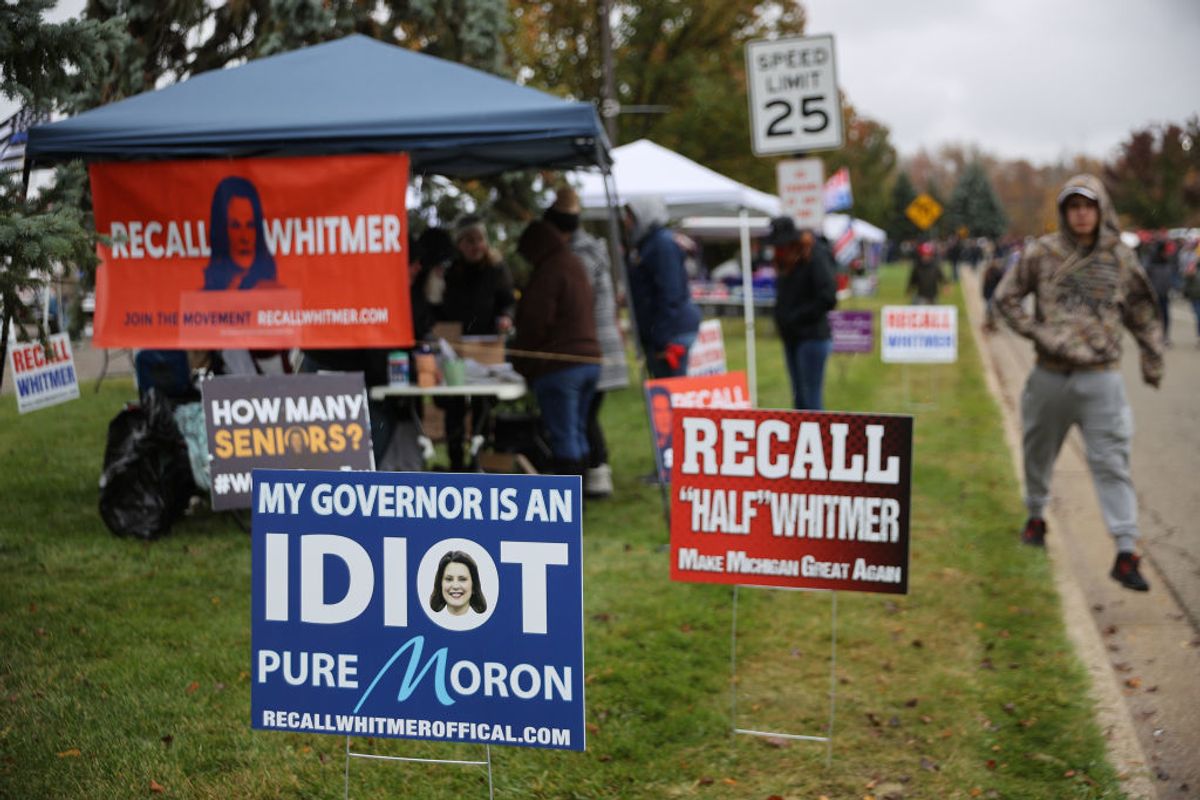 In a Facebook post written Sunday, GOP state Rep. Matt Maddock and several of his Republican colleagues announced they are seeking to hold "impeachment hearings for Governor Whitmer" in the state House of Representatives, WXYZ-TV reports.

The Facebook post lists several reasons why Republicans say Whitmer should be impeached and removed from office including: ignored court orders; ignored due process and the legislature; and "using our kids as political pawns and denied special needs students who depend on the services that occur during in-person classes."

The Michigan Constitution empowers the state House of Representatives to impeach "civil officers for corrupt conduct in office or for crimes or misdemeanors."

In a statement responding to these GOP lawmakers, Whitmer's office said the governor "doesn't have any time for partisan politics or people who don't wear masks."

"Governor Whitmer doesn't have any time for partisan politics or people who don't wear masks, don't believe in science, and don't have a plan to fight this virus. Right now, she is focused on saving lives. The governor will continue to work hard for all 10 million Michiganders. This is about Michigan vs. COVID-19. Governor Whitmer doesn't care if you're a Trump Republican or a Biden Democrat. We are all in this together," Whitmer press secretary Tiffany Brown said.

The governor also appeared on TV to address the impeachment calls from state Republicans.

"Part of the problem throughout this pandemic has been that there's been so much partisanship around this public health crisis," Whitmer said. "Unfortunately, while we've done a lot of outreach with the Michigan legislature, Republican leaders have shown very little seriousness around this issue."

She criticized Republicans for refusing to wear masks and said "they don't even know how to protect themselves."

Whitmer on Monday claimed she has the authority to issue a second stay-at-home order in response to surging coronavirus cases that have led to an increase of hospitalizations and deaths in the state.

New coronavirus restrictions in Michigan will be put into effect Wednesday. High schools and colleges must stop offering in-person classes, restaurants must end indoor dining, and entertainment businesses such as movie theaters, bowling alleys, and casinos must close for three weeks.

The Michigan Supreme Court previously ruled that Whitmer's first coronavirus-related executive orders were "an unlawful delegation of legislative power to the executive branch in violation of the Michigan Constitution." These new restrictions come from the Michigan Department of Health and Human Services rather than from the governor's office directly, potentially bypassing the court's order.

After the court ruled in October, Whitmer said she would use "alternative sources of authority" to implement coronavirus restrictions that "were not at issue" in the court's decision.