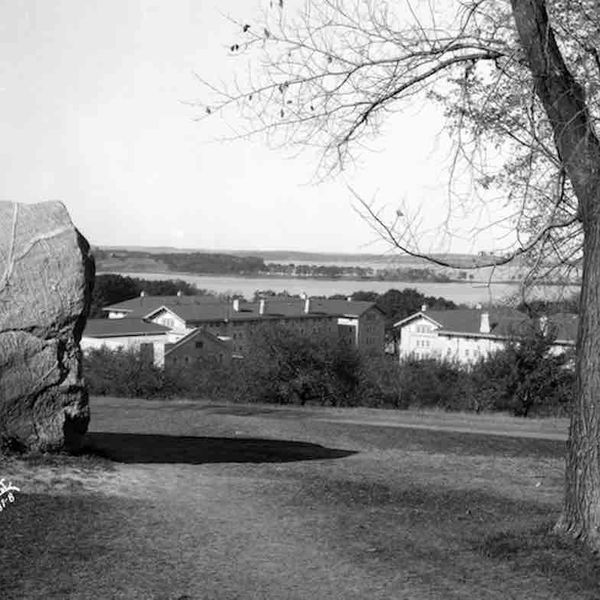 At the University of Wisconsin-Madison is a 70-ton boulder named Chamberlin Rock — in honor of Thomas Crowder Chamberlin, a geologist and former university president, the Wisconsin State Journal reported.

But on Oct. 9, 1925, the Wisconsin State Journal printed a story about the process of digging up the boulder — and it was referred to in the story as a "n*****head," which was a commonly used expression in the 1920s to describe any large dark rock, the paper said.

It's unclear if or for how long the boulder was called that racist name, the Journal said, adding that the term itself appeared to fade from common usage by the 1950s. In addition, the paper said university historians identified the news story as the only known instance of the offensive term being used.

But in the wake of George Floyd's death in May and the nationwide protests and rioting that followed — including the tearing down and demands for removal of statues and monuments with any connection to racism — the Wisconsin Black Student Union followed suit over the summer and called for the removal of Chamberlin Rock, the Journal said.

Blank has previously indicated she supports the rock's removal, the Journal added, although a timeline for such a project hasn't been established.

"This is a huge accomplishment for us," she told the Journal on Wednesday. "We won't have that constant reminder, that symbol that we don't belong here."

Kacie Butcher, the university's public history project director, said there was a Ku Klux Klan presence throughout Madison in the 1920s and on-campus minstrel shows, the Capital Times reported.

"That racism hasn't left campus. It's just changed, and this rock … is a symbol of this ongoing harm," Butcher said, according to the Times. "We have a real opportunity here to prioritize students of color and their experiences — something we haven't really done historically — and this is an opportunity for us not to trivialize these demands, but instead truly engage in these really complex conversations."

As far as what will happen to the rock once it's lifted from its spot, the Journal said options include burying it at its original resting place, breaking it apart and disposing of it, or moving the rock to the Ice Age Trail — a thousand-mile footpath formed by glacial ice in Wisconsin.

More from the paper:

The Black Student Union is conducting a survey and hosting an open forum on Sunday to gather feedback on members' preferences, which it will then take back to the Campus Planning Committee.

The group is also working with the Department of Geoscience, which sees educational value in the rock and its rich geological history. Carried by glaciers from perhaps as far north as Canada, the boulder was excavated from the side of Observatory Hill in 1925.

Geochronology professor Brad Singer told the committee the department prefers it be relocated so instructors can continue using it as a teaching tool.

UW-Madison needs to secure approval from the Wisconsin Historical Society before removal begins because the rock is located near an effigy mound.

The first step requires UW-Madison to submit a request to disturb a catalogued burial site. All Native Tribes of Wisconsin are notified during the process, which can take 60 to 90 days and includes a 30-day comment period. A qualified archeologist is also required to be on site during removal.

Once the rock is gone, McWhorter told the paper that the Black Student Union will focus on generating ideas for how students of color can reclaim the space, such as installing a piece of art.

"So it becomes a way to celebrate instead of having it as an empty space reminding us of what it once was," she added to the Journal.

The school's Black Student Union over the summer also called for the removal of an Abraham Lincoln statue on campus.

McWhorter at the time said the iconic former president who abolished slavery was "very publicly anti-black" and that "just because he was anti-slavery doesn't mean he was pro-black."

Since then the school's College Republicans launched a petition in opposition to the school's student government passing legislation that calls for the removal of Lincoln statue, the College Fix said.

The legislation from the Associated Students of Madison says the Lincoln statue is a "remnant of the school's history of white supremacy," the outlet said.

But Blank, UW's chancellor, pushed back on demand to remove the Lincoln statue, the Fix said, which cited her June statement on the matter:

The university continues to support the Abraham Lincoln statue on our campus. Like those of all presidents, Lincoln's legacy is complex and contains actions which, 150 years later, appear flawed. However, when the totality of his tenure is considered, Lincoln is widely acknowledged as one of our greatest presidents, having issued the Emancipation Proclamation, persuaded Congress to adopt the 13th Amendment and preserved the Union during the Civil War.

Blank also said as the "leader of UW-Madison, I believe Abraham Lincoln's legacy should not be erased but examined, that it should be both celebrated and critiqued," the Fix noted.