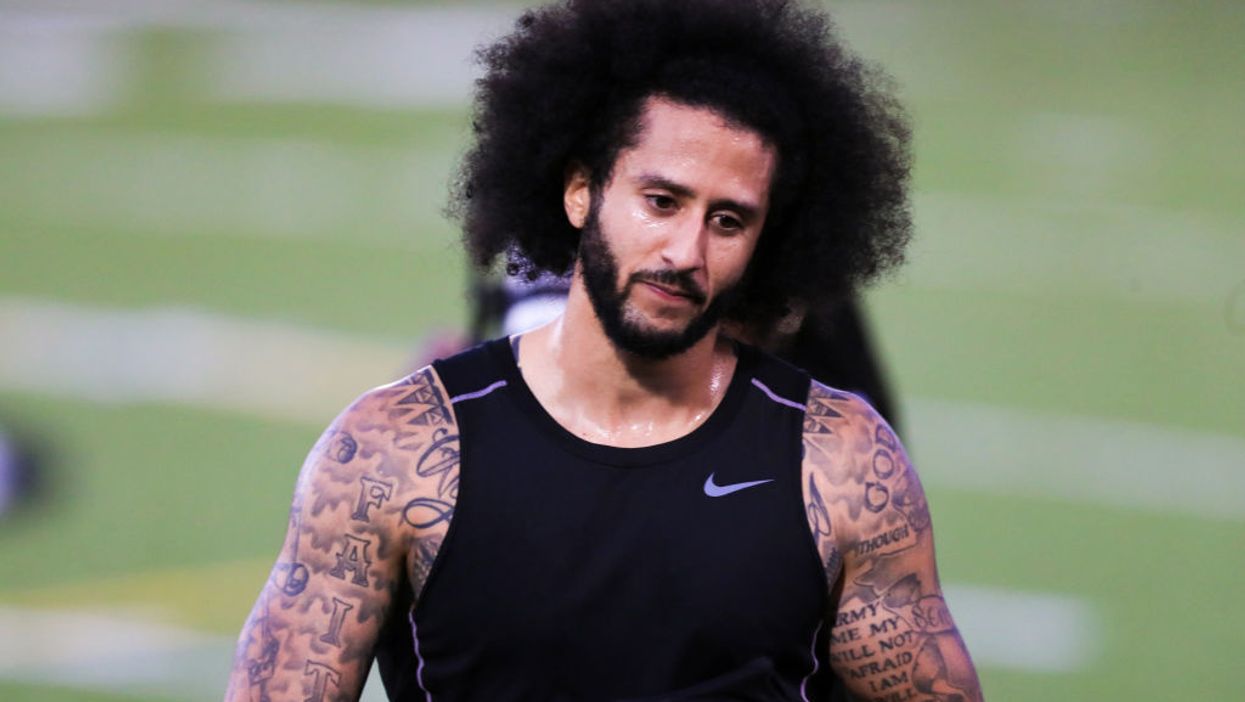 Activist Colin Kaepernick called for the release of Mumia Abu-Jamal, a former Black Panther who was convicted of killing a 25-year-old Philadelphia police officer in 1981.

The former NFL quarterback recorded a video for the "Bring Mumia Home" campaign, where he said that Abu-Jamal "is a human being who deserves to be free."

In the video that was released Monday, Kaepernick described Mumia as "a political prisoner who has since the age of 14 dedicated his life to fighting against racism [who] continues to be caged and lives his life on a slow death row."

"We're in the midst of a movement that says Black Lives Matter, and if that's truly the case, then it means that Mumia's life and legacy must matter," Kaepernick said in the video. "And the causes that he sacrificed his life and freedom for must matter as well."

The former San Francisco 49ers quarterback claimed Abu-Jamal was "framed" in the killing of Philadelphia police Officer Daniel Faulkner, and contends the former Black Panther member was not given a fair trial.

"Mumia has been in prison longer than I've been alive," Kaepernick said in the video that was shown at an event that involved Black Lives Matter Philadelphia and the Black Philly Radical Collective. "Since 1981, Mumia has maintained his innocence. His story has not changed."

Kaepernick believes that Abu-Jamal has had to endure "psychosocial torture" from being in prison for 38 years, which he says is "a second by second assault on the soul."

"Another article including a video statement on Kaepernick calling for the 'release of convicted cop killer Mumia Abu Jamal.' Kaepernick repeatedly states in video that Mumia has been in jail for 38 years and deserves freedom," the page stated. "Why on earth would he deserve freedom for committing a murder? The video shows Kaepernick truly has no knowledge on the true facts and evidence of his conviction. The ignorance of Kaepernick is a disgrace."

Abu-Jamal was convicted of first-degree murder after being found guilty in the shooting death of Faulkner in 1982. Abu-Jamal was originally sentenced to death, but he was resentenced to life in 2012.

"Faulkner was shot and killed in a scuffle after pulling over Abu-Jamal's brother in what was then 'the red-light district' as the bars closed," the Philadelphia Tribune reported. "Abu-Jamal, who moonlighted as a cab driver, came upon the scene and was found shot and wounded in the aftermath nearby. The prosecution witnesses testified that Abu-Jamal, then known as Wesley Cook, ran toward the scene and shot the officer. His brother never testified and soon left town."

"Just before 4 a.m. on Dec. 9, 1981, in a rough downtown neighborhood of Philadelphia, Police Officer Daniel Faulkner stopped a Volkswagen Beetle and arrested its driver, William Cook, for driving the wrong way down a one-way street," the Baltimore Sun reported. "Expecting or experiencing trouble, Daniel Faulkner radioed for assistance.

"When fellow police officers arrived, they found him lying in the street, shot in the back and the face," the news report stated. "A few feet away, slumped in his own pool of blood, was William Cook's brother, a free-lance journalist and black activist named Mumia Abu-Jamal – born Wesley Cook.

"Mumia Abu-Jamal, who moonlighted as a cab driver, later said that he had been driving by and, seeing a police officer hitting his brother, stopped his cab and rushed to his defense," the paper wrote in 1995. "His licensed .38 caliber pistol, which he had bought after having been robbed twice, was found at the scene."

There is an ongoing legal battle because Faulkner's widow, Maureen Faulkner, wants to remove Philadelphia District Attorney Larry Krasner from handling Abu-Jamal's appeals. The widow alleges there is a conflict of interest because the former law firm of Krasner's wife had represented Abu-Jamal in the past.

In February, the Pennsylvania Supreme Court ordered a special master to investigate the conflict of interest allegations, KYW-TV reported. The court assumed jurisdiction over the case, and has halted all legal appeals for Abu-Jamal.

The 64-year-old Abu-Jamal is currently serving a life term at the Mahanoy State Correctional Institution in Frackville, Schuylkill County.