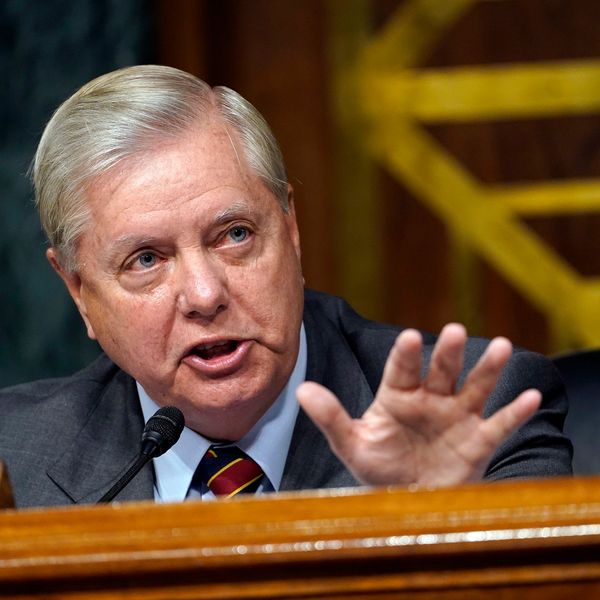 South Carolina Sen. Lindsey Graham (R) fired back Thursday after days of far-left House members calling for him to resign his seat, citing a claim from Georgia's GOP secretary of state alleging that Graham suggested he toss legal ballots in favor of President Donald Trump.

But Graham says he did no such thing and warned the "bunch of Socialists" calling for him to step down that he sees through their agenda.

Earlier this week, Georgia Secretary of State Brad Raffensperger (R) told the Washington Post that during a phone call with Graham, "it sure looked like" the South Carolina Republican was pressing him to throw out mail-in ballots in some counties where there were higher rates of non-matching signatures.

"That's ridiculous," Graham said in reaction to Raffensperger's claims. "What I'm trying to find out was how do you verify signatures for mail in ballots in these states ... I thought it was a good conversation, I'm surprised to hear him characterize it that way."

Georgia was, at the time, undergoing a recount after Democratic presidential candidate Joe Biden was projected to win the state by a very narrow margin against President Donald Trump. Several Republicans in Georgia and elsewhere criticized Raffensperger's handing of the election.

In the meantime, Graham had just handily won re-election in the seat he has held since 2003 against Democratic challenger Jaime Harrison in a major blow to Democrats, despite Harrison raising a record-shattering $57 million in the fourth quarter alone.

Progressive House members pounced on the opportunity to try to get Graham to leave office. Far-left Washington Rep. Pramila Jayapal (D) led the charge on social media, tweeting, "Lindsey Graham must resign. It has now been corroborated that he urged the Secretary of State in Georgia to find a way to throw out legally cast ballots. There must be accountability and justice for this dangerous attack on our democracy."

Jayapal's message was an apparent rallying cry for the far-left faction of the House.

Congresswoman Rashida Tlaib (D-Mich.) replied, "Lindsey Graham attempted to commit voter fraud. He can't get away with it. Thank you @PramilaJayapal for demanding accountability."

Minnesota Rep. Ilhan Omar (D) also declared that "it's time for Lindsey Graham to submit his resignation," pointing to an MSNBC report citing a Raffensperger staffer who purportedly corroborated the claims.

But Graham fired back on Thursday, posting the three congresswomen's quotes and tweeting, "I can understand why the Squad doesn't want me in the Senate - because I'm going to bury your agenda. You're a bunch of Socialists. You would transform America and make it Venezuela. I'm gonna stand in your way. I'm not going anywhere!"

He also said that their demands for his resignation meant he "must being doing something right," and added, "To those who are trying to silence me — you will fail miserably!"