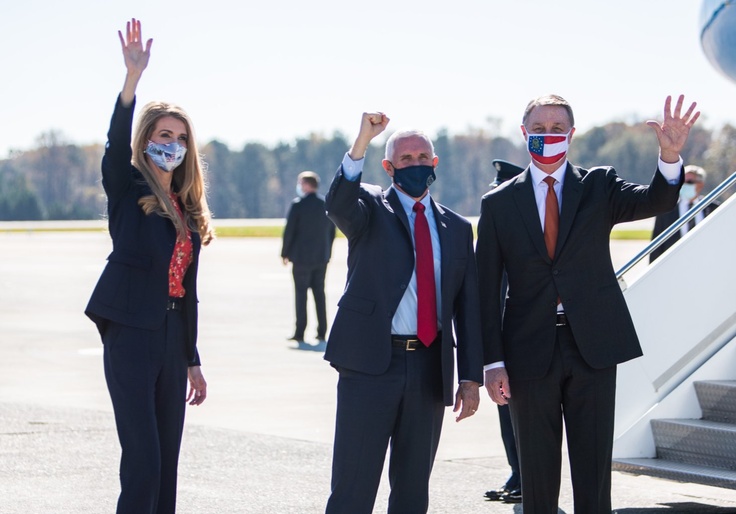 "Let’s show the world what Georgia is all about—that the agenda of Chuck Schumer and Nancy Pelosi is not the agenda of the people of Georgia," Pence said in Canton.

Republicans are counting on the vice president’s visit to spur turnout in the state's impending Senate runoff elections, which will determine partisan control of the upper chamber. Pence’s speech mirrored Perdue and Loeffler’s messaging—the Republicans pitched themselves as the "last line of defense" that will ensure congressional Democrats cannot pass progressive legislation like the Green New Deal.

The message resonated with Gary Brown of Atlanta, who told the Washington Free Beacon he attended the rally to "support the idea of a divided government."

"I like that they’re a firewall," Brown said, adding that he found Democratic calls to expand the Supreme Court and extend statehood to Washington, D.C., and Puerto Rico to be "disastrous."

Pence is the latest high-profile GOP official to join Perdue and Loeffler on the campaign trail, with former U.N. ambassador Nikki Haley and Sens. Marco Rubio (Fla.) and Tom Cotton (Ark.) all visiting the Peach State in recent days. The vice president praised Perdue and Loeffler for their "strong support" for the Trump administration.

"We’ve had the strong support of these senators every step of the way, when it came to our security, when it came to our prosperity, but also that is true when it came to the rule of law," Pence said. The former Indiana governor, meanwhile, criticized Democratic challengers Jon Ossoff and Raphael Warnock for supporting the "taxpayer-funding of abortion all the way up to the moment of birth."

Pence closed his speech by asking supporters to vote early and in person. In-person early voting begins in the state on December 14, and the runoff elections will take place on January 5.