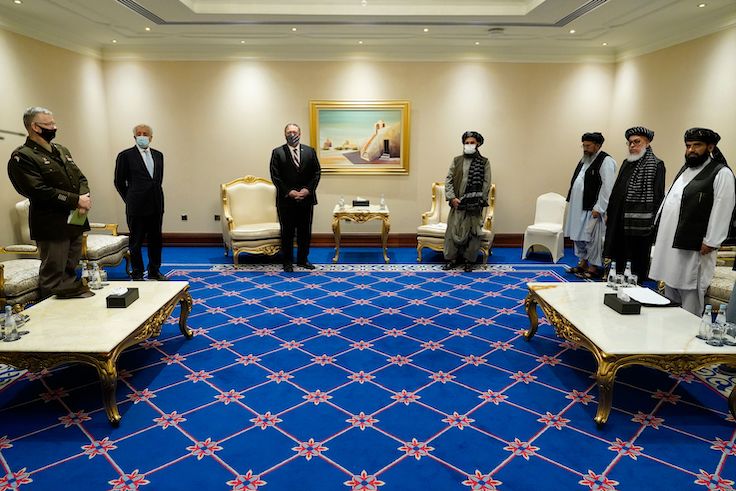 DOHA, Qatar—Secretary of State Mike Pompeo held a daylong round of talks with Gulf Arab leaders and representatives from the Taliban on Saturday, conversations that come as the United States moves to pull its troops out of war-torn Afghanistan.

Pompeo met with the Taliban’s senior leadership as part of ongoing negotiations hosted by the Qatari government in Doha. Pompeo praised the sides for sticking with the negotiations that could see the Afghan government strike a stable peace accord

with the Taliban terrorist group after decades of bloody violence. Talks have been taking place since February, when the Trump administration first announced the groundwork for negotiations.

The meetings came just hours after mortars struck several areas in Kabul, Afghanistan’s capital—a stark reminder that peace negotiations could deteriorate at any point. The Taliban denied responsibility for the attack.

As talks continue, the Trump administration is moving forward with plans to pull around 2,500 American troops from Afghanistan—a move that has been roundly criticized by both Democratic and Republican leaders. Senate Majority Leader Mitch McConnell, a typical Trump administration ally, called the plan "a mistake."

Incoming president Joe Biden has yet to comment on the plan, but he has expressed a willingness in the past to begin removing U.S. troops from the region.

Pompeo also talked to leaders in Doha and the United Arab Emirates about the ongoing threat posed by Iran and Trump administration efforts in its final months to further tighten the economic noose on Tehran. Gulf Arab leaders are already nervous about a Biden administration due to its vow to reenter the landmark nuclear deal with Iran and provide it with a new wave of cash assets. While the Trump administration has leaned into its ties with Saudi Arabia, the UAE, and Qatar, it is expected the Biden administration will pursue a policy centered on making Iran a more prominent regional player.