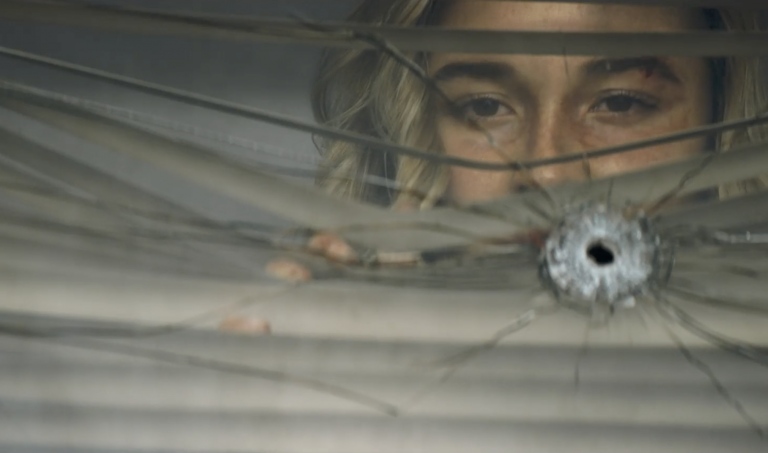 Fate has determined that Run Hide Fight follow on the heels of the January 6 attack on the Capitol. This will no doubt color the reactions of most viewers. It’s hard to sit through writer-director Kyle Rankin’s action thriller without noticing numerous points of relevance with the riot at the Capitol. The good guys are caught off guard and overrun by nihilistic losers, communication failures hamper law enforcement’s response, and someone’s head is bashed with a fire extinguisher, all while the event is broadcast on social media—by the perpetrators themselves.

Of course the movie did seek to be relevant and controversial, but not for the events at the Capitol that came months after its premiere at the 2020 Venice Film Festival. Run Hide Fight takes place all in a single day when Zoe Hull’s (Isabel May) high school is the target of a shooting. References to Columbine, Parkland, and the whole wretched scourge of school shootings are direct but avoid cheapness. Most admirably, it ultimately constructs a thorough repudiation of the logic of school shooters.

The setting is the most humdrum Middle America school imaginable, with the most basic teenagers making the most charmless "promposals" and playing the most banal pranks on that most juvenile of traditions, Senior Prank Day. Vernon Central High School is not awful; it’s just formless and devoid of character. It provides little meaning for students, and it’s clear the stage was set for a vacuum to be filled by online radicalization.

The gang’s ringleader presents himself as a cunning and enlightened critic of society, but the film pulls off a clever trick by making him fade to the background once his character is established. This isn’t Rolling Stone magazine romanticizing the Boston Bomber. No, Tristan (Eli Brown) has nothing interesting to say about why he’s doing this, so much so that scenes start to cut him off as he’s talking, slyly telling viewers that nothing much can be gained from listening to him blather on.

Once, after making reference to Hitler, he smiles and declares he’s not a Nazi. But what the viewer realizes is not that Nazism is beneath him. Rather, he’s too much a product of postmodern anti-idealism and irony-bro internet culture to hold any real beliefs.

Zoe is also struggling with who she is while being bored with school, but she chooses a different path. Run Hide Fight is about her, not about Tristan. She doesn’t understand or appreciate her relationship with her parents (Thomas Jane and Radha Mitchell) or her best friend Lewis (Olly Sholotan), but unbeknownst to her, all three of them helped prepare her to rise to a challenge she never saw coming. And all three of them are also a practical help in surviving the assault on the school, whether they are alive or not.

Run Hide Fight strikes a balance between visceral action done with practical effects and the fantasy inherent in its concept—credit for that should go in large part to May’s performance. When Zoe's father says the look in her eyes reminds him of men he served alongside in the Army, you believe it because May actually has the look. Her schoolmates and even most adults at the school are gripped by panic and indecision in the face of well-prepared attackers. They don’t have the look.

While it’s likely to go unmentioned in most media circles, female empowerment is integral to Run Hide Fight in two ways: the heroism of Zoe, obviously, but also the loving example she gets from her mother. Zoe’s own journey plays out with the guidance of her late mother, a subplot that provides just enough character development to make the action satisfying. And when the time comes for Zoe to deliver her final one-liner, the movie passes on feminism in favor of a final repudiation of the logic of mass shootings. "After all your hard work, people aren’t going to remember you," Zoe tells Tristan. "They’re going to remember me."

Facts and logic have so far proven unable to stop school shootings and mass riots, and no movie is going to change that. But that doesn’t mean we can’t enjoy a hearty dose of action-movie justice.