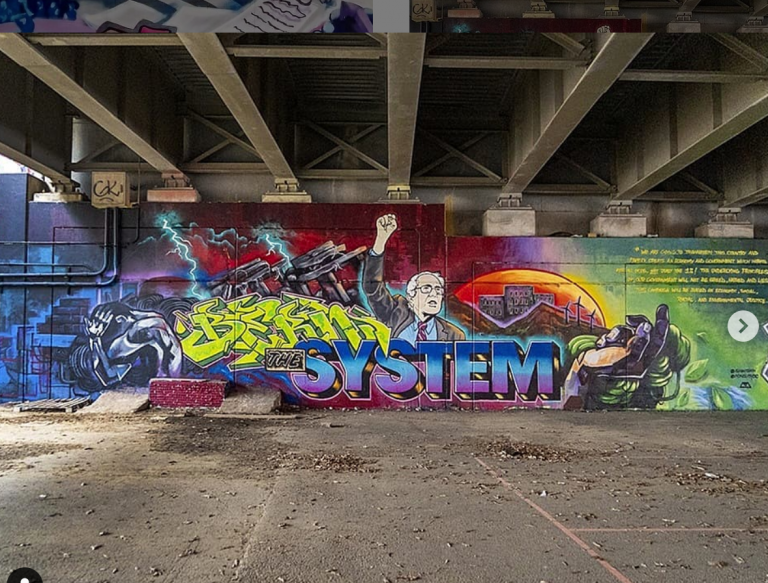 Police are investigating the defacement of a Washington, D.C., mural of Sen. Bernie Sanders (I., Vt.) as a hate crime, WTOP Washington reported Monday.

One of the artists who created the mural found a cartoon frog—known on social media as the "Pepe the Frog" meme—painted over the senator's face on Saturday. According to a police report, the mural was defaced sometime between mid-December and mid-January.

The artists who painted the mural are members of a radical artist-activist group called the 411Collective. The collective said on its Instagram page that the artists created the mural to "lift up" Sanders's movement.

"Last year, collective members painted a mural in Navy Yard, D.C., to lift up the movement behind Bernie Sanders—a movement focused on building a better future for our country, based on social, racial, and economic justice," the collective said in a Saturday post about the incident. "In the past week, it was vandalized with a Pepe the Frog head, which has somehow risen the digital ranks via the alt-right as a symbol of white supremacy and white nationalist hate. Hate has no home here!"

Sanders joined Congress in 1991 as Vermont's sole representative and was elected to the Senate in 2007. The 79-year-old democratic socialist was popular among young voters during his 2016 and 2020 presidential campaigns—notably for his support of universal health care, a federally mandated $15 minimum wage, and climate-change activism.

While innocent versions of Pepe the Frog circulated online in the early 2000s, members of the alt-right began creating racist and anti-Semitic versions of the image in the late 2010s. The Anti-Defamation League has since labeled the image as a hate symbol.