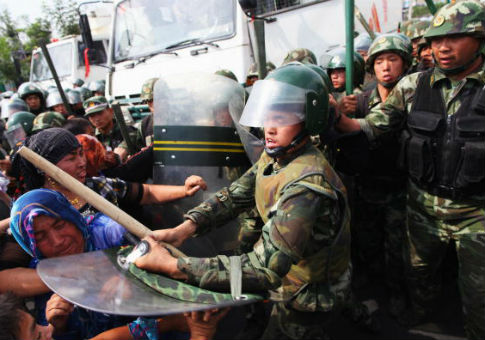 Outgoing secretary of state Mike Pompeo made the determination Wednesday that China is committing genocide and crimes against humanity because of its systematic oppression of its Uighur population.

The State Department says the Chinese government has systematically imprisoned, oppressed, and committed genocide against the Uighur population, an ethnic minority group that has been forced into labor camps in the country's Xinjiang province. Humanitarian organizations have provided evidence that China forcefully sterilizes the population and abducts children born to Uighur families.

"Beijing's atrocities in Xinjiang represent an extreme affront to the Uyghurs, the people of China, and civilized people everywhere," Pompeo said. "We will not remain silent. If the Chinese Communist Party is allowed to commit genocide and crimes against humanity against its own people, imagine what it will be emboldened to do to the free world, in the not-so-distant future."

The last-minute foreign-policy declaration by the outgoing administration is certain to anger Beijing and complicate the Biden administration's diplomacy with the communist regime. Determinations of this nature are extremely rare and compel the U.S. government to document the crimes and take appropriate action, including sanctions.

China's crimes include the arbitrary imprisonment of more than one million civilians, forced sterilization, torture, forced labor, and religious oppression, according to the State Department. These actions have been taken by the Communist Party since at least 2017.

"I have determined that the PRC, under the direction and control of the CCP, has committed genocide against the predominantly Muslim Uyghurs and other ethnic and religious minority groups in Xinjiang," Pompeo said. "I believe this genocide is ongoing, and that we are witnessing the systematic attempt to destroy Uyghurs by the Chinese party-state."

The State Department has been weighing the determination for some time, and bipartisan delegations of lawmakers in Congress have pressed the department to designate China as engaging in genocide.

Rep. Jim Banks (R., Ind.), who has been pressing the State Department to label China’s crimes as a genocide, said the action should serve as a guide post for the next administration.

"The CCP has engaged in a systematic and widespread campaign of violence, torture, detention, forced sterilization, and enslavement of Uyghurs. In a word; genocide. I'm hopeful this will force Joe Biden to reconsider his intention to cozy up to the genocidal Chinese Communist regime." Banks said. "I can't think of a better way for Secretary Pompeo to end his historic tenure."

The State Department says it will continue to investigate China's crimes and hold the country accountable for the mass atrocities.