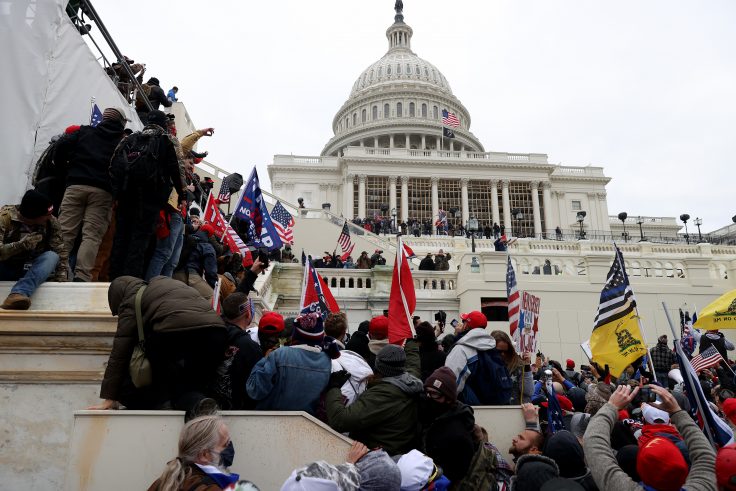 Former Clinton aide Brian Fallon and his judicial advocacy group Demand Justice are pressing corporate contributors to end their support of the Federalist Society, citing a prominent member's involvement with the White House rally that preceded the Capitol riot.

John Eastman, a law professor tied to the society, spoke at President Donald Trump's "Save America" rally on Jan. 6 alongside Rudy Giuliani, where he claimed that the election was replete with fraud. Fallon is now calling on marquee corporate supporters like Facebook, Google, Verizon, T-Mobile, and the U.S. Chamber of Commerce to stop contributing to the Federalist Society, citing Eastman's speech.

The pressure campaign is the latest move in a long-running quest to marginalize the Federalist Society, a legal behemoth that has no counterpart on the left. Even if Demand Justice succeeds, they are unlikely to affect the society's financial stability. Notwithstanding Eastman's actions, well-placed society members counseled Trump against seeding doubts about the election and helped Mike Pence rebuff Trump's request that the vice president refuse to certify the Electoral College count. But Demand Justice is still using Eastman as a wedge against the group.

"It is alarming that a senior official in the Federalist Society was goading Vice President Pence to mount an illegal coup, and corporations should stop supporting this organization the same way they've stopped donations to members of Congress," Fallon told CNBC, which was first to report on Demand Justice's pressure campaign.

Eastman chairs the society's federalism and separation of powers practice group. He is also a frequent guest speaker, having participated in seven Federalist Society events in 2020, according to his speaker's page on the group's website. Of late, he represented the president in an ill-fated lawsuit urging the Supreme Court to undo the certification of election results in four states.

Federalist Society practice groups are divided by subject matter and led by a chair who facilitates events and performs basic agenda-setting functions, one former chair told the Washington Free Beacon. The position is unpaid, and chairs take no part in the governance of the broader group.

White House counsel Pat Cipollone was key to defeating an effort to provide a security clearance to Sidney Powell, a pro-Trump lawyer hawking a fanciful theory of Chinese and Venezuelan malfeasance in the election. Powell had the president's ear in the weeks after Election Day, but she accused Cipollone of blocking her access to the president by late December. Cipollone is a longtime Federalist Society ally who is close to group leaders.

University of California Berkeley law professor John Yoo, another longtime member who keeps a regular schedule of society speaking events, advised the vice president's office about Pence's duties when presiding over the Electoral College count. He told Pence's aides that the vice president has no authority to overturn election results.

Society-aligned jurists said much the same. Former judge J. Michael Luttig, a onetime Supreme Court frontrunner held in high regard among legal conservatives, spoke out against Trump's last-ditch efforts to stop the certification of the Electoral College. Pence cited Luttig's views in a Jan. 6 letter to members of Congress explaining his reasons for accepting the results.

Even if Fallon's campaign prevails, it would not seriously compromise the mission and operations of the Federalist Society. Much of the society's financial support comes from secure, right-leaning sources, while corporate donations make up a comparatively smaller amount of overall revenue.

While the Federalist Society is positioned to withstand Fallon's broadside, Eastman has already suffered professional consequences for his appearance at the rally. Scores of Eastman's faculty colleagues called on him to step down from his perch as a professor and former dean of Chapman University's Fowler School of Law. He announced his immediate retirement and defended his conduct at length in a piece for the American Mind, an online opinion journal of the Claremont Institute.