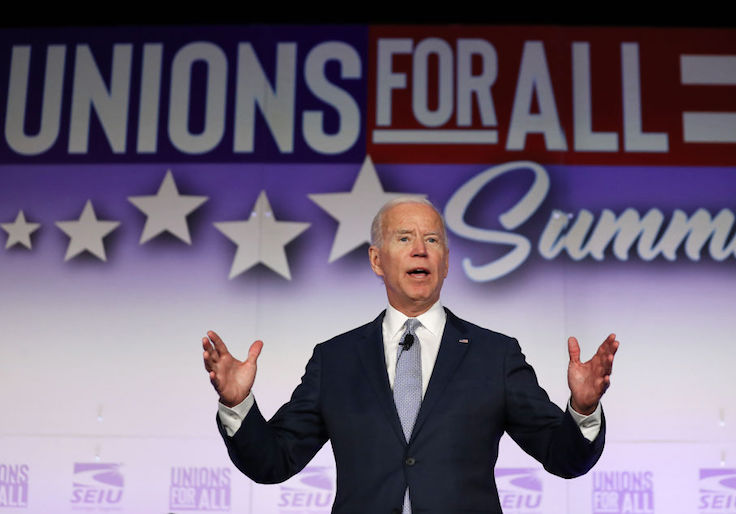 President Joe Biden fired an independent federal labor regulator within hours of taking office on Wednesday in an unprecedented move that was cheered by labor unions.

Within minutes of his inauguration, Biden threatened to fire National Labor Relations Board (NLRB) general counsel Peter Robb if he did not voluntarily resign his position as the top prosecutor at the agency. Robb, whose four-year term was set to expire in November, rebuked Biden's demand, saying it would undermine the independence of the agency and the enforcement of federal labor law.

"It was my understanding that the incoming administration intended to foster civility and unity in this country and in the governing of this country, promising to adhere to the rule of law and enabling its chief law enforcement officers the independence, free from White House interference, to enforce the laws of the United States," Robb said in a letter obtained by Bloomberg Law. "A presidential removal of the NLRB’s General Counsel prior to the expiration of his or her term violates these promises and principles."

On Wednesday evening the Biden administration made good on the threat, according to Huffington Post reporter Dave Jamieson.

NEW: White House official confirmed for me that Joe Biden just fired Peter Robb after he refused to resign as NLRB general counsel.

The White House did not respond to a request for comment.

Shortly after signing a proclamation marking the inauguration a "National Day of Unity," Biden moved to fire Robb, according to Bloomberg. The Trump appointee indicated in his letter that the new administration's Office of Presidential Personnel emailed the resignation demand at 12:23 p.m., shortly after Biden took the oath of office.

"The removal of an incumbent General Counsel of the NLRB prior to the expiration of the term by a President of the United States is unprecedented," Robb said. "I am concerned that the abrupt manner in which this is being done will cause unnecessary interference with immediate Agency operations."

"The NLRB is the agency that should defend our right to come together in a union, but instead of standing with workers, the agency’s top lawyer, Peter Robb, stood in our way," the group said on Twitter.

Now he’s gone. Good riddance. The NLRB is the agency that should defend our right to come together in a union, but instead of standing with workers, the agency’s top lawyer, Peter Robb, stood in our way. #FightFor15 #FirePeterRobb

It's now official, he gone. pic.twitter.com/EP6sY3GFZL

Labor watchdogs decried Biden's hastiness in attempting to remove Robb 10 months before his term was set to expire. Mark Mix, president of the National Right to Work Legal Defense Foundation, said it would compromise the agency's mission.

"This unprecedented move to oust NLRB General Counsel Robb before the end of his Senate-confirmed four-year term is the very opposite of a return to ‘normal’ and a disturbing sign of just how far the Biden-Harris Administration is willing to go to pay back the union bosses that helped put Biden in the White House," Mix said in a statement. "The reason Big Labor officials are so eager to oust Robb is that he has frequently defended the rights of rank-and-file workers who are the targets of union coercion."

The NLRB did not return a request for comment.