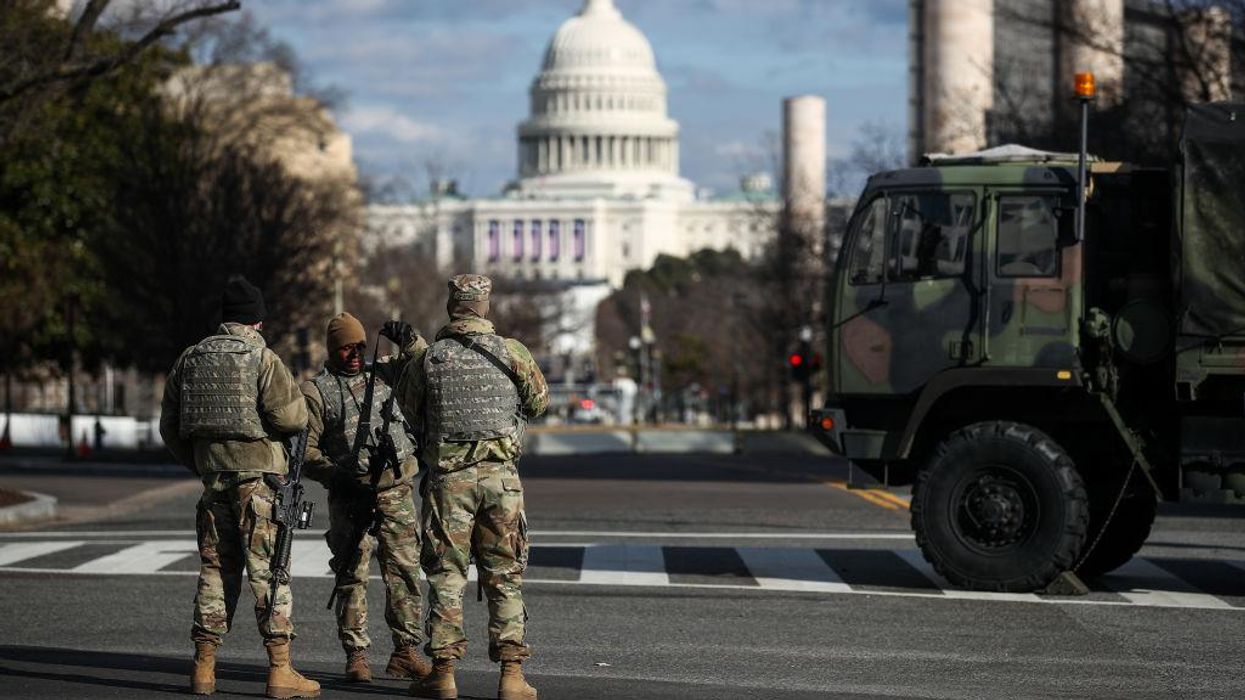 When our border was under assault by the drug cartels and human smugglers, the entire political class, media, and governors opposed the deployment of the National Guard to defend the sovereignty of the union. When cities were burning out of control night after night, they opposed using the military to stanch the bleeding in the streets. Now, these same people seem OK with 25,000 troops being paraded around in D.C. and in some state capitals with no end in sight. Worse, the military is being purged of "far-right extremists," and it wouldn't be surprising to learn that that encompasses all Trump supporters.

Where is this coming from, and where is this headed? That is the question all GOP governors should be asking – a question that should prompt them to immediately rescind the deployment order.

Why are we suddenly "vetting" our own soldiers in order to perform a "mission" in a way that appears to be an ideological litmus test? How long will these soldiers remain? These are the questions governors must ask before they sign off on indefinite deployment of their state's Guard.

"These are vetting efforts that identify any questionable behavior in the past, or any potential link to questionable behavior, not just related to extremism ... we're not asking questions right now," said Jonathan Hoffman, assistant to the secretary of defense for public affairs. He noted that they are not even asking questions, but "out of abundance of caution taking action and immediately removing them from the line," in describing the purging of people while looking at their history and social media.

.@chiefpentspox on National Guard individuals removed from their duties: "These are vetting efforts that identify a… https://t.co/BOzrmJ6DMZ

And as has been the case throughout the COVID restrictions, they are encouraging fellow Guard members to report one another.

Objectively speaking, what does this look like to you? Where have we seen this throughout history?

Put another way, can you imagine if these comments were made and these actions taken in support of Trump's inauguration four years ago?

What is going on today is as shocking as it is chilling. What is even more shocking is the silence from most GOP governors who sent national guardsman to D.C. Texas Governor Greg Abbott expressed concern about the ideological litmus test, but only threatened to cut off cooperation in the future. He needs to go a step farther and commit to cutting off soldiers now until the purge stops and until there is a timeline and a justification given for keeping the soldiers there.

The thousands of people pouring over our border in 2019 were unmistakable. Plus, protecting our border is what our Founders had in mind as the purview of the military. Yet, the New Mexico governor pulled the National Guard from her own border with Mexico while facing a crisis of human and drug smuggling and is now sending them to D.C. for Biden's military junta.

Keeping soldiers in our cities with no prima facie violence occurring anywhere is a recipe for a military junta-style government, absent the feds sharing legitimate intelligence with these governors justifying these unprecedented moves.

The purging is not just about taking these soldiers off this particular mission. It's inconceivable that once they are flagged for concern and disqualified from duty at the inauguration (and beyond?), this will not be a black mark on their careers forever. Governors need to stand up for their guardsmen.

Two weeks after the Capitol attack with zero evidence of any residual violence on the streets, why is D.C. a military zone and why are some state capitals following suit? Just this Monday, 11 NYPD officers were injured in a Black Lives Matter riot, yet the American people haven't even heard about it. When BLM was burning D.C. night after night, and after 60 Secret Service agents were injured at an attack near the White House, Pelosi lambasted Trump for using the military, even though he only used it when the violence was out of control.

"We are concerned about the increased militarization and lack of clarity that may increase chaos. I am writing to request a full list of the agencies involved and clarifications of the roles and responsibilities of the troops and federal law enforcement resources operating in the city," Pelosi wrote in a letter to President Trump on June 4, 2020. "Congress and the American people need to know who is in charge, what is the chain of command, what is the mission, and by what authority is the National Guard from other states operating in the capital."

Joe Biden accused Trump of "preening and sweeping away all the guardrails that have long protected our democracy."

Which guardrails? Military loyalty to one party? Full censorship of any opposition? Banning protests and access to elected officials? Muzzling us with masks and lockdowns?

Now that the military is being used in greater numbers without clarity of a time limit for a speculative threat that is not evident on the streets – and they are engaging in the most comprehensive vetting of soldiers ever – why aren't Republican governors raising similar concerns? Mitt Romney criticized Trump for using the military when D.C. was on fire. Where is he now?

Ultimately, it is up to the governors to put an end to this charade. Every one of them needs to ask what they would do if Trump had surrounded himself with 25,000 troops and destroyed the military careers of anyone who supported Hillary Clinton.