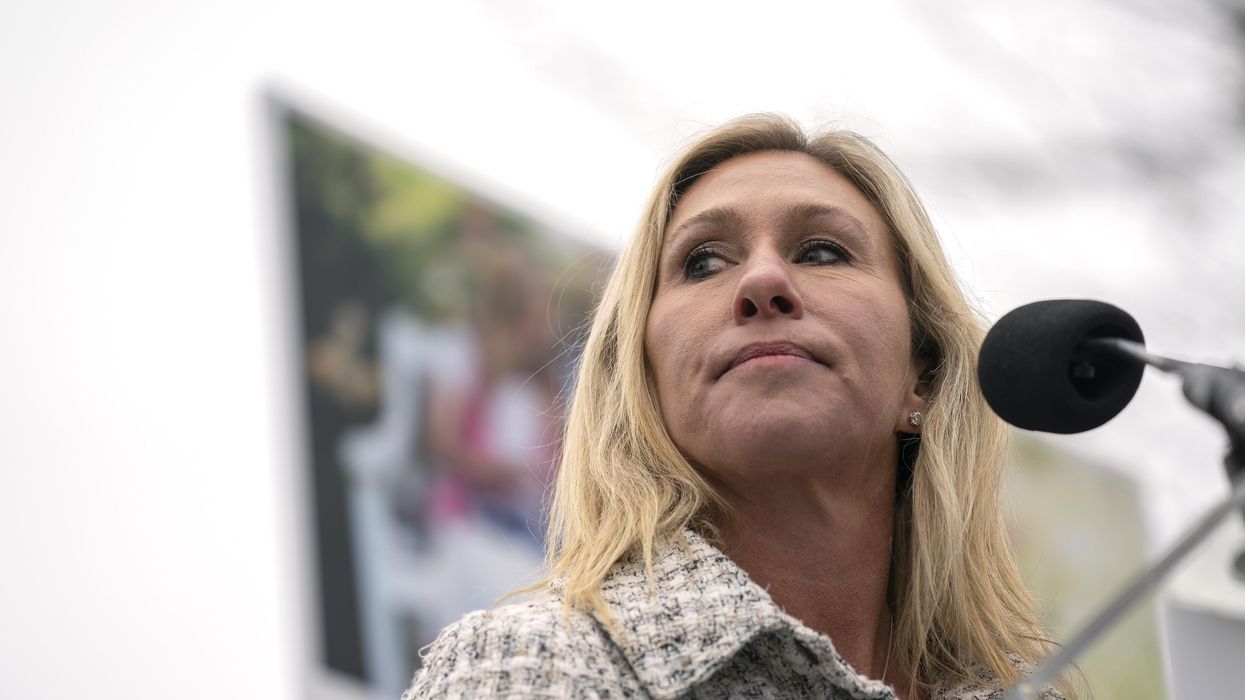 Student survivors of the Parkland, Florida, mass killing are calling on Rep. Marjorie Taylor Greene (R-Ga.) to resign from Congress after she said that the massacre was a "false flag" to push for gun control.

Greene took to her Twitter account and cleared up her position on gun control and especially its role in schools.

What did she say?

According to a Wednesday report from
BuzzFeed News, Greene in a 2018 Facebook post questioned the Parkland shooting.

In the
post, she shared a news article about the pension of a Marjory Stoneman Douglas High School resource officer. The officer in question did not intervene in the mass killing, which took the lives of at least 17 people and injured many more.

Responding to Greene's post, a commenter called Stacy wrote, "It's called a payoff to keep his mouth shut since it was a false flag planned shooting."

Another commenter added, "Sounds like a pay off, doesn't it."

Greene responded, "Yes it does!"

What has been the response?

David Hogg, former student at Marjory Stoneman Douglas High School and March for Our Lives co-founder,
tweeted, "Marjorie Greene should resign. If you spread conspiracies about mass shootings there should be no place for you in congress [sic]."

If you spread conspiracies about mass shootings there should be no place for you in congress.

He later tweeted directly at Greene — who has not responded to his remarks at the time of this reporting —
writing, "Why did you call the shooting at my high school a false flag? 17 classmates and staff died — spreading conspiracies about this tragedy is disgusting."

@mtgreenee Why did you call the shooting at my high school a false flag? 17 classmates and staff died- spreading co… https://t.co/Xpnmh86e4M

Cameron Kasky, former student and March for Our Lives co-founder, told the outlet, "She should be removed. She should be punished. ... [But] it's probably not going to happen."

He added, "There's somebody literally making laws that denies the Parkland shooting. I mean, what the hell is next? It's inhuman what these elected officials are doing."

"Elected officials pushing Parkland conspiracies — this is not some symptom of the Trump era; this is just the Republican Party fundamentally. She'll get away with it. Of course she will. She's a Republican."

Fred Guttenberg, father of a teenage Parkland victim,
wrote, "I know you have met Parkland parents. This is my daughter Jaime, she was killed that day. Do you still believe this? Why would you say this?"

.@mtgreenee, we have never met. It appears you think or at one time thought the school shooting in Florida was a f… https://t.co/6XVrXHdRGD

Greene did not directly respond to the 2018 controversy, but instead shared a lengthy message about gun-free school zones and the absurdity of the student resource officer's stately pension.

"'Gun-free' school zones are a FAILURE. Laws that prevent legal ownership of firearms turn schools into targets," she wrote. "As someone who was personally locked in a classroom in 11th grade due to a fellow student who brought guns to our 'gun-free' school intent to [sic] kill others, I'm proud to say I'll cosponsor the Safe Students Act to repeal 'gun-free' school zone laws and allow Americans to protect our children."

She added, "I personally understand the fear as a student when there is no good guy with a gun to protect us from the bad guy with guns."

Greene later took aim at the school resource officer in question who did not intervene in the Parkland shooting.

"Scott Peterson allowed children to be left defenseless against an active shooter," she wrote. "When he was supposed to protect them, he was a coward and refused to go in. He allowed 17 people to die."

"Why in the world would he received such a lucrative pension after the tragic school shooting at Marjory Stoneman Douglas High School?" she demanded. "It's sickening. The shooter should have never been allowed to set foot on campus and he should have been expelled long before he murdered people."

She concluded, "Our children are the most important people in our country and they should be protected by good guys with guns."