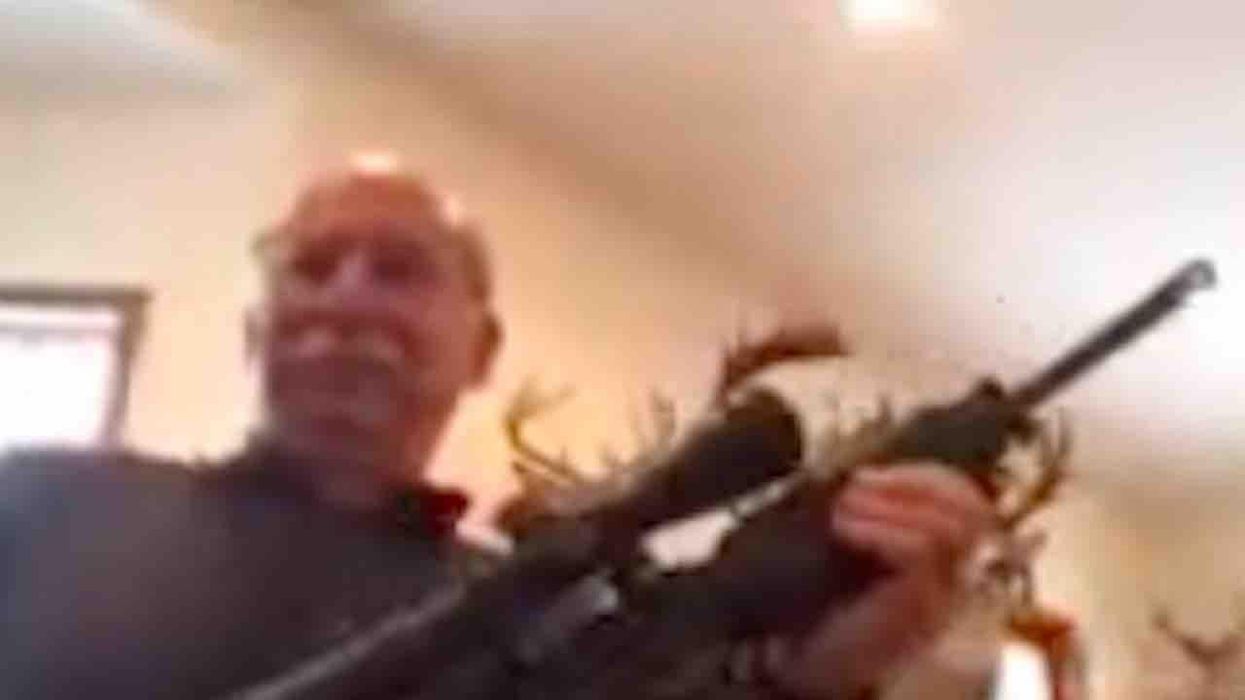 A Michigan official is facing backlash for displaying a rifle during a virtual public meeting Wednesday after a citizen complained about "gun culture" in the area and what she saw as officials' support for the Proud Boys.

During the livestreamed meeting, Grand Traverse County Commissioner Ron Clous was in his home and said he was reacting to Keli MacIntosh's public comment concerning a Second Amendment resolution the board passed in March, the Traverse City Record-Eagle reported.

MacIntosh also questioned what she called the board's support of the Proud Boys and asked commission Chairman Rob Hentschel to issue a statement denouncing the group, the paper said.

At that point, Clous was seen on video stepping away from his webcam:

A little over 10 seconds later he returned with a rifle and displayed it at angle across his chest before putting it down and out of camera view. Clous displayed the rifle for about five seconds:

How did the citizen react?

MacIntosh told the Record-Eagle she felt threatened by Clous' actions.

"This guy is in the middle of a government meeting brandishing a weapon. Why would I not think they were trying to harm me?" she asked.

What did Clous have to say?

Clous told the paper he grabbed his rifle and displayed in response to the board being asked to denounce the Proud Boys, adding that he won't denounce any group, whether it's Black Lives Matter, the NFL, or an LGBTQ outfit.

"The only thing I know about [Proud Boys] is when they came and spoke to us," he added to the Record-Eagle, noting the group may have been the most respectful among the groups that spoke at the March meeting.

"They were decent guys, and they treated us with respect," Clous added, according to the paper.

What did the board chairman have to say?

Hentschel — who can be seen laughing when Clous came back to the meeting with the rifle — told the Record-Eagle he had no problem with Clous' actions.

"I saw it across his chest, and I thought it was ironic of him to do that," Hentschel told the paper. "The person was talking about guns, and he had one across his chest. I didn't see him do anything illegal or dangerous with it. He wasn't threatening or brandishing. He was just holding it."

More from the Record-Eagle:

Hentschel said there is no board policy against open carry or concealed carry of firearms at board meetings that take place at the Governmental Center.

He said he isn't even sure it would be legal to have such a policy, though someone open-carrying at a public meeting might scare some people.

"It's not a great idea," Hentschel noted to the paper. "Personally, I would not feel unsafe."

What did a local attorney and activist have to say?

Holly T. Bird, a local attorney and activist, told the Record-Eagle she was upset by Clous' actions, saying that holding up the rifle could reflect support for the Proud Boys and the "insurrection" on Jan. 6 at the U.S. Capitol.

"Everyone knows that if you're walking down the street, and someone flashes a gun at you, it's a threat," Bird noted to the Record-Eagle. "To have a public official do that during a public meeting is horrendous."

Bird also said it doesn't matter that Clous displayed the rifle in his home, the paper reported.

"You don't have to be next to someone to make a threat," she added to the Record-Eagle. "You can communicate in other ways, including over the internet."

What did the county administrator have to say?

County Administrator Nate Alger told the paper that while he didn't see the rifle incident, he still "can't think of any laws that were violated, and I don't know of any policies that were violated. It got people's attention. If we have to look further into it, we certainly will."

Here's video of Wednesday's meeting. Just after the 1-hour-and-31-minute mark, Clous exits from his webcam frame and then returns with his rifle about 10 seconds later: