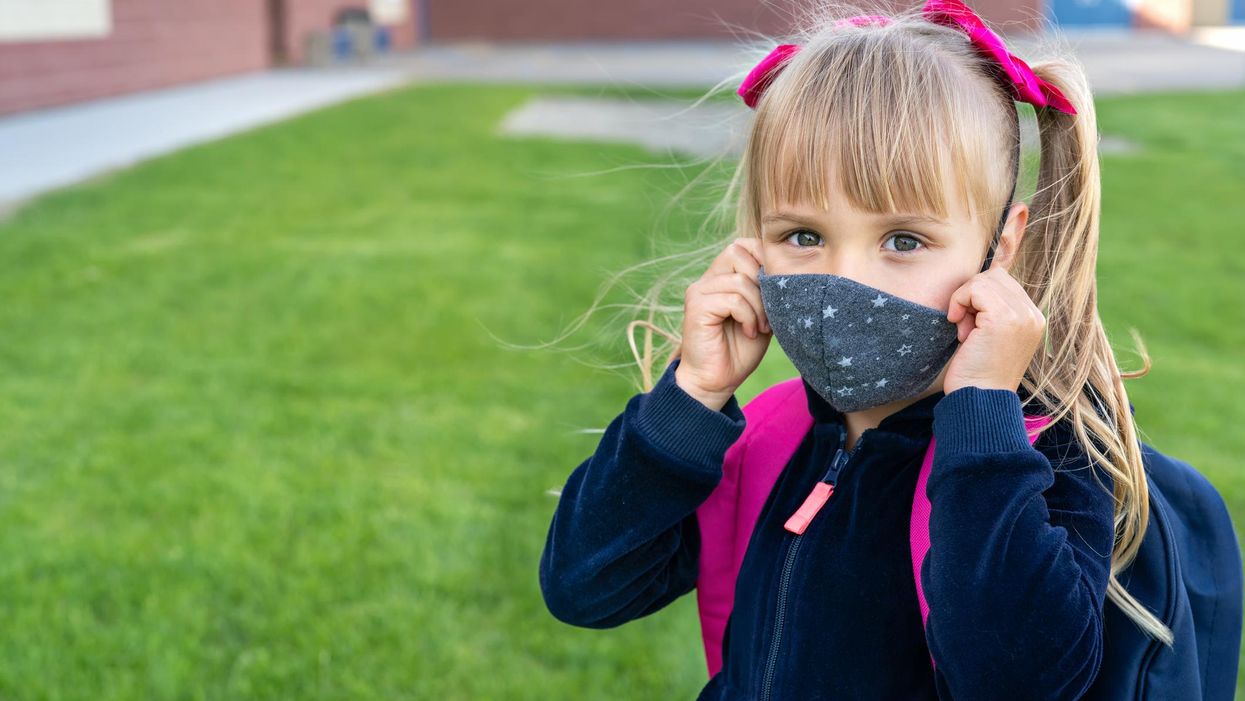 What if I told you a day would come when Democrats take over the government and children will be treated worse than caged animals in schools, all for a virus that doesn't really affect them? That they will be forced to kneel on the floor without a chair or normal desk, without recess, and with a dirty mask covering their most sensitive body parts for hours on end? In other words, a more dystopian version of North Korea. Well, this is happening in the red state of Alaska with a Republican governor.

MustReadAlaska.com is reporting that one school in the Anchorage school district is forcing children to kneel on pads on the floor instead of sitting in chairs, while using their chairs as desks. Somehow there is "science" behind this child abuse, alongside wearing a mask for six hours a day. These preschool and lower school children at the Whaley School will also bring a five-gallon utility bucket to hold their lunch, jackets, and supplies in lieu of a locker. Disgruntled parents sent pictures of the classroom that looks like a setup the courts would deem cruel and unusual punishment for terrorists.

Schools in Anchorage have been closed since last March, and only younger children are returning for steady in-person classes. However, if this is what in-person schooling looks like, perhaps it is better the children stay home with their parents and live a normal life.

It is truly hard to overstate the developmental and psychological damage that will befall a generation of young children who will now think this is normal. There is zero benefit to this in terms of the virus, only child abuse-level destruction and collateral damage.

Remember, despite sharp disagreements about the virus, it is now clear that children are not in danger and they are not vectors of spread, even if masks and these voodoo measures worked, which is hard to suggest after seeing the spread in California nine months into a mask mandate.

But what is further shocking is that Alaska is not California. How can Republican Gov. Mike Dunleavy allow the school shutdowns, and the child abuse among those schools that are open, to persist for a single day? Everyone will focus on Biden's new national mask and lockdown policies, but the truth be told, all of this has already been going on under the stewardship of most GOP governors.

I've been blessed with a beautiful 9-month-old girl. Is there nowhere in America I can live for this child to grow up showing her face, made in the image of God's face, where she will not be criminalized for not suffocating her lungs in just 15 months from now? Is that too much to ask from GOP governors? Is that too "right wing"?

Moreover, when the Constitution is violated, it's not surprising that liberals suddenly shun the federal laws they claim to champion. Sections 300.14-300.18 of the Individuals with Disabilities Education Act (IDEA) stipulates that children with exceptionalities be educated in the least restrictive educational environment. Liberals use this to create expensive mandates, but somehow ignore the commonsense application when it comes to children with disabilities. According to Must Read Alaska, Pre-K–2 and K–6 self-contained special needs programs in Anchorage will be opening up in this oppressive environment.

Aside from the GOP perfidy in many states, now that Trump is out of office, watch for Democrats to universally endorse in-person schooling again. But they will not endorse science, the Constitution, and humane treatment of children in school. This school in Anchorage is the model of what "reopening" will look like, which will render in-person schooling even worse than online classes, in the long-term damage inflicted upon the bodies, minds, and emotions of children.

Even starting at the ludicrous premise of masks being effective in stopping the spread, we already know that fewer children have actually died in 2020 despite the pandemic. Data from the Human Mortality Database shows that not only were there no excess deaths among children in the U.S. and elsewhere, there was actually a drop in all-cause mortality. Some of the drop could be the result of children being sheltered more at home and less prone to accidents, but how many will die in the long term from the irreparable damage of lockdowns – all for a virus that is clearly not an epidemic for them?

Last year, researchers at the University of Washington and the University of California published a study in JAMA estimating a cumulative loss of 5.53 million life years from this generation of children due to lost educational attainment. Opening schools in such a disruptive way won't close that gap much, not to mention the emotional, psychological, and behavior damage it will inflict upon the children.

There are 27 GOP governors, and Trump won 83% of the counties. This is the question conservatives need to ask every Republican school board member, county commissioner, legislator, and governor: If MS-13 and illegal alien sex offenders were able to find sanctuary in blue states during Trump's presidency, aren't American schoolchildren entitled to a sanctuary against child abuse in red states under Biden?