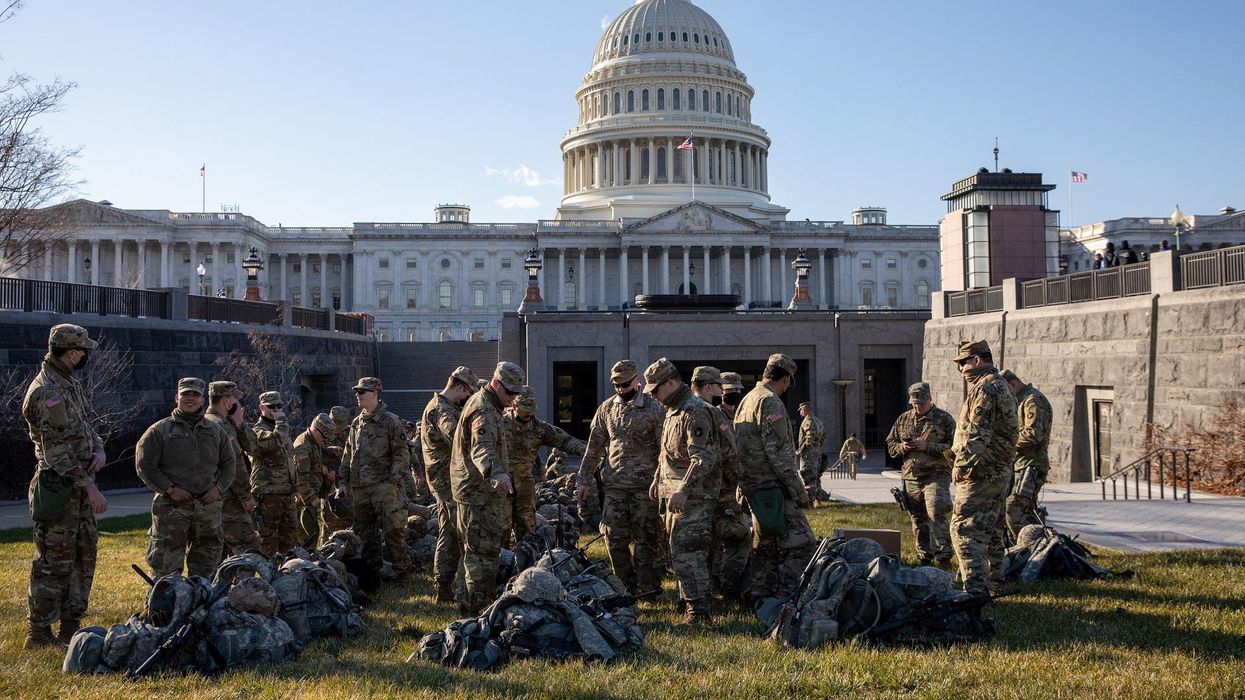 Several outlets confirmed Thursday night that thousands of National Guard troops sent to provide security for the inauguration of President Joe Biden were kicked out of the Capitol and other federal buildings the following day—with several hundred or more sent to the cramped quarters of a single parking garage.

Politico reported that thousands of soldiers were "forced to vacate congressional grounds" Thursday, kicked out of the buildings they had guarded for weeks with some banished and packed into the Thurgood Marshall Judicial Center garage.

"Yesterday dozens of senators and congressmen walked down our lines taking photos, shaking our hands and thanking us for our service," one Guardsman told the outlet. "Within 24 hours, they had no further use for us and banished us to the corner of a parking garage. We feel incredibly betrayed."

Two Guard soldiers, who spoke on the condition of anonymity, said that they had been given no explanation as to why they were being relocated early Thursday afternoon, and said that they were without electrical power, heat and adequate restroom facilities. One Guard soldier estimated that there were 1,000 of them sharing a single portable restroom stationed outside of the parking garage.

One soldier told Task & Purpose, ""There's one toilet for somewhere between 500 and 100 people, there's no water fountains or anything, no power strips to charge our radios and cell phones, which have been our primary mode of communication since we've been here. It's pissed a lot of dudes off."

He added, "It's f***ed up because it just shows how politicians really feel about the National Guard. Leaving our families for the last two weeks to come down here … it's certainly important and historic, but the day after inauguration you kick us literally to the curb? Come on, man."

Following the reports, Rep. Peter Meijer (R-Mich.) expressed outrage over the "disgraceful treatment" of the troops, and called for "accountability."

He provided an update soon after, tweeting, "[T]he troops who had been taking rest breaks outside and in parking garages on Capitol Police orders have been given an apology and are being moved back to the Capitol complex and Capitol Visitor Center."

Update: the troops who had been taking rest breaks outside and in parking garages on Capitol Police orders have bee… https://t.co/Z7zSRkOQhS

Roughly 25,000 National Guard troops from across the nation were sent to the Capitol and cleared to use lethal force against fellow Americans in the face of any threat following the Jan. 6 attack on the Capitol by a mob of Trump supporters.

Leading up to Inauguration Day, federal authorities vetted the service members in search of any "extremist views" or signals of an inside plot that might pose a risk to Biden or members of Congress. A dozen or so Guardsmen were removed from the security detail following the investigations.