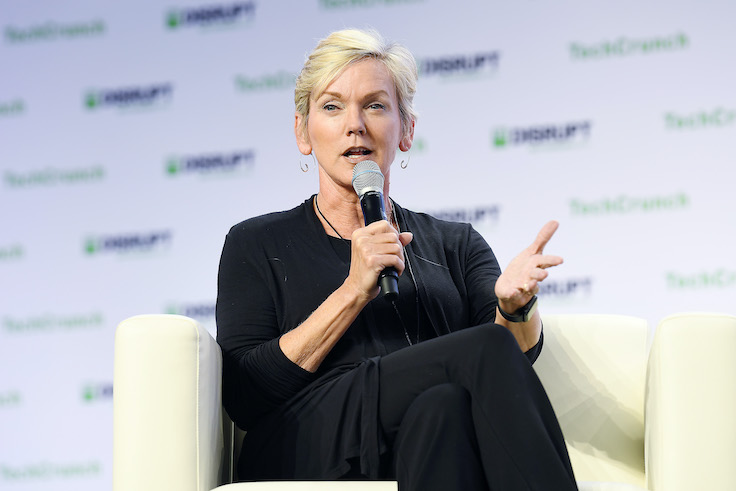 Former Michigan governor Jennifer Granholm, President Joe Biden's pick for energy secretary, could pocket up to $5 million for stepping down from a prominent position with a Silicon Valley energy company.

Granholm will relinquish her spot on the board of Proterra, Inc., an electric-vehicles manufacturer, if she is confirmed by Congress. She will also sell off all stocks in the company, resulting in a windfall. Disclosure forms show that Granholm's stock in Proterra is valued between $1 and $5 million. She will also divest from other energy companies, including First Solar, a solar-panel company, and Duke Energy, an electric company. These investments would bring Granholm an additional $2,000 to $30,000.

Granholm's close ties to the energy industry are likely to raise conflict-of-interest concerns. In addition to her role with Proterra, Granholm does consulting work for startups and businesses in the clean-energy, transportation, and advanced-manufacturing sectors. As energy secretary, Granholm would push Biden climate policies that would provide a lucrative boost to those sectors.

The industry has already seen an uptick since Democratic victories in the 2020 elections and Georgia runoffs.

"Renewable energy stocks have shot up since the Georgia Senate runoff and it's reasonable to ask why that would be," said Josiah Neeley, an energy expert at the R Street Institute. "If it's because the prospects of cheaper, more efficient renewable energy have suddenly brightened, that would be a good thing. If it's that the renewable industry is more likely to get more subsidies and loan guarantees, that might be good for the companies, but not so good for the taxpayers."

The renewable-energy sector will expand under Biden as he seeks to hit net-zero greenhouse-gas emissions by 2050. This goal would require a massive electric-vehicle push. Companies such as Proterra, a leading electric-bus manufacturer, could stand to benefit from such policies.

Granholm also helps run Granholm Mulhern Associates, a firm she co-owns with her husband, Daniel Mulhern. As part of her role with the firm, Granholm provides consulting services to clean-energy companies. The firm will dissolve when she leaves the energy sector—but Mulhern intends to launch a new consulting firm solely in his name, which will bring over his current clients.

Andrew Bates, a Biden transition spokesman, told the Washington Free Beacon that Mulhern will divest from his stocks, which include between $16,000 and $75,000 in First Solar and Duke Energy. Bates said that Mulhern will not consult with energy companies.

Granholm is not the only Biden nominee likely to raise conflict-of-interest concerns. Gen. Lloyd Austin, Biden's pick for defense secretary, stands to make up to $1.7 million by leaving the board of defense contractor Raytheon, while Janet Yellen, Biden's nominee for treasury secretary, was paid more than $7 million for speeches to Wall Street firms and other major corporations.

Granholm did not respond to a request for comment.